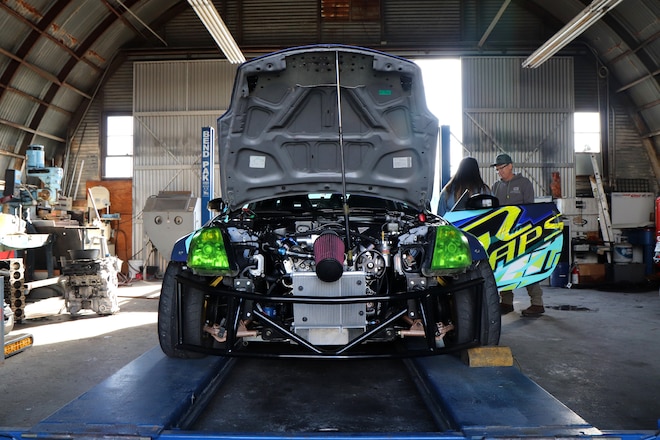 Drifting is popular enough and the good ol' U.S. of A. big enough that we don't necessarily see a huge reduction in events when pro and pro-am competitions hibernate for the off season (thanks, grassroots guys!) But every spring, just try and stop us from getting amped for the impending sideways battles on the horizon from championships large and small. It's why for the past three years we've been hitting up The Drift League pro-am events, and also why we dragged ourselves out of bed early on a recent Sunday to watch Drift League cars get scrutinized at the series' annual Tech Day in advance of the 2020 season opener.

From a competitor standpoint, Tech Day gives challengers an early opportunity to have their cars gone over with a fine-toothed comb before they ever see action, and also time to bring that car up to spec. From a media standpoint (the general public is usually not permitted to check out Tech Day), we get the best kind of early look at the entries, as we get to shadow the scrutineers as they go over the car looking for primarily safety violations - usual suspects include (but are not limited to) prop shaft loops, tow hooks/straps, functioning kill switches, etc.

A mix of old and new players made their Sunday morning Tech Day appointments at MotoIQ headquarters in Gardena, Calif. We cheered a little on the inside when Jon Shaffer rolled up in his Spacious Garage LS Nissan 240SX; last year Jon was in really good shape in the point standings heading into the second half of the season before he had an untimely failure that sent his S14 into the big bank wall at Irwindale Speedway and dashed his hopes for a series title or one of the three Formula DRIFT Pro 2 licenses that are issued at the end of the season to The Drift League's top point earners. TDL veteran Don Boline also showed up in his familiar G2 Wraps 350Z, but something new and exciting lurked under the hood of his trusty Z33: an LS V8. For as long as we've been watching Don, he's pushed that Z's VQ V6 as far as it could go, and now that he's rocking GM power, we're guessing it's gonna take his game to a new level.

As far as new drivers to The Drift League that showed up to Tech Day 2020, we got to catch up with our old friend Jeff Le, formerly of RAD Industries; Jeff isn't entirely new to pro-am competition, having tried his hand at Top Drift a few years back, but this year he's got a new power plant under the hood of his S13, a Toyota 2JZ-GTE, and we're expecting good things from him and his "TRD" 240SX. Top Drift's Cameron Crawford is also bringing his V8 S13 to TDL, and while they weren't at Tech Day, dudes like Shawn Illingworth in his 350Z and Evan Bogovich in his C6 Corvette will be among another 20 or so other competitors chasing after this year's title.

In 2019, Tony Cisneros and his V8 S14, Keoni Rodrigues in his 2JZ S13, and Pablo Cabrera in his V8 S14 ended the season atop The Drift League points, 1-2-3 respectively, and earned their FD licenses because of it - who will it be this year? The story begins unfolding March 7th at the House of Drift, Irwindale Speedway, for Round 1 of 4; we will have a report from the comp, as well as a gallery of all the pretty drifty images your eyes can take. In the meantime, enjoy our photo haul from TDL's Tech Day 2020.