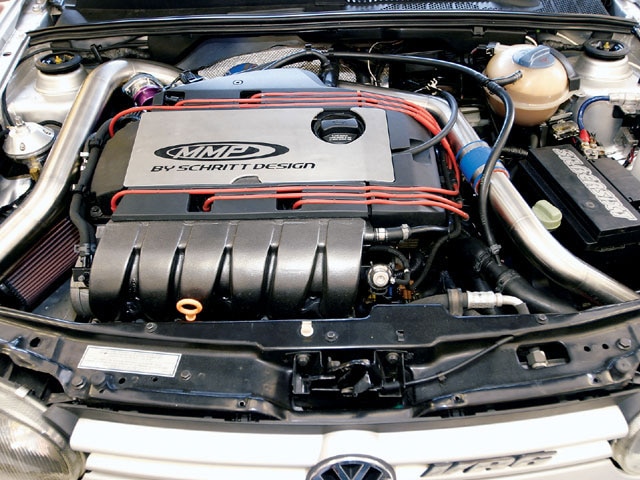 We were a bit disappointed MMP didn't bring out Goldmember again this year - the Mk2 VR6 turbo that surprised everybody at etGP03. We'd heard rumors of them attempting to hit 700hp at the wheels with that car, so we had high hopes to say the least. MMP did, however, bring a car that was perhaps more of an all-around competitor. It was a mild-looking Mk3 GTI with a stout stance and meaty tires. The car was silver and donned a set of gunmetal OZ Superleggera wheels. The exterior was fairly stock, with the exception of a Euro VR6 lip on the front of the NA bumper and the grumble of an exhaust-equipped VR6.

The interior didn't suggest anything extra-ordinary lay beneath the hood; you might say it was a wolf in sheep's clothing. The motor, however, was a different story. Apparently, it had a stock bottom end, but the entire intake tract had been custom-designed by Mike Schritt, who was responsible for Goldmember and loads more of MMP's turbo VR6 cars.

Dyno
As the car rolled onto the dyno, people began to gather round. The hood had been open all morning, so everybody was curious to see what power this thing would make. Mike is never one to disappoint and continues to amaze us with the motors he builds. We would call him an evil turbo genius, but he's Canadian so it may be against our Constitution.

Once the car was strapped in place, MMP tried to roll it slowly through the gears until fourth, but at one point it got on boost and we got a sneak peek of the chaos this car was about to create. As soon as the GTI was shifted into fourth, the throttle was completely depressed, and shortly after, the car began whooshing from the open-atmosphere wastegate. Not long after the car began accelerating, it also began to spin the wheels on the dyno. It did this three times in a row, ending with a few guys clapping at the achievement. Not bad for a bunch of Canadians!

Drag Race
Right out of the box, Phil Boznik and Momentum Motor Parts' GTI VR6 turbo posted impressive times - 13.276sec is nothing to sneeze at. Similar to last year, MMP brought out a VR6 turbo pushing serious power, and again it had no significant issues with the car. Whenever you run custom turbo setups on a motor not intended to house forced induction, running the motor hard in temperatures that exceed 90 degrees can spell disaster with a capital boom. But MMP never seems to be affected by this general rule. While the GTI turned inconsistent times all day, more than likely due to the motor generating boost too fast for the street tires to cope, it appeared this car most definitely would have been capable of much more if the etGP rules had permitted the use of drag slicks.

Read all about a custom supercharged 1999 Volkswagen GTI, brought to you exclusively by the experts at Euro Tuner Magazine.