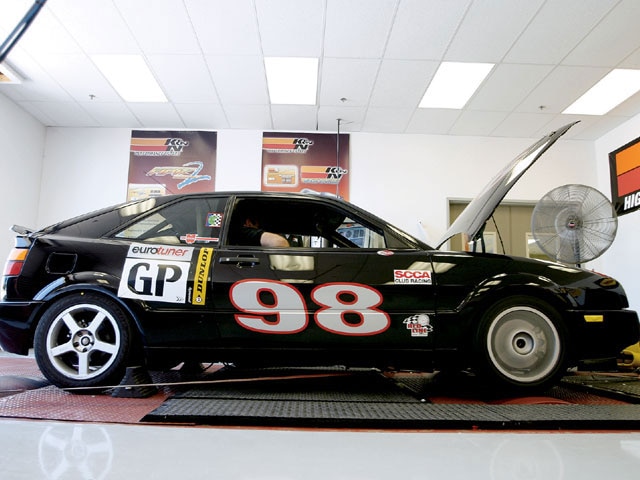 247-Parts.com believes in suspension.As such, Gary Semerdjian, the owner, brought out a car that best represented his company. It also happens to be the car he races in the SCCA ITS class, so the amount of motor mods the company could perform was hindered by class specs. The car was a black '92 VW Corrado SLC. This made it a record-setting year for Corrados in the etGP, as there were now two of them.

The primary focus of this car wasn't so much the engine as it was the suspension. The car, however, did have some motor modifications to liven it up at the top end of the rev range. The real beauty of this car is that nothing makes it stand out from any other Corrado you might see driving on the street, but under the skin lies a potential road course monster.

Dyno
A lot of other teams in the competition spent time prepping their cars for the dyno runs. Gary's was one of the few that didn't. He rolled the car onto the dyno, popped off his three runs and went and sat down in the shade. It seemed very nonchalant, but when you have a virtually stock motor, there aren't many variables to worry about on the dyno. The car was consistent in all three of its pulls, keeping the horsepower separation within 1hp each time. The largest separation was the 3.96 lb-ft torque difference between the car's highest and lowest run.

The motor is close to stock in most senses, with the biggest modification being a set of 2.8-liter forged JE pistons. The rest of the internals were untouched, and the only other motor modifications were the addition of a 247-Parts.com exhaust system and header, along with plug wires and an intake from Euro Sport. A 247-Parts.com oil cooler kit was also added to keep the oil temp down when driving the piss out of the car on the track, and a Quaife LSD was employed to keep traction through the corners. The mods are limited on this car, but they are definitely the right ones if your intention is to road-race a VR.

Drag Race
When the 247-Parts.com car pulled to the staging lights, we were keen to see what it could do. The Corrado, which is built to ITS spec, isn't designed to run the quarter-mile, thus we had no clue what kind of numbers to expect. On the first quarter-mile attempt, the car clicked off a 15.207sec pass, then backed that up with an even sadder 15.948. As the day progressed, Gary got more comfortable with the track and the launch characteristics of the car, and at 2pm the car clicked off its fastest time of the day with a 14.698. This quarter-mile time ensured 247-Parts.com the title of the slowest car on the strip at the etGP. Just looking at the car, though, it's obviously built for the road course.