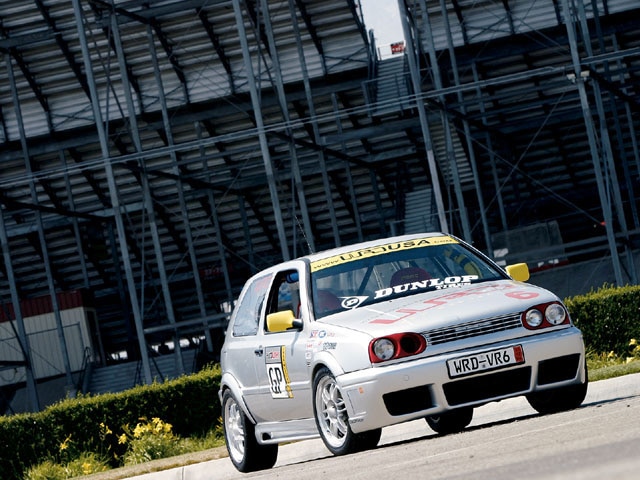 This is John Gardner's (owner of WRD) first time running in etGP, and he came out to make an impression. With a race-prepped all-motor VR6 and a gutted shell, you knew he had a point to make. The GTI VR6 had a Rieger R-RX body kit and red headlights. Maybe it was a weird color combo, but once the motor was fired up you forgot about everything else.

The car sat on Enkei RPFI wheels with slotted, stock-size rotors peering out from behind them. As John tells it, the car had been completely rebuilt for the event following a crash at a track not more than two weeks before. The interior was a web of bars welded into a 'cage, and the only piece of stock interior left was the dashboard.

Dyno
With a turn of the key the car fired up, and everybody stopped what they were doing to see what was making all the racket. This car was loud and if it performed at all like it sounded, we were about to get a good show. Once it was trapped down and rolling, the crowd found their spots and plugged their ears.

After the third run, the VR6 settled down and the numbers were set. John had hit 223.5hp at the wheels. Impressive isn't the word for it; that's quite a feat with an all-motor VR. We're neglecting to mention it revs to 7,000 rpm so quickly you couldn't stop it from hitting the limiter at 7,200K. It just goes to show that with a bit more displacement and a big valve head, 200-plus horsepower is possible with an all-motor VR6.

Drag Race
John repeatedly showed off in the burnout box doing gratuitous first, second and third gear burnouts. While his 13.633sec quarter-mile pass may not look impressive in this field of cars, remember it was the fastest naturally aspirated car, beating the Stasis A4 quattro. WRD's VR6 monster also beat the supercharged R32, although WRD only dipped into the 13s twice all day, proving how tricky it was to get this high-output VR6 to hook up. We feel obligated to mention there were tire fitment issues that resulted in incorrect Dunlops being ordered. Because of this, WRD's gearing was adversely affected and the rear tires rubbed on the bumper (which we allowed WRD to remove). If the correct-diameter tires had been available, we're confident another tenth could have been shaved off the times - although it wouldn't have affected the battle for position.

Read all about a custom supercharged 1999 Volkswagen GTI, brought to you exclusively by the experts at Euro Tuner Magazine.