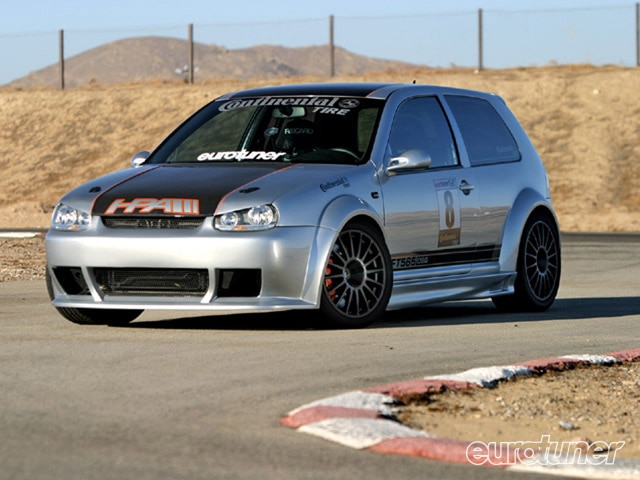 HPA Motorsports
2004 VW R32
*Overall Winner, Best AWD, Best Drag
HPA Motorsports knew they had neither the most powerful nor track-ready car coming into etGP, but the Canadian tuner set itself a goal to build a well-rounded package that could be driven on the street or withstand a severe beating at the track.

This year is HPA's third and most successful entry in etGP. The R32 is owned by Jesse Brimhall of Montana and it was recently overhauled when HPA took it into the workshop and updated it with new Garrett turbos, a DSG transmission swap and a widebody. 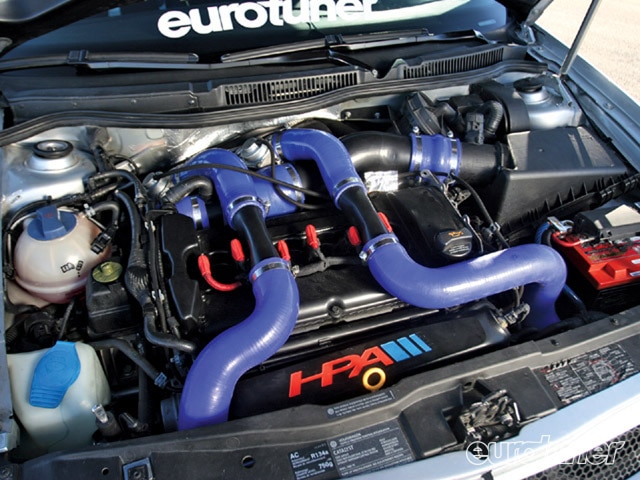 "It's definitely one of a kind," explained Marcel Horn of HPA. "We wanted a balance between daily performance and a weekend track car.

"Every year we drive to the event and this year, Jesse drove the car home to Montana directly after the drag racing had finished."

Fueled by 91-octane pump gas, the R32 finished every event and capitalized on its all-wheel drive advantage on the drag strip.
Contact:
www.hpamotorsports.com
604/598-8520 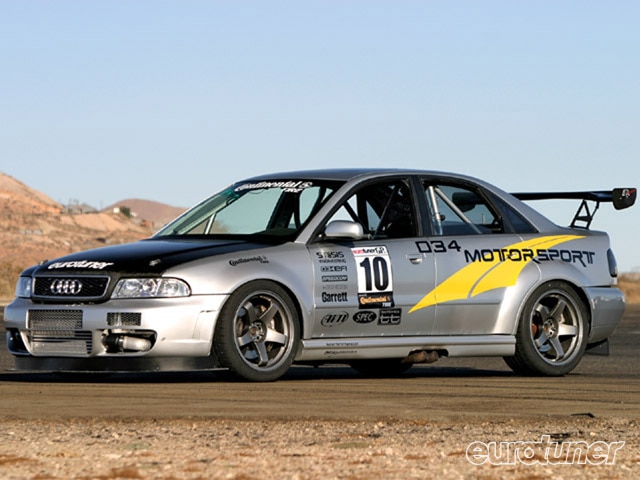 034Motorsport
2001 Audi A4
*Best Dyno
Almost no introduction is needed for 034Motorsport. The tuner is synonymous with Audi and VW tuning, having developed its own performance parts from its Fremont, CA home. They also built the 848hp engine in the Castrol Syntec Top Shop Challenge (et 12/08) and have developed a portfolio of racecars, including this '01 Audi A4. The car debuted last year with hopes of winning etGP, but were beaten by arch rivals from EuroCode Tuning and Stasis Motorsport. Now, with a new VR6 motor using an R32 head, plus RS4 widebody, the car was destined for glory, or was it?

"After losing by such a small margin last year, we wanted to do a clean sweep," Javad Shadzi, president of 034, told us. "We spent four months installing the new engine, widebody, wider tires, everything we wanted to do in the beginning.

"We tested the car on our hometown track at Sears Point and it was running 3-4sec faster than last year. So we expected it to be 2-3sec faster at Streets of Willow," Javad continued. 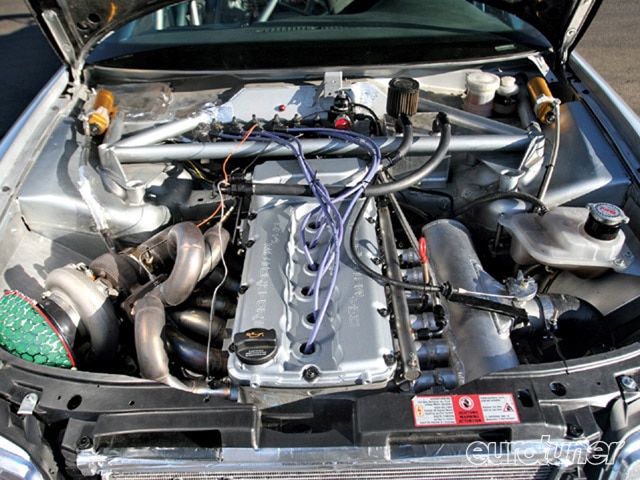 034 embarrassed the entire field on the dyno competition, producing a record-breaking 807.11whp. However, the crankshaft developed a fracture, which worsened on the road course. Despite that, 034 posted a 1:28.662 on its timed lap. Amazingly, this was only 2.5sec slower than last year even though the car had a broken crankshaft, and was enough to secure second place on the road course. But after diagnosing the problem, it was too late to fix the car for the drag strip.

"There was a couple of times we weren't sure if we would make it to the event at all," Javad concluded. "But we pushed through and came up with solutions. So we're happy the car made so much horsepower and did well on the road course considering how it was running."
Contact:
www.034motorsport.com,
510/657-6707

Kinetic Motorsport
2002 VW GTI 337
*Best FWD
Many people were skeptical about whether Kinetic Motorsport's GTI 337 actually made the power claimed in our Street Sleeper feature (et 7/08). After all, 400whp in a daily-driven FWD car is a lot to comprehend. But sure enough, Shawn Van Neer, co-owner of Kinetic, arrived at etGP with the intention of backing up his claims. The car spun the dyno past 550whp twice, on pump gas and without anything breaking or even tuning in between runs. The motor was built for power but unfortunately the tires couldn't find traction on the drag strip or road course.

Despite traction difficulties, the 337 was the fastest FWD car on the road course, although veteran driver TC Kline can be thanked that.

If the car were to run a quarter-mile, Shawn was confident it could run in the mid-12s. "It was a kick in the nuts to be using the eighth-mile," he told us. "It makes the car look stupid because it doesn't show the power until past the first eighth mile. But for a FWD car on street tires, we did the best we could in each event."
Contact:
www.kineticmotorsport.com
604/882-9962

FocusSport
2008 Ford Focus
So you might ask why a Focus was in this year's etGP. Well, the original Focus was designed, engineered and built in Europe, arriving in the US in '99 when Raffi Kazanjian and Euro Sport Accessories created FocusSport.

In '06, FocusSport campaigned a '05 Focus hatch in etGP, finishing in the middle of the pack in all three of the events.

This year, the team brought another Focus from Speed TV's Street Tuner Challenge. The car won the challenge so we were keen to see how it would stack up in etGP, which is all about raw performance.

Equipped with FocusSport's turbo kit, forged pistons and Cosworth rods, the motor ran strong and the car made the most runs of any tuner at the drag strip and road course. Unfortunately, poor traction was its biggest enemy. And it could have probably gone quicker on the road course if it wasn't for the huge stereo in the trunk. Raffi also told us he missed a shift on his fastest lap, losing him valuable time.

Nonetheless, it was interesting to see the Focus in the competition as FocusSport is one of the few Ford tuners to understand the car's European roots.
Contact:
www.focussport.com
714/630-1555

Bahn Brenner Motorsports
1983 VW GTI
After a two-year absence, Bahn Brenner Motorsports returned to etGP with an old school flavor. Known for its superchargers, BBM brought an '83 Rabbit owned and driven by Ty Smyth. It was equipped with a 2.0 ABA 16v and Garrett GT28 turbo. The bottom end was built with Eagle H-Beam rods and Ross Racing pistons.

Owner of BBM, John Betz, designed the 2.0T setup, built the head and fabricated custom exhaust and intake manifolds for improved airflow because the company is now dipping into the turbo market with products for the Mk1, Mk2 and Mk3.

Although the Rabbit finished down the ranks, BBM was ecstatic to survive the event. They'd never finished etGP when competing with their previous Corrado project car. "We weren't trying to break any records. We just wanted to get through it and have fun, so I'm really pleased," John told us.

We should also note BBM was the only tuner on ContiSportContact 2 tires, since the newer CSC3s weren't available in sizes for the Mk1.
Contact:
www.bahnbrenner.com
541/388-1202

2006 VW GTI
Despite tremendous enthusiasm, bad luck seems to plague WRD. They brought the same Mk5 GTI from last year's competition, which was the fastest VW on the road course. This year they were on pace to beat the FWD field when adversity struck.

Just days before etGP, WRD had installed APR's latest stage 3 turbo upgrade but it appears there was an undiagnosed problem and John Gardner from WRD noticed one of the cylinders was misfiring. This came to light in a poor dyno performance and despite a good showing on the road course, a cylinder eventually blew in the over-worked motor. Despite the adversity, WRD promise to be back for the Super Lap Finals with a stronger motor.

We also have to acknowledge the improvement the team had made to the car overall. In the past, it had been rather hurriedly prepared, but this year the GTI was looking sharp and prepared for battle. Luck can be a cruel mitress.
Contact:
www.wrdusa.com
916/781-3876

Groma Race Fabrications
1989 BMW 325i
*BEST Rwd
When a new challenger enters etGP, they typically finish at the back of the field or breakdown halfway through the event. They usually don't understand the strain the car will endure during three days of battle. However, Groma from Irwindale, CA was able to win the RWD class on its first attempt in its '89 BMW 325i.

Having transplanted a 4.4 liter V8 from a 540i into the two-door, they also fitted a Rotrex supercharger and prepped the car for track duties with custom coilovers, a rollcage, racing seats and a six-speed manual.

President of Groma, Ed Haroutonian, was overjoyed with the car's performance at etGP. "We were very happy with the results. The car's a daily driver and something we built to be crazy."

Despite its wild spec, the 325i proved reliable, finishing second on both the dyno and drag strip. This was the car's second competitive event and Ed admitted it performed much better thanks to Split Second software and the addition of methanol injection.
Contact:
www.gromafab.com
818/402-3008

Madness Motorworks
2008 BMW 135i
*Best Road Course
George Mehallik formed Mini-Madness almost eight years ago and recently decided to branch out into other brands with the introduction of Madness Motorworks. The flagship vehicle for the new company was this brand new '08 BMW 135i. It showed up with only 850 miles on the odometer and minimal testing, so the team was skeptical about how it would perform.

"We put the car together in two weeks, cranking on it day and night," George explained. "We didn't know if the clutch would work out and didn't have any experience with the brake pads, but the car performed flawless."

George plans to continue developing the car with parts that will be available through his online store. Many of the parts should also carry over to the 335i.Contact:
www.madnessmotorworks.com
503/466-6463 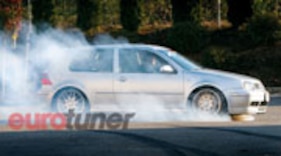 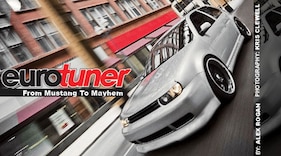 Having Previously Owned Ford's Musclecar, Marcus Pino Was Keen To Make Amends. And Although He Didn't Intend To Take Things This Far, He Ended Up Building An Incredible 2002 Volkswagen 337-Edition GTI - Eurotuner Magazine