Don’t get us wrong – we can appreciate driving in the rain, especially when that operation involves flinging a car sideways at speed around cones and along barriers. It’s a gnarly proposition to say the least. But rain also takes out some of the visual impact of drifting, negating smoke and forcing drivers to tiptoe through the course (rather than outright attack) – which is what fans got for a second straight round in Formula D New Jersey at Wall Stadium. 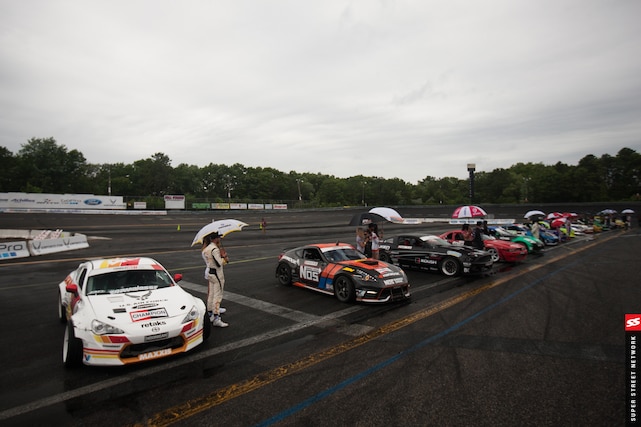 Precipitation followed the championship from Round 3, which was staged a few weeks back in Florida at the Orlando Speed World oval. Round 4 was the series’ second of four rings, but Wall has the distinction of offering the steepest banks of the lot, some 33 degrees of incline on either end of the track. 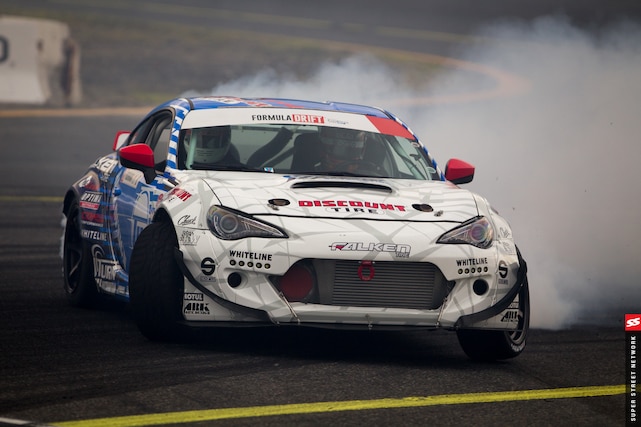 Drivers initiate into the banked turn on the west end of the oval that’s the circuit’s first rear clipping zone, and then come off the big bank flicking the car in the other direction to slide past inner clip one. From there it’s another flick into rear zone two, then another flick past front clip two, and one final flick into rear zone three before crossing the finish. Friday qualifying was tough – so tough competitors needed at least a relatively high score of 78 (out of 100) to make it into Top 32 tandem eliminations. There was no shortage of thrilling runs (even the hapless Joon Maeng got in a full pull in the Lucas Oil Mav TV BMW Z4!) but when all was said and done Ken Gushi in the Scion Racing Greddy FR-S grabbed the number-one spot, repeating what he did in Orlando. 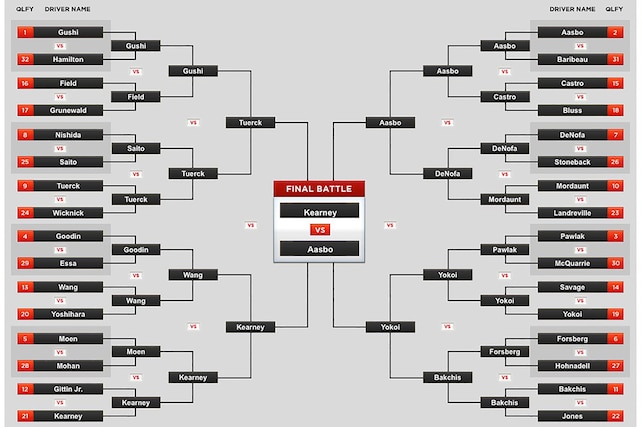 On Saturday, tandems were rescheduled about an hour earlier in anticipation of rains that were moving into the area. The track was still dry at this point, and drivers were going hard – so hard cars were rubbin’ fenders on more than one occasion. As Formula D commentator and cofounder Ryan Sage put it, Top 32 is no joke anymore. 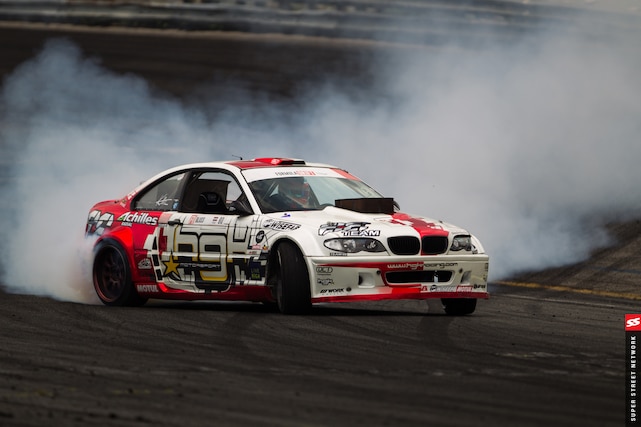 Then came the round of 16 and of course Mother Nature had to spoil the fun somewhat. As expected cars were skating out there, and when it did begin to dry out the bank dried much faster than the infield, which made for an interesting spectacle (tire smoke on the bank, dramatically reduced speeds on the infield). Seven of the eight battles in Top 16 saw at least one car spin out, and half of the Great 8 field was made up of drivers who had experience in the wet. 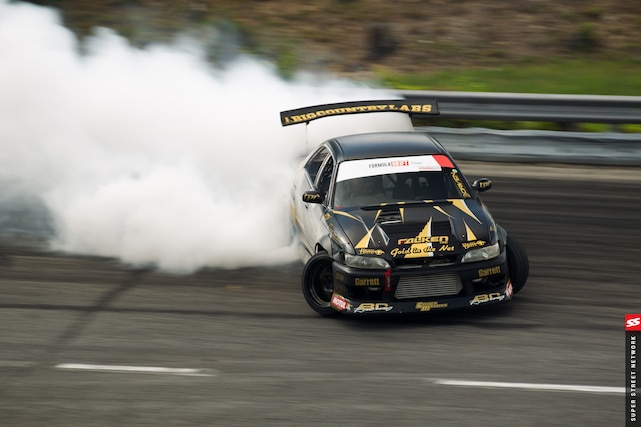 In Great 8, Ryan Tuerck in the Retaks Maxxis FR-S benefitted from a couple minor errors Gushi made in his lead lap to advance. Forrest Wang’s day in the Get Nuts Lab Nissan Silvia came to an end after bumping into Dean Kearney’s Oracle Lighting Achilles Dodge Viper, while DeNofa’s sloppy chase in the BC Racing 3-Series allowed Fredric Aasbo in his Rockstar Energy Hankook tC to get by. Finally, in a repeat of a match in Orlando, Masashi Yokoi in the D-MAX S15 and Odi Bakchis in the Feal Suspension ARK S14 faced off, which ended in a tie and Yokoi went on to win the One-More-Time tiebreaker after Odi was judged to be too far off the clips. 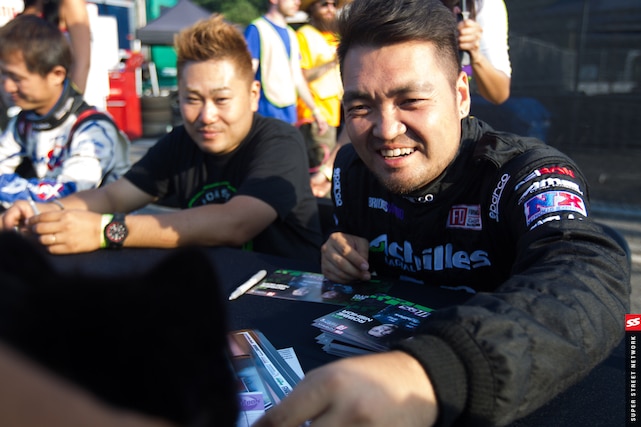 The rain started up again for the Final 4, where Kearney dispatched Tuerck, and then Aasbo got a little payback for his early elimination from Round 3, ending Yokoi’s day with a superior chase. Round 4 ended with Aasbo toppling Kearney after the chasing Viper had a slight lapse in drift past the first inner clip. 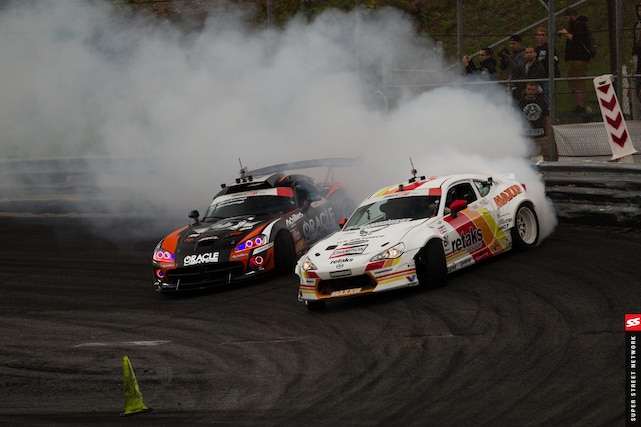 This is Aasbo’s second victory of the 2015 campaign (he also won the Long Beach, Calif. season opener) and puts him back in the title hunt, somewhat poetically at the place where he earned his first career Formula D win in 2014. Kearney took silver and Tuerck bronze for being the higher qualifier among the losers in the semifinal (P9 vs. Yokoi’s P19). The top three on the points table are now separated by just seven markers, with Tuerck replacing Bakchis in the lead by only a single point. Aasbo is in third as the championship gets over the hump, with only three rounds left of the 2015 Pro series. Next is Round 5 at Evergreen Speedway in Monroe, Wash. on July 24 and 25. 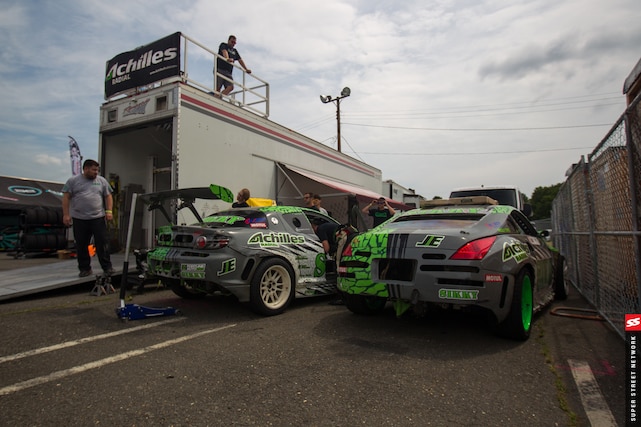 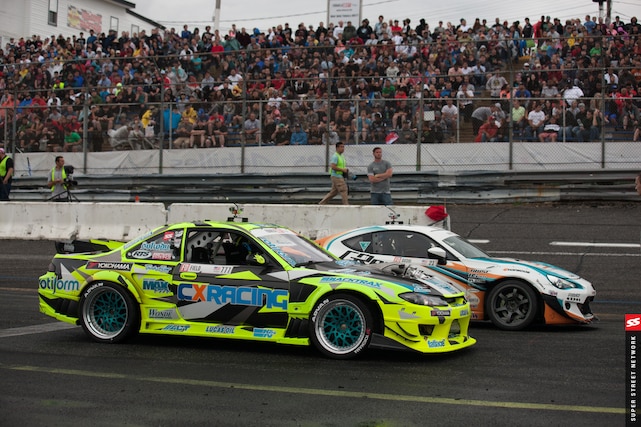 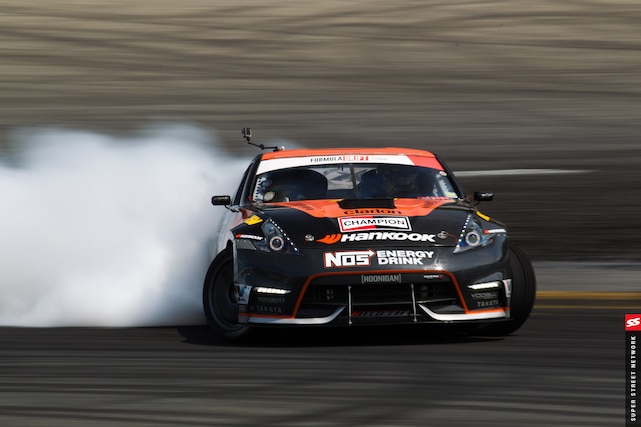 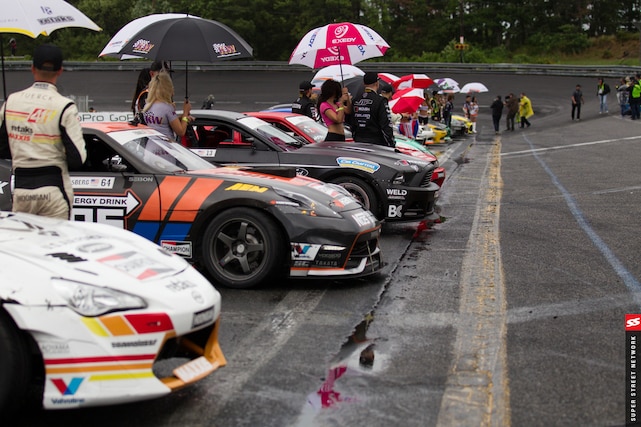 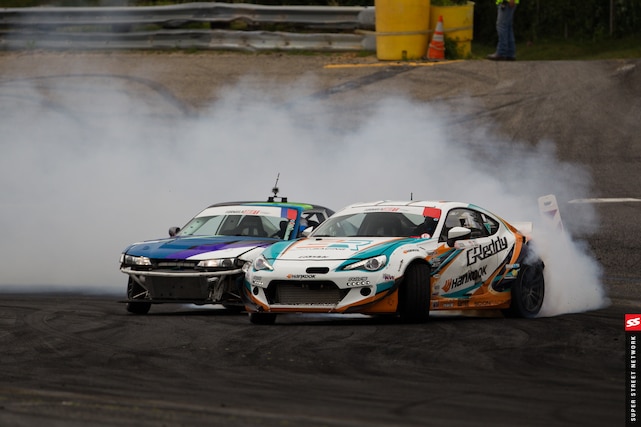