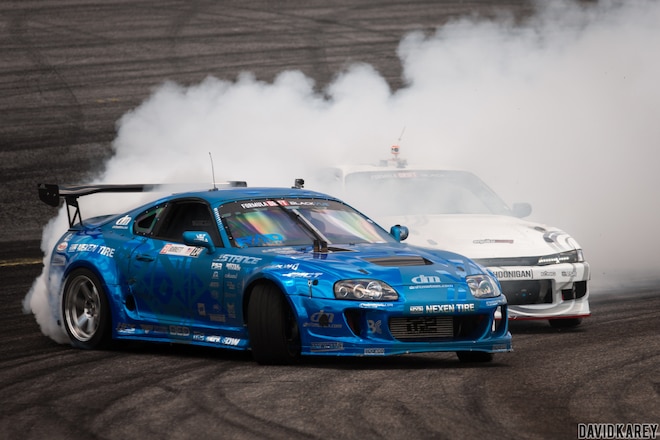 Formula DRIFT’s Pro 2 championship redeemed itself somewhat on the Orlando Speed World oval last weekend after a wobbly start to the season at Road Atlanta in May. Competition was noticeably fiercer in the Pro championship’s licensing series – perhaps because of the relative confinement of running in a bowl – and when the smoke and dust finally settled it was an ex-Pro, Marc Landreville in the Perry Performance Nissan S14 240SX, who not only won the whole thing, but did so in fairly convincing fashion. 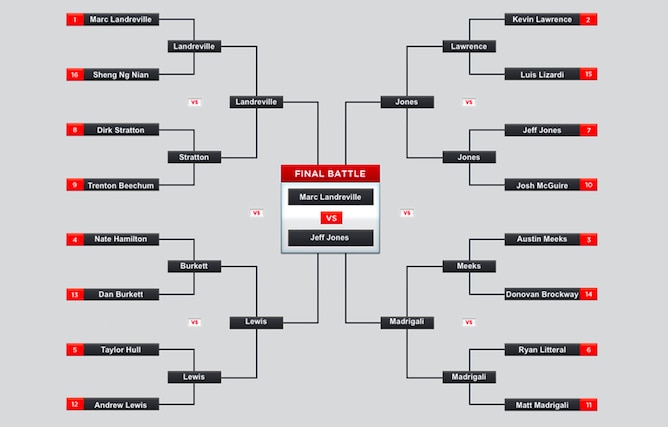 In the brutal heat and humidity of central Florida, Canadian Landreville was tops in qualifying on Thursday, scoring a 91 on his best lap, the only competitor to break into the 90s. Joining him at the top of the order were Kevin Lawrence in the Enjuku Racing S14.3, rookie Austin Meeks in the Committed Service Brands S14.5, former pro Nate Hamilton in another Enjuku Racing S13.4, and Taylor Hull in the Asphalt Anarchy 240SX, Hamilton and Hull both scoring 83s. 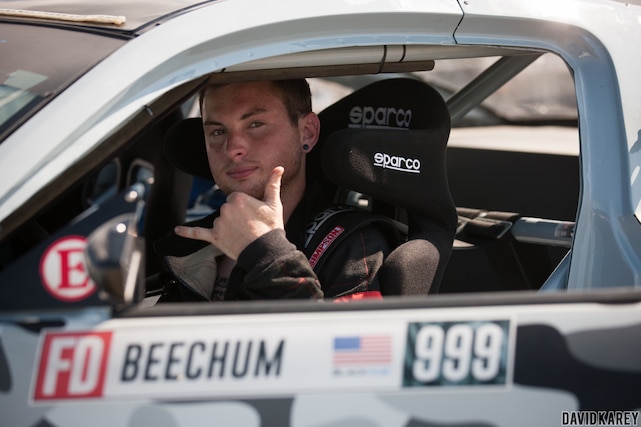 Unfortunately Hull couldn’t make the start line in his Top 16 pairing against eventual semifinalist Andrew Lewis’s S13 due to wrecking before the big show and not being able to repair his car in time. Hamilton also wouldn’t make it out of the first round of eliminations after his tire de-beaded in the first lap against our buddy RAD Dan Burkett in the RAD Industries Toyota Supra Mark IV (the Pros also had tire unseating issues aplenty in Orlando). Formula D rules apparently stipulate that if a tire de-beads in between passes there’s no going to your pit to change tires, and as a competitor you effectively have to forfeit the match, which is what Hamilton had to do. 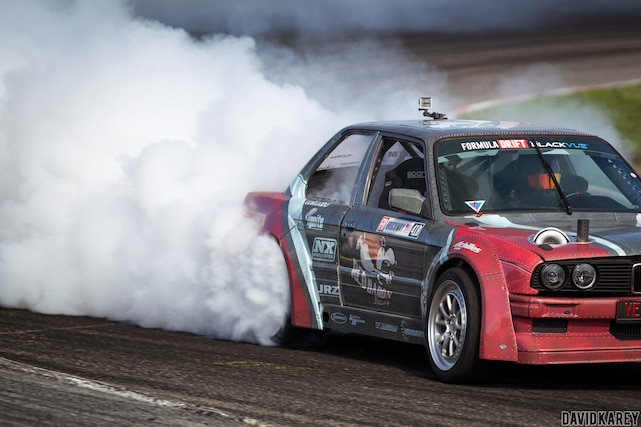 For his part, Landreville made quick work of Sheng Ng Nian’s JZX100 Chaser in Top 16. Of the other two to make the Final 4, Round 1 winner Jeff Jones in the DOC S14 had an amazing battle against Josh McGuire in the JMR 240 in some of the closest tandem action we’ve ever seen in Pro 2, with the decision going to Jones, and Matt Madrigali in his S13 got past Ryan Litteral’s S14 after Litteral straightened out in the power alley going past the course’s second inner clipping point, a big enough gaffe to give the match to Madrigali. 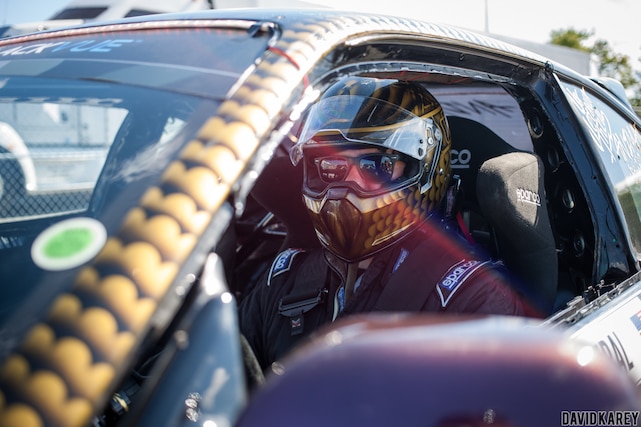 In the round of 8, Landreville eliminated Dirk Stratton in the Stratton Racing Chevy C6 Corvette, Stratton appearing to correct his line a lot in his chase lap. Burkett spun out leading Lewis through the power alley, giving the win to Lewis, while Lawrence and Jones battled to a One-More-Time (OMT) tiebreaker; the tandem ended when Lawrence got up into the wall on his lead run and damaged his car badly enough that he couldn’t return to action. Meeks and Madrigali were the last of the Great 8, with Madrigali edging out Meeks for the W. 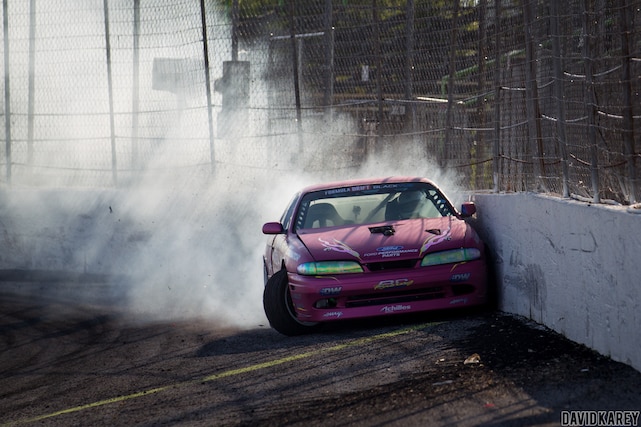 In the semis, Landreville had two near-perfect drives against Lewis, punching his ticket to the finale. On the other side of the bracket Jones and Madrigali had less-than-ideal laps but Jones made fewer corrections, earning entry into the last fight. As consolation, Madrigali wound up taking third place for qualifying higher than Lewis, 11th versus 12th respectively. 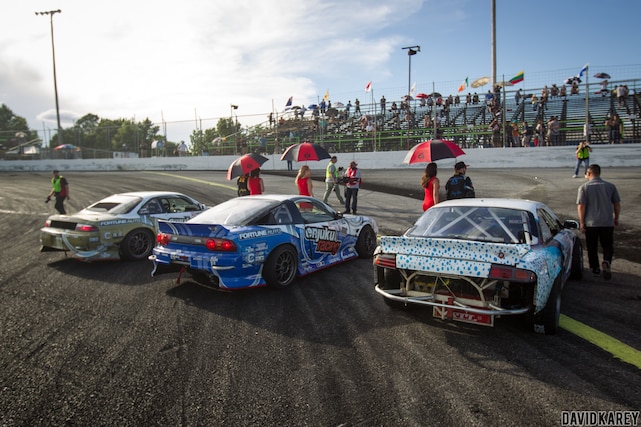 The final was a repeat of the battle that ended Round 1, although this time both vehicles were healthy enough to slug it out. And slug it out they did, with Landreville proving beyond a shadow of a doubt he’s one of the best in Pro 2, impressing with a solid lead lap and even better chase, tucking up into Jones’ door for more than half of the orbit. This time instead of silver Landreville took gold, leaving second place to Jones. 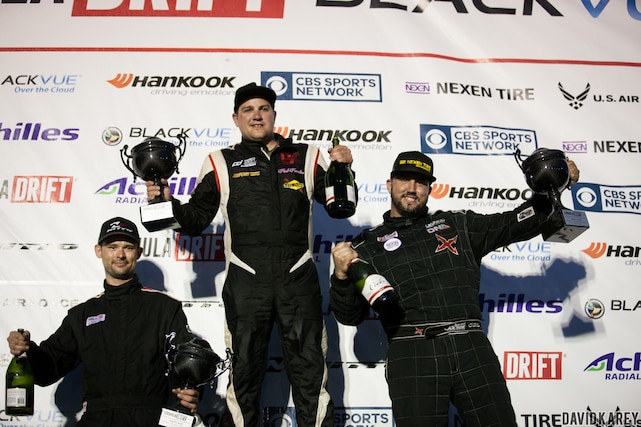 Landreville takes a slim lead in the point standings as the Pro 2 series goes on a three-month hiatus, with 192 markers to Jones’s 187 and Lewis and Burkett behind Jones with 105 points apiece. The next round is set for September 8th and 9th at Texas Motor Speedway in Fort Worth with the Pro championship. If you can’t make it out to Texas, catch all the thrills on the Formula D Livestream. 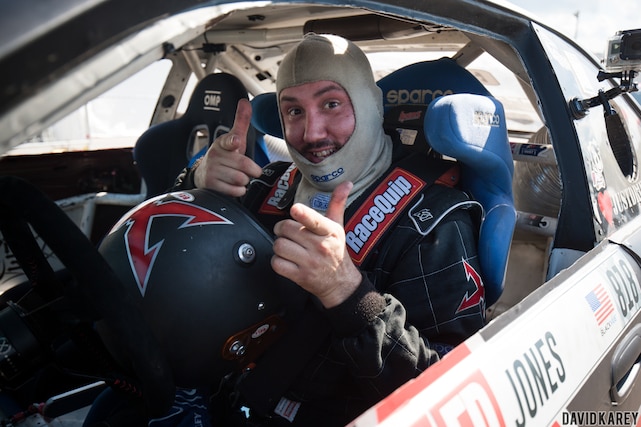 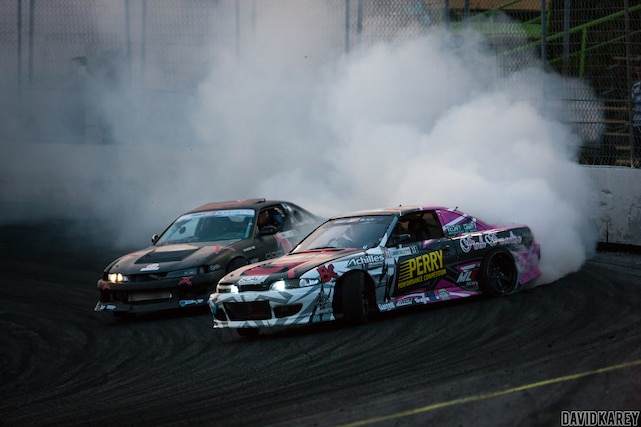