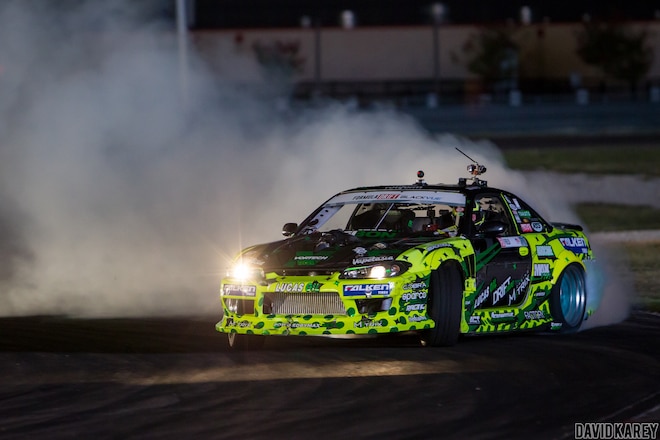 It warms our hearts every time Formula DRIFT shuts down the haters. The latest vindication comes from Round 7 at Texas Motor Speedway, the penultimate event of the 2016 season, where the tandem action was so evenly spread, competitors so equally matched, cars so ridiculously close to one another, we wouldn’t blame you if you were watching and literally on the edge of your seat for the entire contest. Ok, so yeah, it’s still a drag race – FD cars are powerful and fast, we get it – but with the judges encouraging chase drivers to take the gloves off and be aggressive, we saw a lot of wheelmen take the urging to heart and put the noses of their cars right up in other guys’ business. 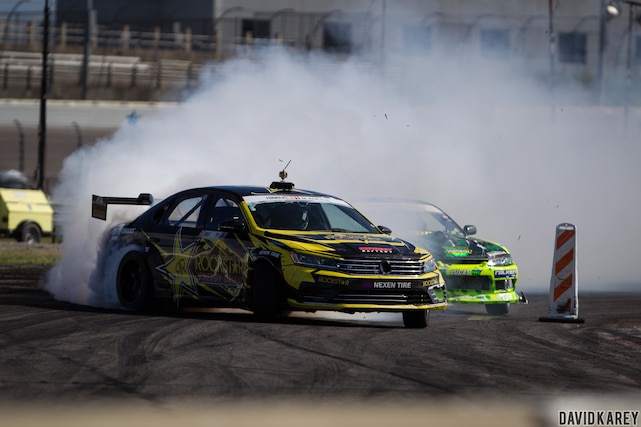 So-called “chase craft” is on the rise and we couldn’t be happier. But while car proximities seem to be tighter than they’ve ever been, and more drivers are sharing the spotlight, it’s still veterans of the series – and in particular, vets who’ve mastered consistency – who are ending up on podiums and atop the standings. Case in point: the four pilots leading the standings before Texas – ’09 and ’14 champion Chris Forsberg in the NOS Energy Nissan 370Z, reigning champ Fredric Aasbo in the Rockstar Energy Scion tC, 2010 champ Vaughn Gittin, Jr. in the Monster Energy Ford Mustang, and Odi Bakchis in the ARK Performance Hyundai Genesis Coupe – came out of the event in the same spots, only with different point tallies. 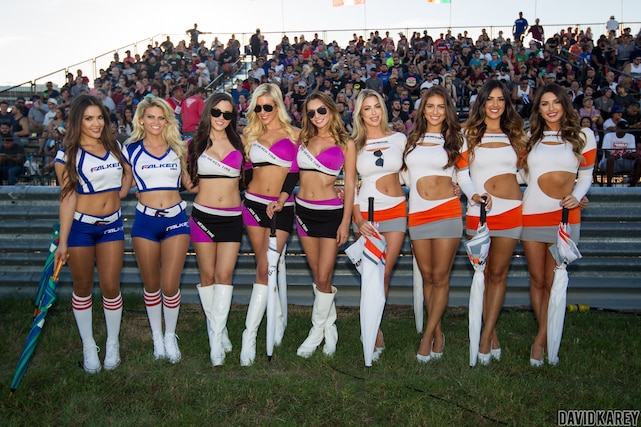 Which isn’t to suggest they haven’t been challenged, because they have. Gittin, who was number-one qualifier again at Texas Motor Speedway, his fourth this season, fell again in the second stage of eliminations, Top 16, like he did at Round 3: Orlando and Round 6: Seattle. Nothing can be taken for granted in FD anymore, not even early eliminators being a breeze. 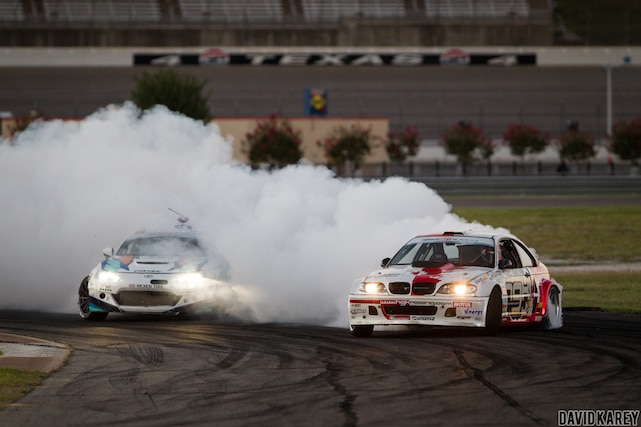 JR fell to the guy who would eventually win the whole thing, Matt Field in the Falken Driftcave S14. It is the understatement of the year to say Field was on fire in Texas; he was unrelenting, hitting his marks in front and mirroring foes from behind. In Top 32, Field’s first victim was twice champ and now journeyman driver Tanner Foust in the V8 RWD Rockstar Passat, a match that first went to a One-More-Time (OMT) tiebreaker before a decision was made. Then against Gittin, Field looked almost overwhelming, JR doing all he could to keep up in the course’s midsection before swapping ends heading into outer zone 3 (almost the same spot where he had balled up his Mustang a year earlier). Forrest Wang in the Get Nuts Lab S15 had similar troubles with Field in the round of eight, unable to keep pace from the chase spot. 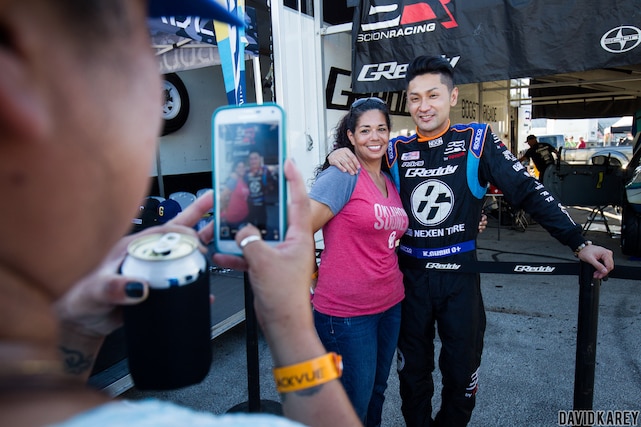 Field drew Kristaps Bluss in the HGK Motorsport E46 M3 for the semifinal, who first made quick work of Jeff Jones and the DOC S14 in Top 32. After Jones, Bluss faced Ken Gushi in the Greddy Performance FR-S, another pairing to go to OMT; in the extra laps the Latvian proved impossible to reel in and Bluss advanced to Top 8. There it was previous event winner Bakchis and another OMT; with Odi in the lead proximity looked good, but when it was Kristaps’ turn he sacrificed a bit of angle in zone 2 in order to get away from his opponent. Judges awarded Bluss the win. 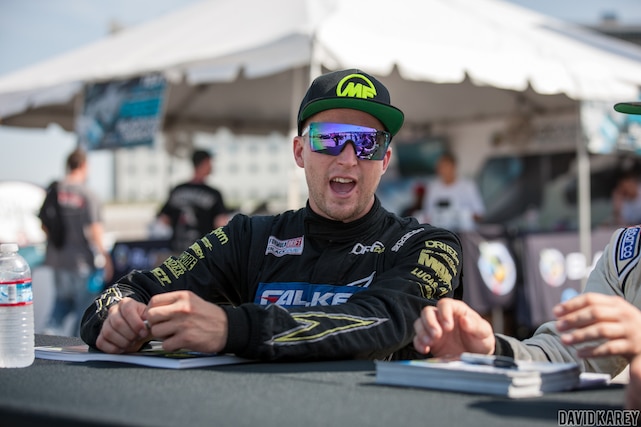 On the other side of the bracket, Alec Hohnadell in the Enjuku Racing S14 and Forsberg clawed their way to the final four. Hohnadell first dispatched Charles Ng in the Sogun Infiniti G37 Coupe, and then in Top 16 sparred with Ryan Tuerck in the Gumout FR-S, a battle that saw Tuerck shut down his car in the course’s chute after something possibly broke. Something definitely broke on Mad Mike Whiddett’s Red Bull Mazda MX-5, taking him out of contention after his round-of-16 duel with Tyler McQuarrie’s Mobil 1 Chevrolet Camaro; that gave Hohnadell a bye into the semis. 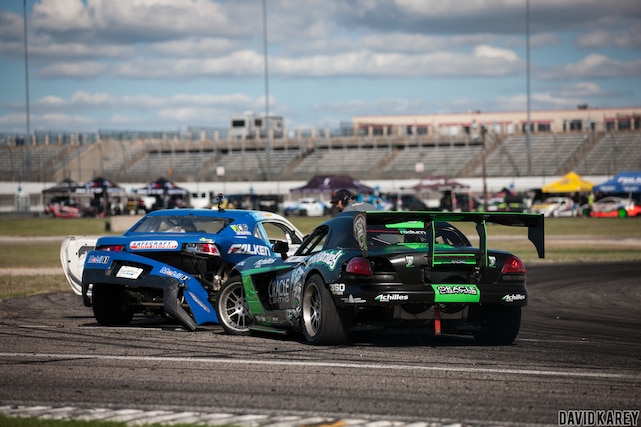 For his part, Forsberg got to the Top 4 by first taking out Pat Mordaunt in the Drift Paddock 350Z in Top 32, who had the slightest of gaffes in the chase position but that’s all it took in an otherwise perfect pair of orbits. In Top 16, Forsberg and Justin Pawlak in the Roush Performance Mustang drove to a OMT, where Forsberg in chase mode lost drift momentarily at clipping point 2 but Pawlak had an even bigger strike against him a lap earlier when his car shut off when the fuel pump cut out. Forsberg then squared off against Aasbo, another doozy that went to OMT; Aasbo on the chase did himself in when he got lost in the Z’s tire smoke and made a huge mistake (opposite drift) at clip 2. 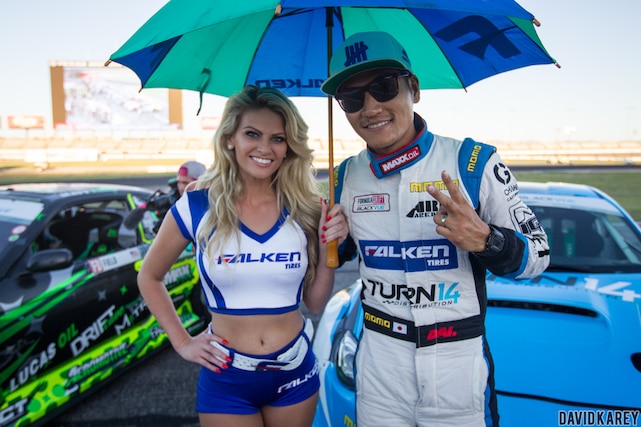 The semifinal pitted Field against Bluss, Forsberg against Hohnadell. The Field/Bluss match was actually pretty easy to score as Bluss, probably a little too aggro, went four wheels off alongside the midsection of the track and Field needed just to not get a zero in order to advance, which he did. That left Forsberg and Hohnadell, the Enjuku Racing hot-shoe doing something similar to what Bluss did, shooting off the course at clip 2, and getting a zero score for it. It wasn’t a complete loss, though, as Hohnadell qualified higher than Bluss and therefore picked up third place. 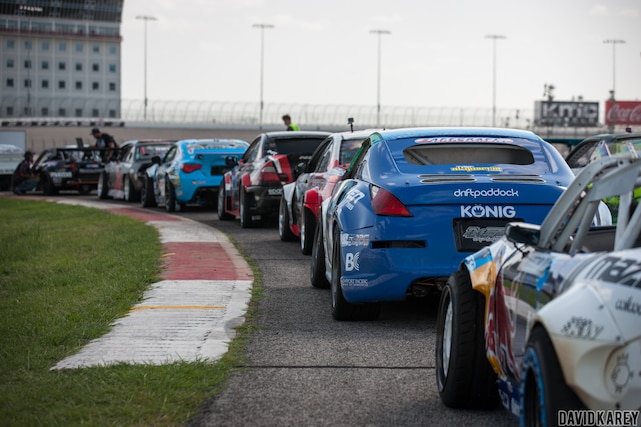 By this point in the evening, the crowd was super pumped, and there wasn’t an empty seat in the house. They were rewarded for sticking it out, as Forsberg and Field’s first lap (with Forsberg in the lead) was nothing short of brilliant. They swapped positions and in a dramatic turn Forsberg ended up colliding with Field’s 240SX in between zone 1 and clip 1, causing the Z to spin but seemingly not fazing Field in the least. He finished out the course, and after judges took a hard look at the replay to make sure Field was not at fault, they awarded him with the victory, his first as a Formula DRIFT Pro. 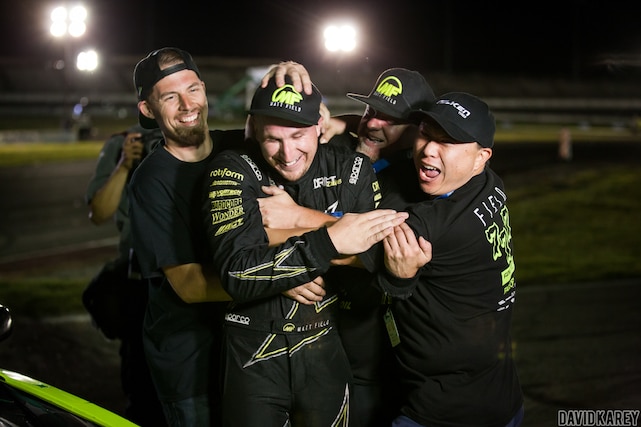 Forsberg may have been the real winner, though; as the second-place finisher, he notched his sixth straight podium finish of the 2016 season, securing third at Rounds 2 and 3 and second at Rounds 4 through 7. It’s this consistency that has landed him at the top of the standings with 503 points, and with just one event left this year he’s the odds-on favorite to pick up his third championship. 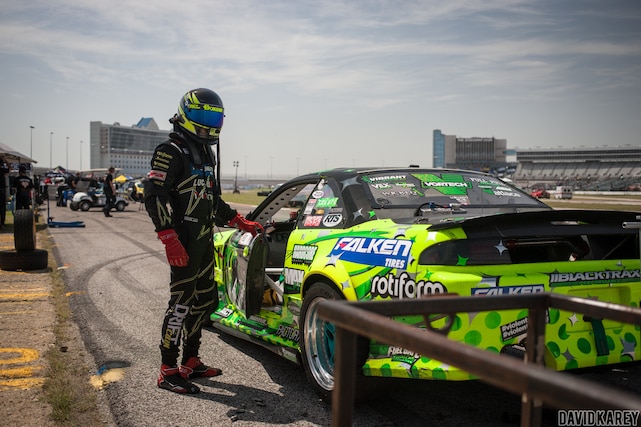 Forsberg is the favorite, but not a shoo-in. With 107 markers remaining on the table, mathematically there are still four drivers in contention heading into the House of Drift season finale, namely the quartet we mentioned at the beginning of this story. At 467, Aasbo trails Forsberg by 36, while Gittin is 60 behind at 443 points and Bakchis is 86 behind at 417 points. Some drifting talking heads might think this is all over, but we like to think anything can happen.

The Formula DRIFT 2016 ender is all set for October 7 and 8 at the legendary Irwindale Events Center. If you can’t be there in person to watch history unfold, make sure to catch all the action on the Livestream – it’s going to be epic. 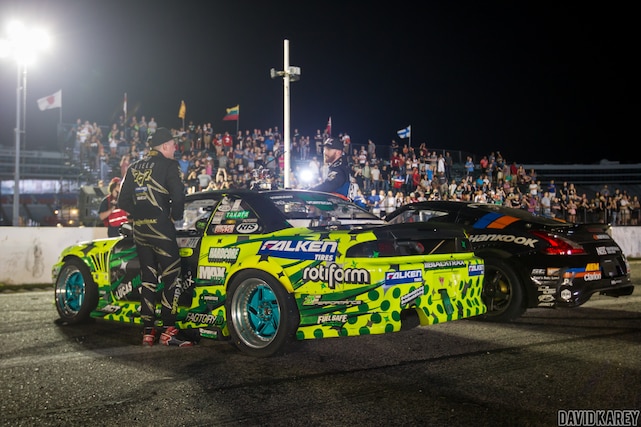 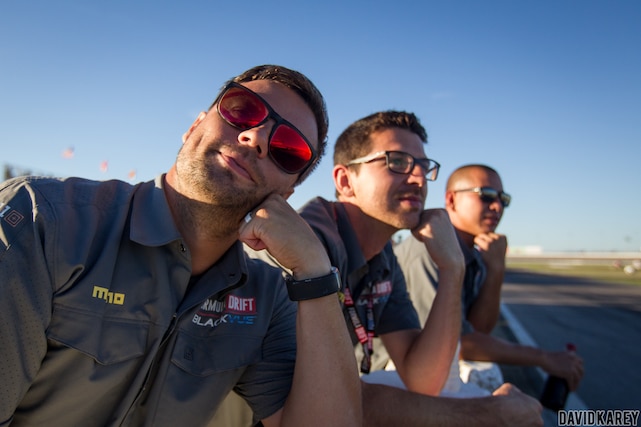 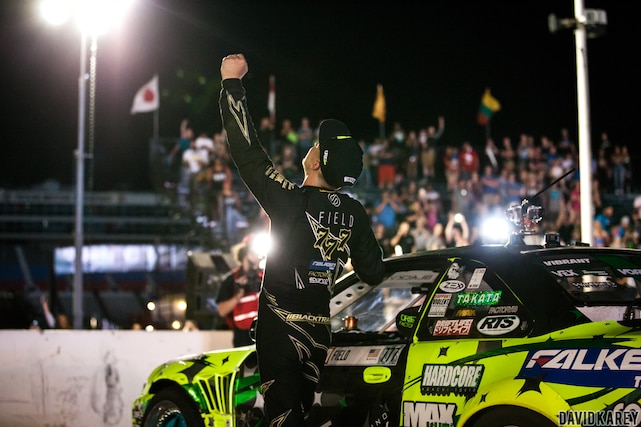 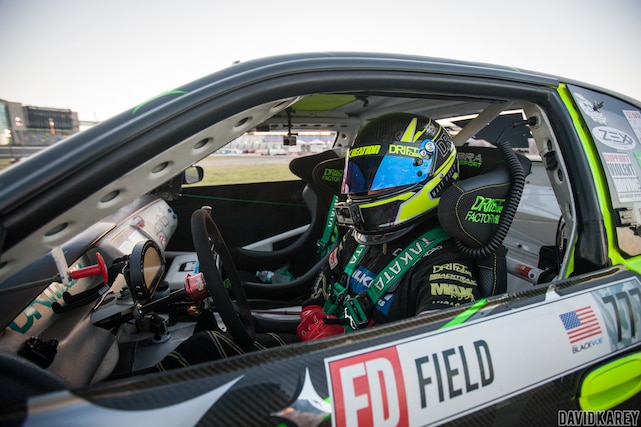