What Goes On In Soichiro's Name 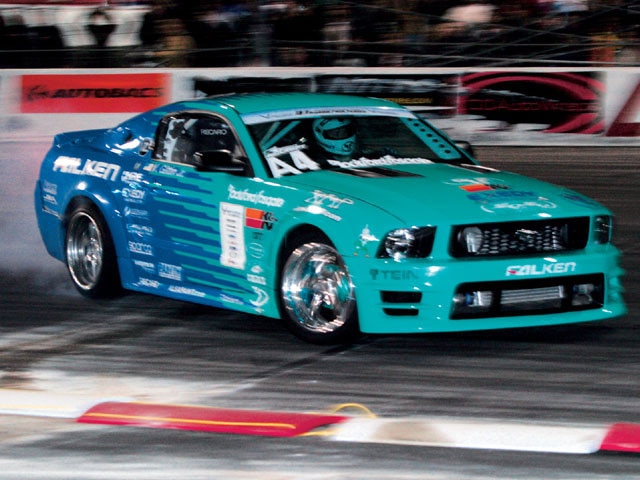 The best drifters Japan has to offer handed a D1 win to an American driver in an American car. Keep your eyes out for rips in the space-time continuum.

Irwindale Speedway hosted the 2005 D1 Grand Prix USA vs Japan All Star Exhibition on December 17th 2005. It was a D1 competition that raised eyebrows and made more than a few people scratch their heads. For the first time in drifting history, an American driver beat out the Japanese competition for the overall win. Worse yet, it was in an American car.

Vaughn Gittin Jr. piloted his Falken tires 2005 Mustang GT past Yasuyuki Kazama (2005 series champ) and Nobushige Kumakubo (2004 US vs. Japan champ) to an unprecedented victory that will not soon be forgotten

New faces on the track included rally legend Rod Millen, whose drifting veteran son Rhys crashed in practice, forcing him to retire from the contest. There were a few other promising new US drivers out there who lead us to believe that next year will be all about progression, and that the Japanese drifting monopoly may soon fall.

The H-badge was represented by Alex Pfeiffer in the RSR S2000 and Stephan Papadakis in his AEM S2K. Steph crashed in the first round of qualifying during his best performance off the drag strip to date. The crash took a major toll on the car's bodywork, ripping off the driver side front suspension and forcing Steph to step down from what would have been his first time qualifying for a D1 competition. Pfeiffer qualified in the top 16, but lost in the first round of eliminations after a valiant effort against Youichi Imamura who was taken down in the next round by Gitten, the day's winner.

Both Alex and Steph have new setups in the works to give us Honda heads a gleam of hope for the marque's future in professional drifting. Keep a close eye on the two F-powered, rear drive monsters in upcoming D1 competitions. They've made it clear that they intend to be a force to be reckoned with.

Honda Tuning
Tough Club x Prime NYC Present Nissan Night 2020
If you’re an enthusiast on the east coast and get word that a gathering like that of Tough Club x Prime NYC’s Nissan Night is on the calendar, regardless of how many miles away it is, there’s a good chance you’re going to make it. For years, long before the mysterious virus that’s inadvertently stopped
Danny Choy – Dec 17, 2020