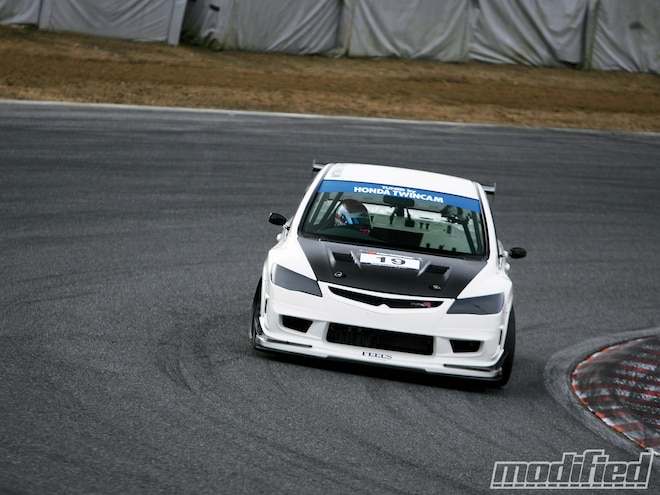 Site: Tsukuba Circuit / Tsukuba, Japan For any true gearhead out there, December in Japan means only one thing: Super Lap Battle. This is the last event of the year, and as they say, the best things are kept for last. Rev Speed has been organizing this event for 20 years now, inviting the fastest cars in Japan to Tsukuba to see who laps the tiny Japanese circuit in the fastest possible time. It's been amazing to see the times come down over the years; back in the day, getting a sub-1-minute time was a milestone at the time, but these days everyone is trying to dip below the 55-second barrier-a perfect example of not only how cars are getting better but just how good the tuning industry has become at extracting the last bit of performance from demo cars.

Super Lap is not only about power-anyone can build an extreme engine-it has more to do with fine-tuning, getting that perfect balance between grip, power and weight to push a car to its limits. Super Lap is innovation at its best, and we're happy to see that the tuners have started to shift their interest to the new wave of JDM sports cars. There's no doubt the EVO X takes the top spot, with the all-new 4B11 proving to respond rather well to modifications-most shops are running well above the 500hp mark.

HKS made a rather interesting decision and instead of showing up with its dedicated EVO X time attack machine, the CZ200S, brought its new EVO X MR demo car based on the SST dual-clutch-equipped model. It was disappointing because everyone wanted to see if the CZ200S could get into the 57-second bracket, but it was also equally exciting because it means HKS is taking an interest in further developing the SST EVO X.

The biggest surprise of the event was the new Koyama Racing Labo EVO X (featured on page 44) built in collaboration with the guys at Team Orange. Koyama-san, the ex-chief engineer at JUN has set up his new tuning shop and this first creation really proved itself by setting the second fastest lap time for an EVO X behind the Varis demo car (cover story, page 32). The new-gen Impreza isn't achieving the same kind of results as the EVO X, but there were a few shops that still brought them, something that couldn't be said for the new Nissan GT-R. Strangely enough, nobody showed up with a R35, which got people very confused at the event. Maybe tuners aren't quite ready to show what their R35s can really do, and we know shops like Mine's are putting the finishing touches to new upgrades like its complete engine kit.

One car that has been receiving a lot of attention from the media recently is the Revolution RX-7. This, next to the HKS CT230R that still holds the record at Tsukuba, is one of the most extreme time attack projects to ever come out of Japan; it's built more like a Super GT race car than a modified street car. The Revolution team has been frantically trying to get the best out of this car since its debut at last year's event, and this year managed to bring the best lap time down to 55.915 seconds, a slight improvement over last year's 56.094-second time.

The RX-7 sports a tubular front and rear frame and an all-carbon widened body, not to mention a Hewland sequential transmission sourced from Super GT cars, so there's still a lot of potential there, something that only more testing will unleash. Like last year, Revolution finished second overall, right behind the car that over the last few years has been unbeatable, the infamous Cyber EVO. With Tarzan Yamada at the wheel, the new-and-improved EVO IX beat last year's 55.261-second time with a 54.925-second run-inching closer to Taniguchi's incredible 53.589-second lap he posted with the HKS CT230-R in 2007.

Tarzan Yamada was also the driver of the third-position car (56.667-second lap time), the Tomei/Cusco Impreza, which after winning the '08 Super Lap Battle series in the U.S., has returned to Japan to take on its highly competitive JDM rivals. After chatting with the guys at Tomei, we discovered the Impreza was still set up to run the close-to-slick tires it was running in the U.S., but wasn't getting the desired amount of traction around the cold Tsukuba circuit, with Tarzan struggling to keep the car in line when powering out of corners.

In the Open-4WD class, Varis is now the builder of the fastest EVO X around Tsukuba. The company's white CZ4A, which graces our cover this month, is the first road-registered car to go under the 58-second barrier with a time of 57.963 seconds, just behind Pro Shop Screen and its FD3S RX-7. The other fast EVO X, from Koyama Racing Labo, managed a 58.368-second lap, landing in seventh position. Koyama's car looks like one of the most highly tuned CZ4A out there with an incredible engine bay sporting an aluminum billet intake plenum and a carbon airbox.

5Zigen was back from the U.S. with its CL7 Honda Accord Euro-R, which after competing in the Super Lap Battle stateside, came to Tsukuba with a series of new modifications that include a 420hp turbocharged engine. The car wasn't able to get under the 1-minute mark, but there's still a lot of work needed to get it to perform to its full potential.

After the Z34 debuted at Tsukuba last year, with both MCR and Mine's showing off their brand-new demo cars, the new 370Z has really come a long way in the JDM tuning scene, with cars like the Prostock Motor Sports demo car lapping in 1:03.048 seconds with Nobuteru Taniguchi at the wheel. Euro cars are always growing in popularity at these events and this year Swift showed up with a Ferrari F360 Modena, which turned out to be the fastest NA car in the Open class. That spot is usually taken by the mighty ASM S2000. ASM decided to leave the extreme widebody demo car at home this year and instead participated with its other AP1, but were unable to brake the 1-minute barrier. Hot on the tail of the Ferrari was the Outer Plus Lotus Exige with an excellent time of 59.712 seconds, a time achieved due to extreme weight reduction thanks to a fully custom dry carbon body and doors.

The 2010 season will no doubt bring even more time attack craziness as tuners push the limits of their cars to achieve that all-important lap time. More SLB events are set to be held in the course of the year at tracks like Fuji and the brand-new Sodegaura Forest Raceway, so we should get our fix without having to wait until next December.