Fall NHRA Sport Compact Nationals - We Are All Made Of Stars 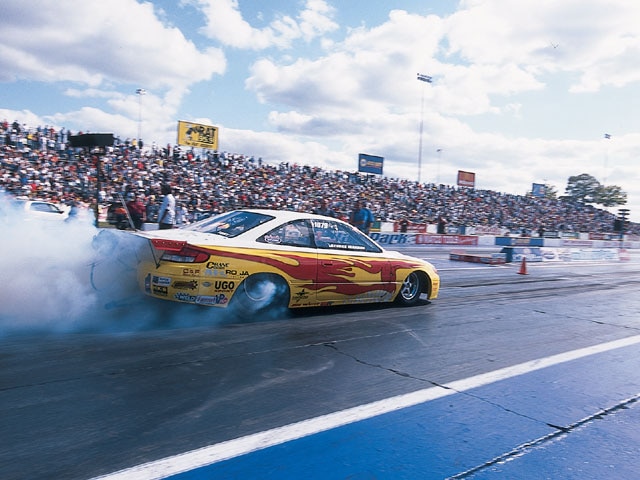 It should come as no surprise to you that Englishtown came through once again with yet another highly successful fall race event, hosted this time by our good friends at the NHRA. We're not sure why, but it seems like this track will be forever plagued by good fortune, unbeatable track food, and really crabby security guards. Some of the country's top racers were on hand to knock down world records while others improved their own personal bests. This race is definitely one of the stories you'll talk about with your friends for the next couple of weeks, then you'll forget about it when a new episode of Dismissed airs on MTV.

Pro V8 ClassWith the only Pro V8 car in attendance for the weekend, Matt Scranton took total control of the situation by besting his 202.55mph run back in May with an even faster speed of 203.68mph on a 6.97 pass. As if that weren't enough damage already, Matt continued on his rampage with a 6.89 run at 202.24mph during his final round solo. Both of these feats have been noted as two new NHRA national records. Speaking of records, whoever can guess the amount of records in Jonny's collection will win...absolutely nothing. Maybe a sticker in a color that you don't want, but don't push your luck.

Pro ClassYou want more records? Well, good-Jonny does, too! In fact, the Pro Class saw its share of fast times when Ara Arslanian pulled off the first official 6-second pass in NHRA's import drag racing history during Saturday's qualifying sessions. In addition, Bullish teammate George Ioannou drove his Solara to a 6-second pass as well, qualifying with a 6.96 at 195.96mph, as well as setting a new national speed record. The two would later go head-to-head for the final round of competition, but due to a few mechanical problems, Ara inched his way to the finish line as his teammate stole the easy win with an 11.66 pass.

Modified ClassPerhaps one of the more exciting classes to watch for in this series was the Modified Class. Early on, Cesar Febus took the Number One spot as he set a new record with a 7.68 pass, just barely squeezing by Matt Hartford, who qualified second with his 7.79 run. Hartford would later drop a 7.66 pass at 179.97mph during the first round of finals, thus resetting the national record. However, Febus backed up his 7.67 with a 7.70, snuffing Hartford for the e.t. record, but not the speed record. Stephan Papadakis, who had only qualified Fifth, lucked out against Vinny Ten, who was disqualified because he crossed the centerline as he made his way down the track. As Steph later lined up against Febus, he took the easy road to the finals as Febus shut down with an oil leak. During the final round, Steph took a loss against Hartford, as the AEM Drag Civic broke down after burning out. This 8.85 victory is a plus for Hartford, as it keeps him within the points leaders as well giving him a third straight win.

Hot Rod ClassAll hell broke loose as Bruce Mortensen unleashed his fury against Jojo Callos, taking the lead in qualifying with an 8.65 pass, the first 8.6 pass in the class' history, which he also backed up during the semi-finals with an 8.72 in the Venom Civic. Kenny Tran also ran an ultra fast 8.62, but lost against Mortensen in the final round when Bruce set a new speed record with an 8.87 at 168.11mph. Perhaps the fastest pass in the Hot Rod Class came from Lance Ho Lung, who drove the HP Racing Civic to a mind blowing 8.59 pass in the opening round. Before that, they had run a personal best of 8.72 during qualifying. This was the first time the Hot Rod Class had seen any passes that were faster than 8.72-this time we not only saw its first 8.6-second pass, but also its first 8.5-second one. Simply amazing!

Street Tire ClassAbsent from this race was Mark Mazurowski, but eager to take his place in the spotlight was Paul Efantis, who, in his Supra, took his sixth win in the Street Tire Class this year. Paul qualified First with a 9.86 ahead of Jeff Hill and John Shepherd, both champions from previous years. He would later go against Shepherd during the finals, but with a red light at the tree, Efantis walked away effortlessly with a 9.59 pass.

All Motor ClassThe All Motor Class belonged to Scott Mohler this time as the class' strongest driver, Jesus Padilla, was nowhere to be seen. Mohler secured a Number One spot with a 10.63, just a little over Norris Prayoonto's 10.78. In the end, Mohler would take a 1-second lead with a 10.62 over Ken Scheepers, who could only muster an 11.24.