Get Rich Or Dai Trying. 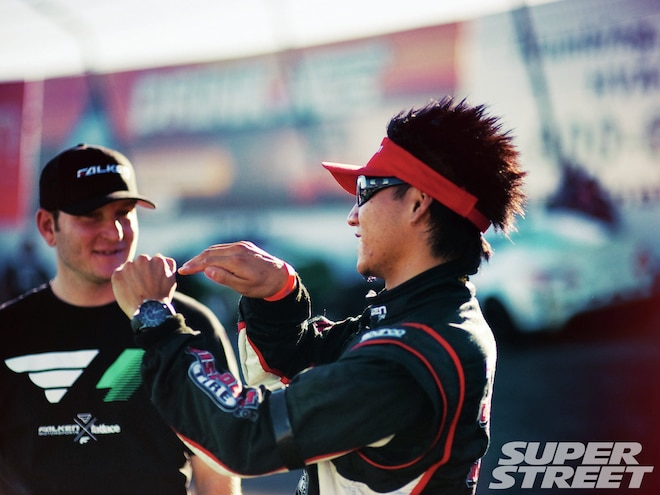 There’s something about the House of Drift that is extra special. You can’t quite put your finger on it, but anyone that has witnessed a drift event at Irwindale knows what I’m talking about. There’s a vibe in the air that brings every last ounce out of the competitors, much the same way I’d imagine a baseball player would feel at Fenway Park. It’s this inexplicable phenomenon, in addition to Irwindale marking the final stop of the Formula D tour, which ensures an action-packed event every year. 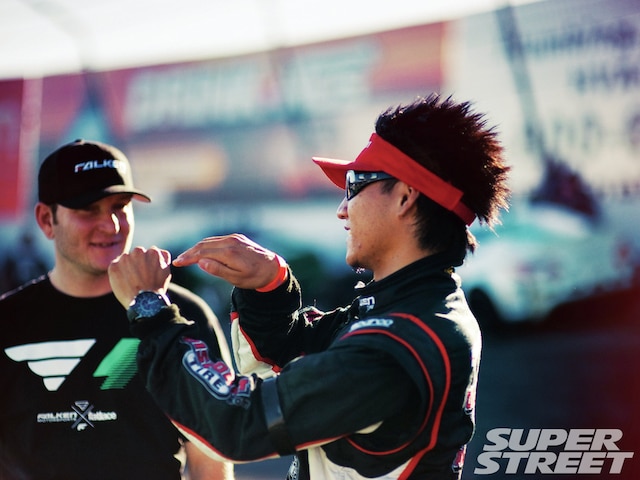 For the newcomers I can only imagine the intensity and intimidation this track brings. With its super-high speeds and tricky transitions is takes a lot of balls, from both man and machine, to do well here. As a result car-totaling wrecks are never out of the question, and the Pro-Am contest leading up to the big event has become a fan-favorite for some guaranteed carnage. In a way, this is the amateur’s induction into drifting manhood; if you can drift and survive here, you can drift anywhere.

Thanks to the long break between round 6 in Las Vegas and round 7 at Irwindale the teams have some much needed time to repair, test and invent new components. Over the years, Irwindale has been the guinea pig event for many new creations from bash-bars to 3D television coverage, the House of Drift has watched the sport evolve first hand. This year would be no different as Formula D introduced new light-up clipping points to assist the judges in determining how well the guys were doing around the new course.

Oh, did we forget to mention that the infamous layout was altered for 2011? If Irwindale wasn’t already fast enough, the new course requires even more momentum from the drivers to complete the newly elongated final turn. While most of the track remains the same, the final corner has been extended to roughly three-times its original size with additional clipping points added. For drivers this means more room for error, for me it meant more places to shoot from—an exciting change either way.

In the past, Irwindale has had a strange tendency to put luck on the side of the little guy and many drivers got some of their first podiums, and even wins, at this track. This is the only track I can think of that can cause a seasoned veteran to make uncharacteristic mistakes leaving the door open for up-and-comers to take over. Unfortunately, that well and truly wasn’t the case this year, with big-name drivers dominating from the top 16 on. The question on everyone’s mind, who was going to be season champ?

Coming into round 7, Dai Yoshihara was in a fairly comfortable lead nearly 19 points ahead of Justin Pawlak, with Darren McNamara, Chris Forsberg and Matt Powers all numerically capable of winning. Dai and JTP were both looking pretty hungry for their first title, but as we’ve seen so many times at Irwindale, anything could happen. Ironically, anything did happen and neither Yoshihara or Pawlak advanced past the top 16, meaning they would finish the season on the sidelines hoping their points standings would hold up.

This meant that only two drivers had a shot at eclipsing Dai and those drivers were Chris Forsberg and D-Mac. Although the 370Z and Sky were looking amazing all weekend, when the pressure was turned up neither driver

was able to advance out of the final four and instead they would face each other in the consolation round. The drivers that knocked them out, Rhys Millen and Tyler McQuarrie, would go on to battle for the win which eventually went to McQuarrie and his Falken Tires 350Z vert.

Although it wasn’t the podium-topping finish we’re sure he would have wanted, Dai Yoshihara was indeed the man of hour taking home not only the 2011 Championship title but also the Tires.com Triple Crown. We couldn’t have picked a nicer guy to bring home the glory, and we’ve gotta’ admit it feels good to see a 240SX back on top! Congratulations Dai! Don’t forget to catch the action in 3D on DIRECTV and we’ll see all you guys at the tracks again next year!