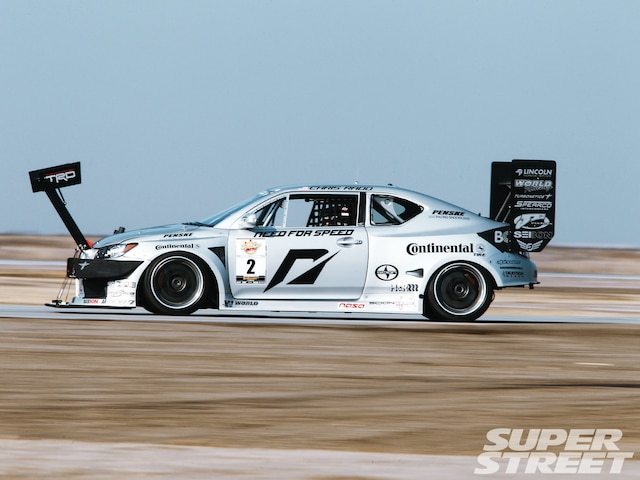 With every passing year it seems the gap between SEMA and the Super Lap Battle (SLB) finals on the following Wednesday get closer and closer. Just when you think you can relax (and detox), you find yourself driving into the middle of the desert where filthy hotels, crappy food and fast cars await. When the sun comes up in the distance, race fuel stench fills the air and the sound of engines firing to life surround you—it’s suddenly all worth it.

If you’ve somehow managed to live under a rock and never heard of Super Lap Battle before, I’ll break it down in a nutshell. It’s America’s original time attack series, time attack being a fastest-lap timed competition running modified street cars—not full-on sanctioned racers. The right combination of car, tuning and driver are what wins here and although budget is at play, and often times the class winners aren’t the best funded but rather the most clever and skilled.

In years gone by, the SLB finals have played host to some of the most impressive, not to mention quick, time attack cars in the world. Seeing cars and tempers pushed to the limit has become expected, but this year had a unique feel. To choose one word to describe this year’s event it would be relaxed. As the industry and time attack scene have evolved much of the shit talking and heated rivalries have been replaced by good-vibes and camaraderie. Everyone is working towards the same goal—going as fast as possible.

I showed up the day before SLB to watch practice and test my own daily driver (which you can read about in the Spring 2012 issue of Project Car). I could tell watching cars like the FXMD NSX smash around my EG with the greatest of ease that there would be records getting broken the next day. When Wednesday morning finally rolled around, the weather forecast was perfect, and when combined with relatively traffic free run groups, this was the ideal recipe for fast lap times. 2011 was going to be the stage for a very interesting shift in the time attack movement.

Since the inception of Super Lap in 2004, an Unlimited AWD car has always held the overall record at Buttonwillow. In an interesting change of pace, there were only two UAWD cars on hand this year to back up the record but the boys from FX Motorsports Development have been putting in serious work developing their NSX and they were the favorite for the overall win—but would they break the previous record of 1:41.046 set by Sierra Sierra and become the first ever RWD record-holder?

During testing and practice the team looked to be on pace for a record setting day but ran into a few hiccups along the way. But FX wasn’t the only team with their sights set on a new record. After a disappointing 2010 season, Chris Rado and his World Racing team ditched the AWD project and brought out their new Unlimited FF 2011 Scion tC monster with the goal of knocking down their own best, and current class record of 1:49.703. Not only were the guys able to beat that time, they smashed it into oblivion by over 2 seconds with a new record of 1:47.394! Unless these guys come back with an even crazier tC I don’t think this time will ever be beaten.

Sportcar Motion’s Loi Song and driver Tim Kuo were back to recapture the Limited FF flag they lost to FXMD last year. Their previous best time was set with Tim behind the wheel of a K-series EG back in 2008, which was the last time SCM and Tim went to battle in this class. For 2011, the boys brought out a newly-improved Integra Type R (which competed in our first FF Battle), which up to this point had never been driven in competition by Tim. After one session it was clear that the pair were working beautifully together and by the end of the day Sportcar Motion laid down a very impressive 1:54.789, good enough for the win and a new record.

Rounding out a hat trick of new record times in FF classes was Clint Boisdeau who manhandled the Apollo Performance Ford Focus. With a several 2-minute flat lap times, he ended the day with a sensational 1:59.086 becoming the first-ever Street FF to break the 2-minute mark as well as the new record holder. Unfortunately, the day wouldn’t be so kind to the other Street classes.

The guys from Evasive deserve a round of applause after a long day spent cleaning mud from the complicated underbody of the Voltex’d out Evasive S2000 after an oil leak caused them to spin off to the infield. Luckily the car and driver Rob Walker made it out unharmed but practice would be cut short. They painstakingly cleaned every last inch of the car and even cleared the grooves in the tires to make it back in time to shoot for their own record of 1:56.762 set in 2009. They walked away from the event as the Street FR champions but the victory would be bittersweet as they failed to improve their previous time.

In the Limited AWD class, things looked lively as Evasive Motorsport’s Mike Chang would chase the 1:48.550 time of JC Meynet with Ryan Gates also in tow for a piece of the action. After successfully bringing the car up to temps, Gates pulled into the hot pits for his signature one-man-Chinese-fire-drill-tire-pressure-check and headed off for a hot lap. However, as fate would have it Ryan missed a shift and over-revved his engine, a disappointing early end to what could have been a very good day. The Evasive Evo, or what I like to call “the best-looking time attack car in America”, would end up taking first place but once again just shy of a new record.

The most exciting battle of the day happened in the closely contested Limited FR class where the stage was set for a duel between two BMWs. In one corner, were the guys from Plattforme AG with their awe-inspiring LSB M3 (as seen in our March 2011 issue) this time piloted by Japan’s time attack specialist Eiji “Tarzan” Yamada. In the other corner, were the Berk Technologies boys with their 135 and a professional driver of their own, Carl Rydquist. The sparring match finally ended with Berk taking the win with a record setting 1:53.221, the Plattforme car just two-tenths behind.

But, of course, what everyone really wants to know is whether or not the overall record was broken. It was a long day for the guys at FX and although they didn’t have any direct competition so to speak, man and machine proved to be a worthy opponent on their own. Limbs were separated on both the car in the form of a shock absorber, and driver Tyler McQuarrie who suffered a dislocated shoulder in the teething stages. Despite these set backs, the team soldiered onward to what would be the defining moment of their collective efforts in time attack. A new record would be set with a blistering lap at 1:40.981 knocking down Sierra Sierra and ending the AWD record regime.