There's an old saying, "Choose a job you love, and you'll never have to work a day in your life." I had that in the back of mind this week when Sam Du and I headed out to Irwindale Speedway -- also known as the "House of Drift" -- to check out Scion Racing's test day. Scion drivers Fredric Aasbo and Ken Gushi brought out their fresh new tC and FR-S rides they'll be getting sideways in the 2013 Formula Drift season, which gets underway this weekend, April 12-13 in Long Beach. After a few solo/tandem laps, many of us had a chance to go out for a ride along. And what a ride it was.

I hopped into Gushi's Greddy FR-S and as you can imagine, it was sensory overload -- especially for me as it was my first time riding shotgun with a drifter of such high caliber. Thankfully, Scion had provided ear plugs to protect my ears from the car's not so legal exhaust roar. Aside from this year's livery change, we're told the new Greddy Scion has had some engine work done and horsepower has been increased. As the drift began, I started to think, "Hang on. The wall is right there. We aren't slowing down? Keep calm Jofel and don't piss on these Takata seats."

After jumping out of the car (thankfully without making a mess of the Takata bucket) I can say from experience that the saying's true, I love my job. Note to self: No matter how good Seoul Sausage's food is, don't eat before a ride along. 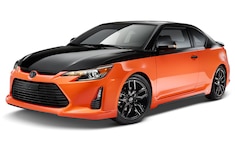