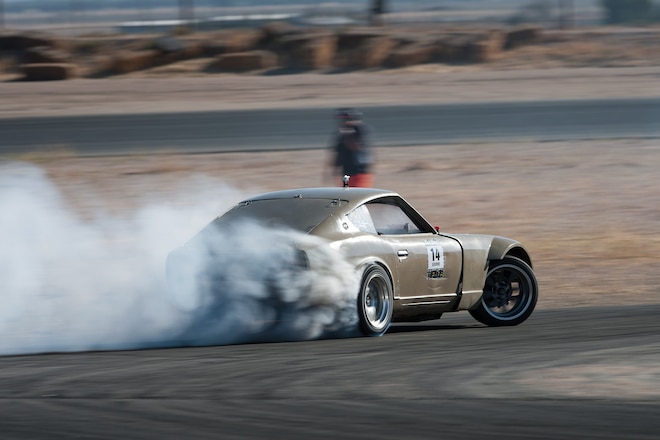 Sometimes we get so caught up in covering SoCal weekend events that we forget that 99.9 percent of you in the rest of the world either can’t make it out here for each one or have other things to do on the weekends. So with that in mind, I’m going to take a slightly different approach to our coverage of Top Drift’s third-round event and loosely paraphrase what went through my head while covering it, minus of course all the thoughts about lighting, aperture, composition, etc. This should be fun.

2:01 p.m.
But at least it’s not as hot as it was for Top Drift’s Round 1 and Round 2, held at Willow Springs’ Balcony and Horse Thief Mile tracks, and at least this round is held in the late afternoon and at night. As I’m sure the drivers sweating it out in race suits and gutted drift cars would agree.

2:02 p.m. Crap. Nighttime at Willow Springs = terrible lighting. Oh well. Better double up during Golden Hour (view our gallery at the bottom of this article for more of that). 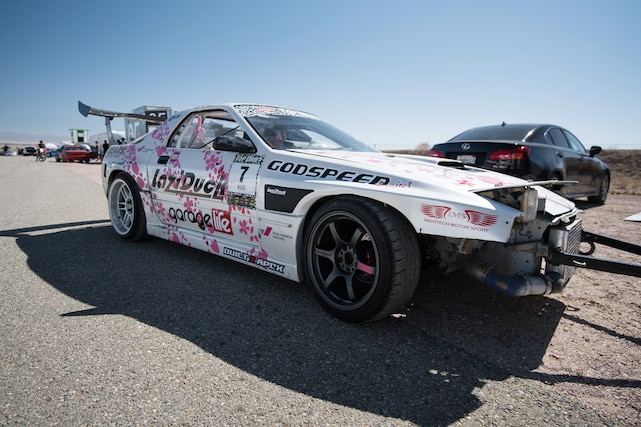 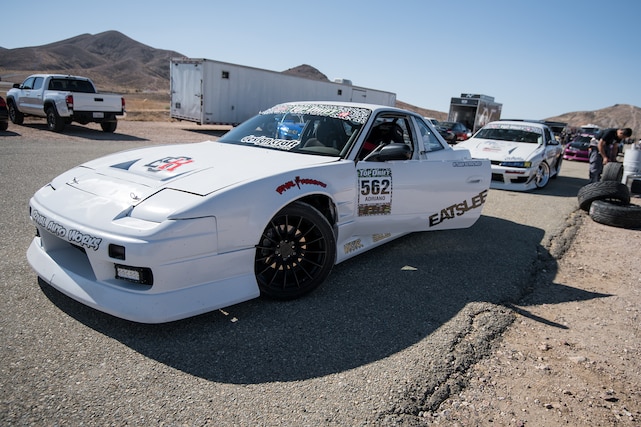 2:15 p.m.
(Walking the pit area) There are fewer competitors than in the first two rounds. Top Drift’s four-event season is easier for budget-limited competitors, but limits the rebound possibilities of those who get off to a rough start. By now, only the most serious and/or dedicated competitors remain.

3:00 p.m.
There are suspiciously fewer tire logos on cars this year. Rumors of the major companies tightening their partnership budgets seem to be true, as even some of the strongest competitors are running smaller-brand tires, scrubs, or just switching to higher-UTQG radials for longer life and lower cost at the expense of grip and smoke. Lots of fans are taking notice, too. This isn’t good for anyone … except maybe Zestino Tire — I’m seeing their sticker on several cars. 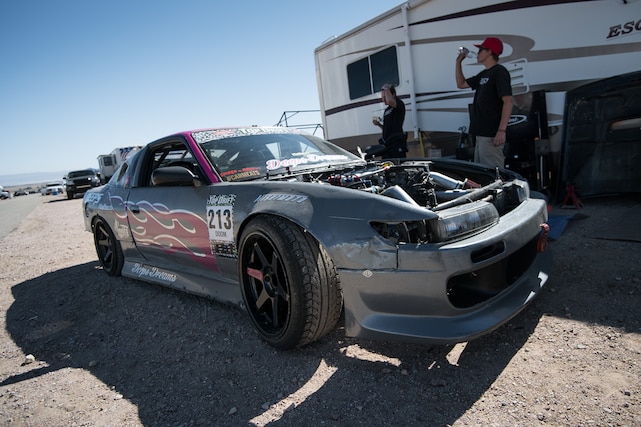 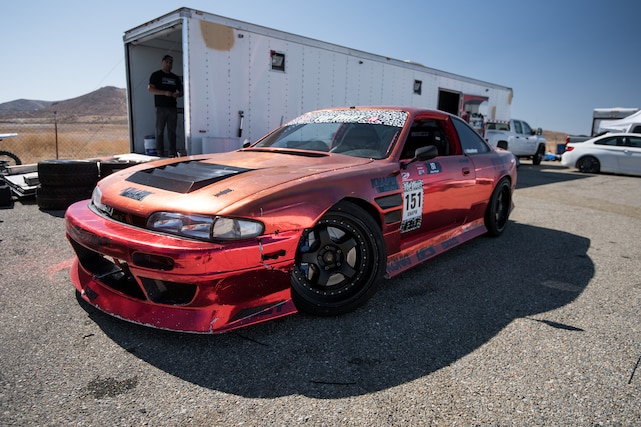 3:30 p.m.
(Practice sessions) Willow Springs’ Walt James Stadium is a demanding track. It’s a 3/8-mile, high-banked oval with really no “stadium,” aside from some wooden bleachers. Its dirt runoffs in any direction are forgiving, but its two big banks require lots of power to complete and together with its rough pavement, it’s a genuine tire-killer. Most guys are saving their tires and skipping practice (again, not good), but the ones who are getting some seat time are looking strong.

5:00 p.m.
(Driver’s meeting) Top Drift is a collaborative effort among several big names in professional drifting (most notably Taka Aono and Hiro Sumida), who before each competition round give some tips to drivers, identify some strengths or improvement points in some of their driving, and explain what they and third judge and Top Drift grad Trent Beechum will be looking for in competition. 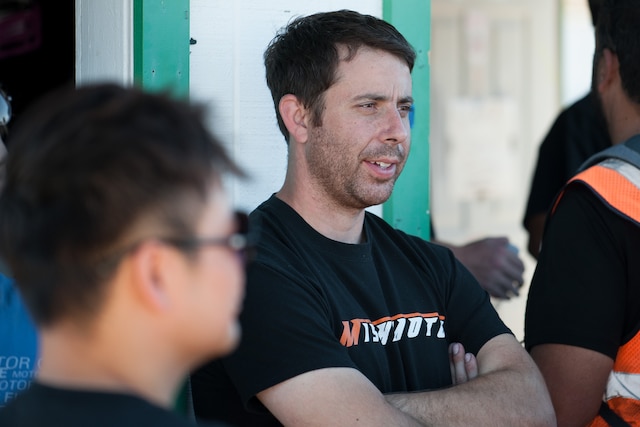 6:30 p.m.
(Qualifying) Qualifying is always painfully slow for fans and drivers alike, as each driver takes two solo runs around the course and everyone else basically waits in the sun, yours truly included (but at least I get to test out shooting locations for the big show). By our count, 38 drivers ran in Qualifying; 16 made it to tandem competition.

7:30 p.m.
In sharp contrast to last round’s many runoffs, breaks, and miscellaneous mechanical failures that delayed Top 16 by an oh-crap-we-might-run-out-of-sunlight amount, Qualifying finished early this time around due to drivers keeping it together and running clean. I was impressed! And thankful for the time to stock up on water … 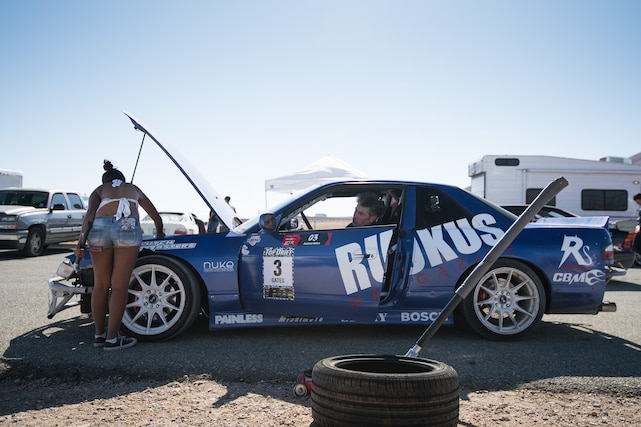 8:00 p.m.
(Top 16) Making the cut for competition were (among other competitors): Andy Hately in the no. 98 e30 BMW M3, Micah Diaz in the no. 08 e36 BMW M3, Brian Nimmo in the no. 555 Toyota Tacoma, Shawn Illingworth in the no. 808 Nissan 350Z, Alex Grimm in the no. 14 Datsun 240Z, and about a dozen competitors in every imaginable variation of S13/S14 240SX with turbocharged, supercharged, or N/A four-, six-, or eight-cylinder engines. The diversity of Top Drift’s field of competitors is awesome, and provides endless challenges to competitors having to battle in/against vehicles with so many unique characteristics. 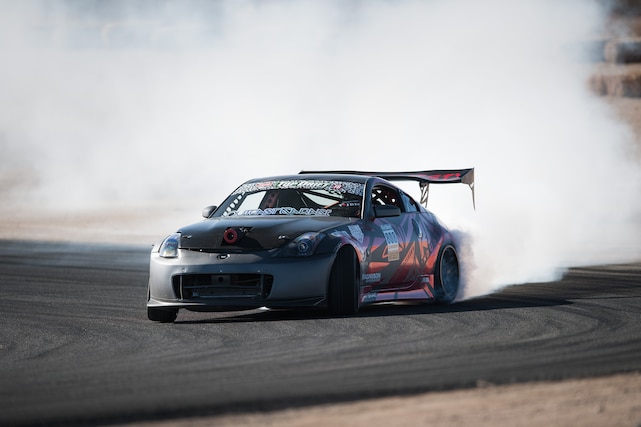 9:00 p.m.
(Top 8) After a fairly uneventful Top 16, Top 8 was anything but! Season points leader Jason Kim and his immaculate “Rhino Wash” S14 lost to Alex Grimm in the 240Z, clearing the way for challengers to gain ground in the season points chase. When second-in-points Adam Knapik and his chrome-red no. 151 S14 met Shawn Illingworth (who had a strong first-round finish) in that 350, stands were full and fans on their feet. After some heated battling, Adam was locked and loaded on the leaderboard, heading into the Top 4. 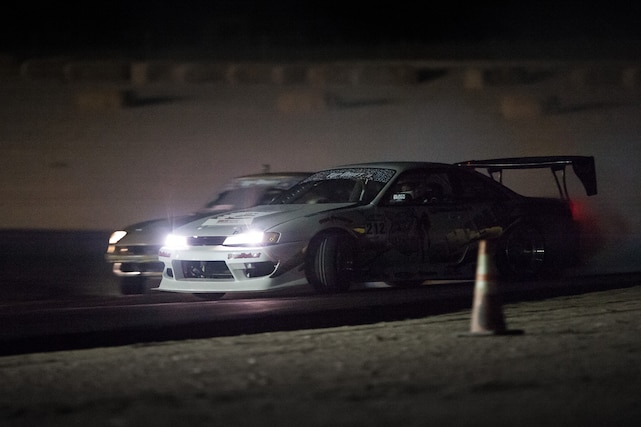 9:30 p.m.
(Top 4) #holyshit — another upset to kick off Top 4, when Round 2 winner Sean Adriano and the no. 562 S13 240SX that was Jason Kim’s 2015 competition car (Adriano beat Kim in it at that Round 2 final battle) also fell to Grimm and his 240Z. By now the crowd had started going crazy, both in support and disbelief. Top Drift’s previous event also saw Adam Knapik battle, and ultimately lose to, Dominic Rotondo for third place. Top 4 this time around hosted the rematch. Knapik took his revenge after a notable mistake (within otherwise strong runs!) by Rotondo, and moved onto the Finals.

10:00 p.m.
(Finals) After toppling Round 1 winner and points leader Jason Kim, and then toppling the man who beat Kim to take the Round 2 win, as impressed as we all were in Grimm’s effort thus far, I really didn’t think his luck would hold through a battle with who I consider the second of Top Drift’s two strongest competitors. And after the first Final run in which Knapik laid down a flawless lead run against Grimm’s sufficient-yet-imperfect follow, I figured the round and top spot in season points were in the bag for Knapik. But then came the second run, and — for reasons unknown to this day — a straighten by Knapik on initiation following Grimm, and another sufficient run by Grimm. 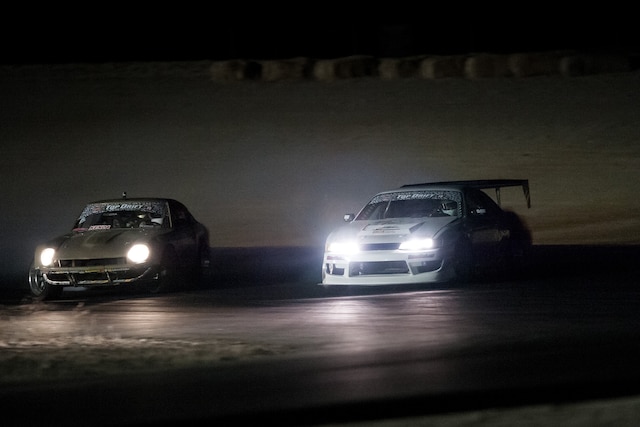 10:30 p.m.
(Winner’s Circle) When there’s a major flaw in one person’s run and the judges fail to call a “one more time” battle, it’s pretty clear who will get the win. Still, tension and uncertainty loomed in the (thankfully) cool night air while fans and competitors gathered at the podium, awaiting the announcement. 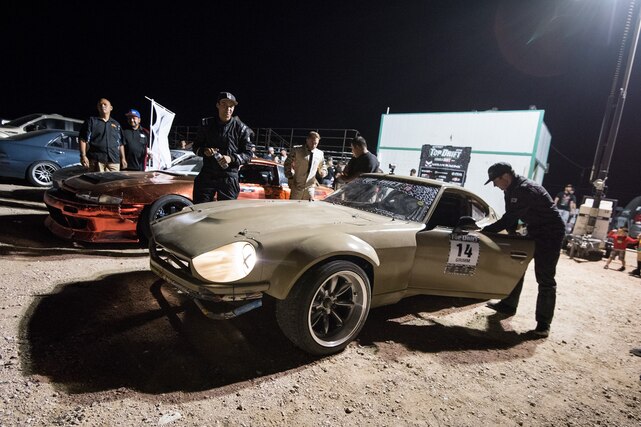 Joyed at the realization that he’d gone much farther in this competition than I think he ever expected to, Grimm fought hard to hold back too many smiles until the final word was given. 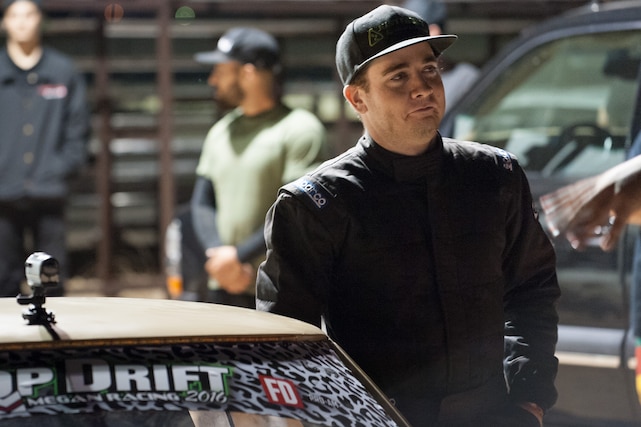 Knapik stood mostly expressionless, nervously awaiting a small miracle that might have him on the top step of the podium after all. 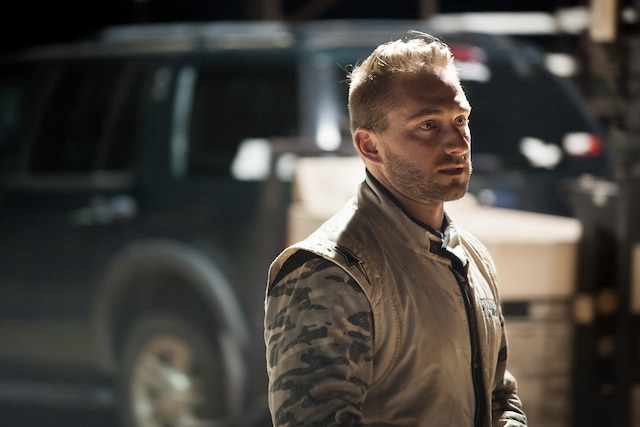 Adriano, who had taken third place in the “last chance bracket” kept his celebrations to himself, no doubt analyzing what he could’ve done to place higher. 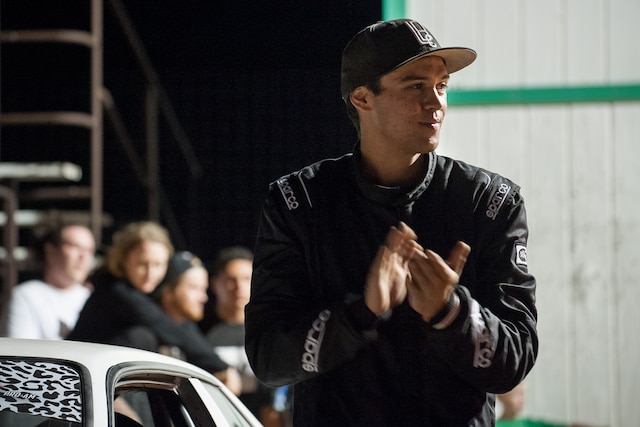 When the verdict was handed down, it was Grimm, Knapik and Adriano in first, second, and third, respectively, for the round, and when the points were tallied for the season, Kim still stood as leader with 277 points, followed as close as can be by Knapik with 276, and Adriano narrowing the gap in third with 252. Cue disbelief, relief, celebration, and champagne. 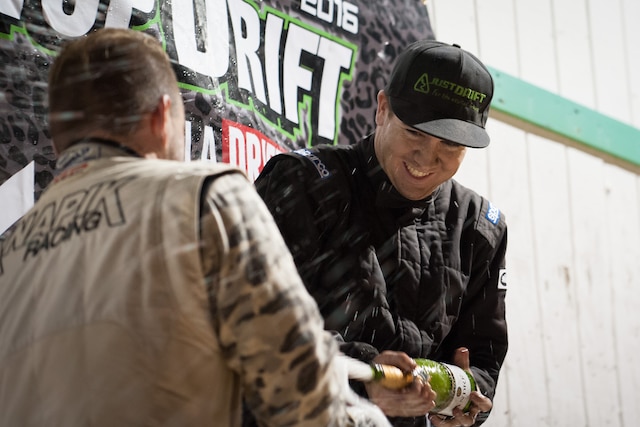 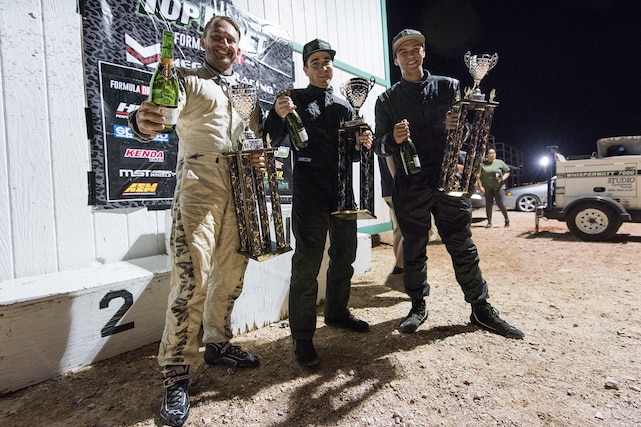 Round 4 goes down in about a month, back for another night event at Willow Springs, this time at the more terribly lit Willow Speedway oval. Which of the top three will take it? Will yet another underdog challenger crash the party? Really, nothing would surprise us at this point. 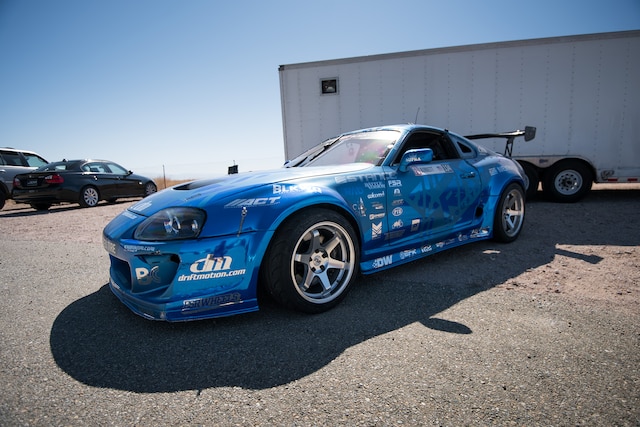 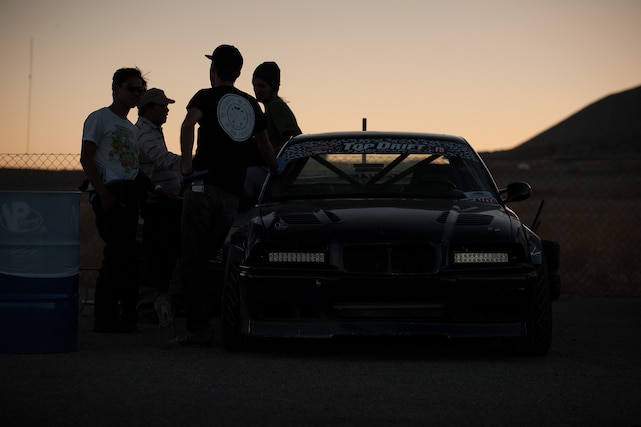