Speed And Spins At The Slam 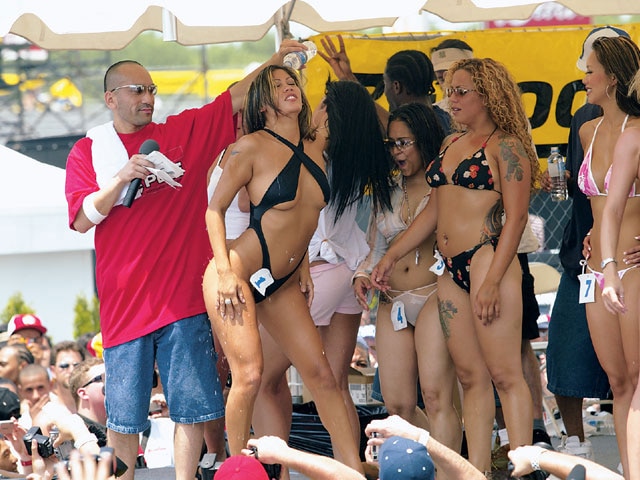 Vinny would have to be on top of his game if he would defeat Jorge Juarbe, driving the 300Z owned by Cesar Febus. Juarbe had easily taken out Jose Escalara in the first round when he fouled, and Jose Ramos was more than a second slower in the semis. But after Vinny's and Juarbe's burnouts in the final round, what could have been an incredibly close race was all lost. While backing up, Vinny rolled back a little short. Juarbe staged and Vinny moved forward to do the same, but rolled the beams. Vinny sat expecting the starter to allow him to move back, but the lights were popped and Juarbe was gone with Vinny's lane lit red. This gave the rather anticlimactic win to Juarbe.

Pro Class
It's always entertaining when two identical cars cross the finish line at speeds of more than 200 mph. And that's what Goerge Ioannou and Ara Arslanian gave the crowd in the first round. Both competitors left the line with their Solaras at the same moment, but Ioannou had just a little more power as he pulled ahead of Arslanian by the finish by half a car length.

Grant Downing and the Venom Tundra and Matt Hartford and the Summit Racing Cavalier had a hard time breaking in the first round. This put Jorge Lazcano against Jose LeDue in the semis. And while Lazcano has run 7s in the past, he gave the instant win to LeDue when he red lit.

Ioannou had a Bye in the semis, but the real drama occurred after his pass trying to crawl out of the driver's seat. After removing his helmet, Ioannou scraped his scalp on the latch that holds up the safety netting, leaving a bleeding 3-inch gash. Medics wouldn't let him run his final round until he went to the hospital. Would he make it back to the track in time to make his final round run against LeDue?

With the final round almost through, a stitched-up Ioannou was rushed back to his racecar waiting in the lanes. And to show the crowd just how well he was doing, he laid down a 6.857-second pass at 203 mph, shutting the door on any hopes LeDue may have had of taking the Pro Class win.

All Motor
Competition was close as most all-motor entrants were within a second of each other. If any competitors had a bad launch or poor reaction, they'd probably be packing up early. In the quarterfinal round, the old-school VW Bug of Daniel Rodriguez took out the Corrado of Nate Romero.

But any hopes of Rodriguez finishing first were squelched in the semis when he ran an off-pace 12-second pass to Chad Barber's 11.426. Barber had taken out Edwin Velez in the quarterfinal round, and with a victory in the semis, Barber secured a position in the finals.

Also making his way through the pack was Buddy Dunagan. Dunagan wasn't the fastest all-motor car, but he was the most consistent, running solid, low 12-second times as well as garnering quick reaction times, as Lisa Feehely saw in the quarterfinal round and Dedrick Medina saw in the semis. Dunagan managed a holeshot on Chad Barber in the final round, but it all came down to horsepower. Barber was able to easily pull ahead of Dunagan by midtrack, finishing almost a second faster and giving Barber the IDRC All-Motor win.

Every year I look forward to covering the Summer Slam. It's the pinnacle event in import drag racing and the import scene. Every Fourth of July weekend, Englishtown Raceway plays host to more than 20,000 people who are treated to hundreds of show cars, the BMX and rollerblading exhibitions, the lowrider hydraulic competition, bikini babes, automotive vendors, and blisteringly fast import racecars. It's sensory overload for all who attend, and this year was no disappointment.

Drama unfolded in the first round of qualifying when Dave Buschur smacked the wall at more than 120 mph with his tube-frame Outlaw Mitsu Eclipse. The wreck had the crowd awestruck, but amazingly Dave Buschur immediately jumped out of the car with his hands in the air, signalling he was fine. If that wasn't enough excitement, in the second round Vinny Ten set a personal best time of 7.880, a goal he'd sought to accomplish for more than two years. Not only was that enough to realize a dream, but it also secured a number one position in the Outlaw Class. This barely scratched the surface of the weekend's entertainment.

Street Tire
The Street Tire Class was filled with cars you'd never want to come across at a red light, with two competitors (Ari Yallon and John Shepherd) running sub-10-second passes. Yallon had a fairly easy time beating Ali Afshar in the first round and Adam Dubiencauk in the second. With a Bye in the semis, Yallon was in the final round.

John Shepherd finally broke out the nitrous for his Mitsubishi Eclipse this year and has been running low 9-second passes with it. Shepherd took it easy in the first round, beating Albert Vega with only a 9.848, but he unleashed the beast in the semis against Jeff Hill, running a 9.248 at 157 mph.

Ari Yallon would have to run his best round in the finals to beat long-time rival Shepherd. When the tree dropped green, a lucky Yallon got the instant win when Shepherd dropped the clutch too soon. Yallon had also redlit, but Shepherd moved even sooner, making Ari Yallon and his Mazda RX-7 the Street Tire champion.

Quick Class
You could see just about any powerplant and drivetrain combination in the Quick Class. But after the first round, clearly it was Honda vs. Toyota Supra, with the Supras dominating. The only people who could give the straight-six turbo power of Paul Effantis and Mark Mazurowski were Sav Leone and Gary Gardella. Leone broke in the semis against the Titan Motorsports Supra, putting Mazurowski in the finals. Gardella ran high 8-second passes that were fast enough to beat Effantis, but his reaction was too slow. Gardella tried to pursue, but couldn't come back.

A Supra against a Supra made for an exciting final finish. Effantis was favored to win, having run almost a second faster than Mazurowski's best, but Mazurowski got a car-length holeshot and maintained it to the finish line for the upset and the Quick Class winner title.

Outlaw
By the time you read this, Vinny Ten might have already legally changed his name to "Vinny Seven" as he finally met his goal of breaking into the 7s with his Supra. And with a Bye in the first round and Carlos Montano red lighting in the semis, the final round would determine if Vinny would have the icing on his cake.