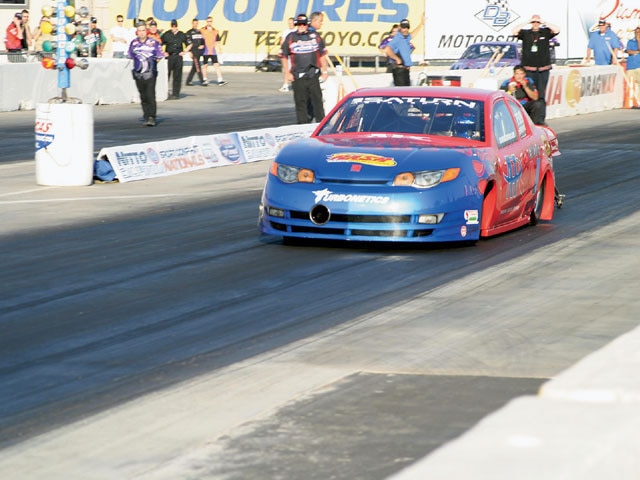 Like every year, there was much anticipation for the opening of the 2004 NHRA Summit Sport Compact season. Rule changes, including the use of aftermarket transmissions, put the focus on Turbo Magazine Hot Rod racers and the race for the 7s kept a discerning eye on the Pro FWD racers. While rumors of impressive pre-season testing abounded, testing crashes, unfinished cars and hurriedly finished cars killed the buzz as some of the classes were well short on cars.

Turbo Magazine Hot Rod class champion Marty Ladwig rolled off the trailer and into the record books when he crushed the existing class record with an 8.340 at 170.62 mph. By the end of qualifying, only Mike Crawford in the Mopar Neon could join Ladwig in the 8s with an 8.847. New Jersey native Gary Gardella was in the hunt at 9.033 and Kenny Tran checked in fourth with an off-pace 9.766.

In eliminations, a field of eight gathered in the staging lanes. In the first pairing, Gardella beat Ricky Dela Cruz, who never got rolling. In the second set, Ladwig kept the 8s rolling with an 8.592, which easily dispatched Dan Trvong and set a new class e.t. record, backing up his 8.34 in qualifying. Tran ousted Gavin Winn with a 9.49 to Winn's 16.16 that had his Talon popping loudly as it struggled down the strip. The last pairing was a spin-and-win proposition, as both Mike Crawford and Eric Del Rosario had traction woes off the line. Crawford gathered his momentum best, pulling away to a big 9.55 to Del Rosario's 10.07.

The semis had all the big dogs, but it also had some anti-climactic shenanigans. The first semi pitted Gardella against Crawford. Gardella couldn't get his Honda started and, to his credit, Crawford waited as long as he could; only when the starter gave him the evil eye did he pull to the staging lights. Crawford advanced to the finals with a 9.02. Tran couldn't answer the bell and Ladwig was looking at a free pass to the money race. But in the burnout box, the Sunfire made some frightening noises. Ladwig couldn't get to the staging beams and the race was a rare double loss. In the final, Crawford staged and putt-putted to victory lane.

In Pro FWD, only four cars battled it out, but as long as Lisa Kubo and Nelson Hoyos were in the field, it was a must-see. Kubo picked up right where she left off in 2003, running an 8.15 in the first round of qualifying and an 8.02 at 186 in the last Q-pass. Hoyos was second with an 8.43 but the rumor mill has him going 7s in the off-season, a claim that was supported by Ladwig's 8.34. The bottom half of the lineup included Ron Bergenholtz with an 8.60 in his Mazda 6 and Jojo Callos in his Nissan with a still-shaking-down 10.39.

Kubo lifted in eliminations, as evidenced by her slow 142-mph trap speed, but her car looked good as she posted an 8.39. Hoyos got his act together, beating Bergenholtz handily with an 8.21.

This final matchup made up for the debacle in Hot Rod, as both drivers got off the line together. But this race was decided at the 60-foot timer, where Lisa's 1.288 was too much for Hoyos' 1.378. Kubo carried her speed down the strip, clocking an 8.055 to Hoyos' 8.397. She reset the record to 8.02 and Shaun Carlson is hurriedly completing his car before Moroso because the 7s could very well fall in Florida.

In Modified, it was three rotaries against one piston engine. Carlos Gonzalez made up half the field and it was an old-school vs. new-school battle. Confused? Paul Efantis was the new-schooler and sole piston-powered entrant in his brand-new Supra-powered Solara. Carlos Gonzalez Sr. was driving a 1991 RX-7 and his son Carlos Jr. was racing a 1973 RX-3. The fourth car in the field was Rene Franco's RX-3.

Efantis, who is teaming with Bullish racing on his engine program, came out swinging with an 8.10 and 7.72 on the car's first two full passes. Carlos Jr. checked in second with an 8.66 and Rene Franco posted an 8.97, while Carlos Sr. managed only a 10.07.

The battle of the RX-3s in the first round went to Carlos Jr. 8.37, while Efantis denied the crowd of an all-rotary, father-vs.-son showdown by dispatching the elder Gonzalez with a quick 7.82.

Efantis looked to have all the momentum going into the money race. Unfortunately, he lost sight of the big picture and tried to tree a car he had a 555-second advantage over in the previous round and red-lit. The win went to the old-school rotary that got out of shape and cruised to a victorious 33.90-second e.t. Either way, the Gonzalez family will have the wind at their backs on the return trip home to Florida.

In Pro RWD, it was business as usual. The Street Glow Solaras were atop the chart. George Ioannou was the only one in the 6s with a 6.895 at 202.55 mph. Street Glow's biggest challenger, Stephan Papadakis, wasn't in attendance as a pre-season testing accident sidelined his Honda after posting a best-of 6.68 at 211 mph. Matt Hartford was shaking down a new engine and driveline at Fontana as he has replaced his Ecotec four with a V6 scavenged from a Cadillac STS. Abel Ibarra was debuting his new RX-8 and had some engine gremlins holding him back.

In eliminations, Hartford broke a driveshaft after breaking a tranny the day before during qualifications. So Adam Saruwatari advanced. Abel couldn't get his engine to rev and Ara Arslanian advanced. The hardship continued as Manny Cruz sputtered and lost the fire in his Cougar, while Brad Pedsonett cruised away in his impressive 2JZ-powered Titan Motorsports Celica. Luckily, Ioannou had a single because his Solara wouldn't idle. He wisely bypassed the burnout box and took a putt-putt single.

After running an 8.57 in the first round, Saruwatari was a no-show. Arslanian was ripe for the taking as he wavered and then grenaded a motor, coasting to a 10.08. Ioannou's Solara was wounded and performed a few dry-hops between the burnout box and the staging beams to check things out. There was some quick discussion about shutting the car down but Ioannou would have none of it.

In the beams, Pedsonett's Celica jumped prematurely and lit the red bulb. George advanced, making it an all-Street Glow final. With all the battered parts laying about in the Street Glow pits, the final was a one-car show in which Ioannou limped to a 15.04 to take the Wally.

The Honda Tuning All-Motor Class had 20 cars vying for 16 spots. Many of the top West Coast Honda racers were on the warpath. There were 12 Hondas, two VWs and two Mazdas in the Fontana field. Ken Scheepers in a 1985 Mazda RX-7 was the number one qualifier with a 10.387, and Tom Fujita was the final qualifier at 11.373. The most notable racer left out was 2003 All-Motor champion Scott Mohlers. Honda racers included class recordholder Leslie Durst, Bisi Ezerioha, Erick Aguilar and Jeremy Lookofsky.

Leslie Durst was the first of the hardcore Honda casualties. She wrecked her CRX in the second round of qualifying. Also in the second round, Lookofsky squeezed by Beetle pilot, Jack Sacchette, by a fender, Aguilar fell to Scott Kelly's VW fastback and Eszerioha advanced.

In the semis, Lookofsky broke in the burnout box and Bisi failed to answer the call, setting up a Cloyse Holland-vs.-Scott Kelly final. It was a thriller-Kelly got the jump at .505 to .531 and hung on with a 10.62 to Holland's 10.76.

Deja vu hung in the air in Fontana. Last year's season opener involved a lot of breakage and some anti-climactic moments. This year included the added variable of short fields, but the cars went together quickly. We should have a lively and full dance card at Moroso. Stay tuned. 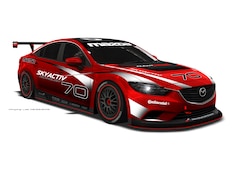 Mazda has announced that a racing version of their 2014 Mazda6 will be competing in the Rolex 24 endurance race and it will be ppowered by a Mazda SKYACTIV-D Clean Diesel engine developed for the new GRAND-AM GX Class. - Modified Magazine