1972 Mazda RX-2 - One of Australia's Most Lethal Rotary Weapons 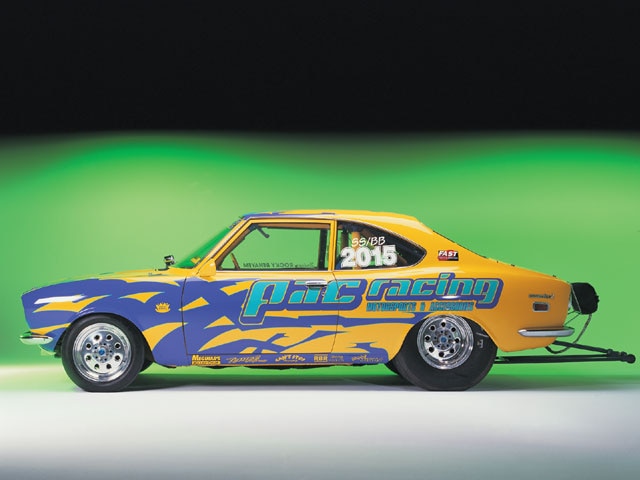 Australia is filled to the brim with kooky go-fast junkies, God bless them. It should be noted that while extreme by American standards, Mad Max and his supercharged V8 were middle-of-the-pack commuters in Australia where the growth of high-performance parallels that of our own import scene in many ways.

Like America, the Australian scene is driven by drag racing and many of its big-time players can trace their roots back to street racing. A good cross-section of the Aussie car culture can be found on the staff of Fast Fours & Rotaries magazine-a title that many have called Turbo down-under. The Fast Fours & Rotaries staff have kept a keen eye on the Southern California scene-publishing articles on Battle of the Imports, Import ShowOff, the SEMA Show and the International Auto Salon to name a few. The Aussie scene is a mix of SoCal spirit, Australian intensity with a sprinkling of Puerto Rican spice.

Turbo is not afraid to go worldwide. We've gone to Germany, Japan, Puerto Rico, the Cayman Islands and a few other exotic locales to bring back the best and brightest stars of import performance. We have not been able to make it to Australia (yet) so FF&R's editor Dean Evans has brought one of Australia's mightiest 13B-powered monsters to us. Pac Performance campaigns the country's quickest RX-2, the highly detailed Mazda that graces these pages.

The 1972 RX-2 started prowling the streets of Sydney a decade ago and the driving forces behind the car, Rocky and George Rehayem, have come a long way since the early street days. From wrenching on motors in their backyard the brothers Rehayem formed Pac Performance and have gone from a shade tree to a full working shop. The brothers saw a parallel with how their yellow RX-2 treated its competition and how the Pac-Man of video game fame treated his; that's where they got their business name from. Since then, the brothers have gobbled up the competition at every turn. Rocky pilots the RX-2 which, surprisingly, is not the quickest car in the stable; George's 20B RX-3 is a couple ticks quicker (8.72 at 154 mph). Like in Puerto Rico, there are plenty of chances to blast down the strip in Australia. Consequentially, there are a number of well dialed-in combinations roaming the strips (and streets) of Sydney, Melbourne and all points between. The Mazda's evolution really took off in 1999 as the RX-2 blasted to the top of the heap with an impressive 8.86-second, 150-mph road trip down the quarter mile. The triumphant run was made at Adelaide's Four & Rotary event with an ambient temperature of 38 degrees Celsius (100 degrees Fahrenheit). The RX-2 is a Pro Street racer in Aussie speak. (We are not sure what class that translates to in American terms.)

The success of this car can be traced back through 10 years of evolution paired with a wave of new-age technology. Starting with a fresh Series 6 RX-7 engine, Pac Performance machined the rotors to accept 3mm, two-piece apex seals. The side plates have been massaged with a turbo porting to Pac's own racing specs. Reliability has been enhanced with modifications to the eccentric shaft and the use of multi-window race bearings in the rotors, as well as a complete dry-sump oiling system. Pac retained the factory intake manifold but port matched it for optimal flow. The 13B is pressurized by a Turbonetics turbo whose specs are so secret the unit was covered for the FF&R photo shoot. Pac reports max boost is regulated to 24 psi via a Garrett race-spec wastegate. The turbo sends boost through a massive RBR front-mount, air-to-air intercooler that's so big it makes one ask, "Is that an RX-2 attached to that intercooler?" The cooler extends from the base of the hood to well below the front spoiler.

Spent gases are evacuated by a custom 3.5-inch mandrel-bent exhaust system that is quiet enough to meet Eastern Creek Raceway's noise standards (a sound familiar e.g. Pomona Street Legal Drags). One of the impressive aspects of this Aussie rocket is that it has run methanol for the last couple of years and recently switched back to a special mix of VP race gas yet the car has continued to improve its performance.

As with many high-tech racers, leading-edge engine management is at the core of the matter. Pac Performance relies on a MicroTech MTX-8 system which features sequential injector control and sequential ignition timing. Ignition chores are handled by a MicroTech CDI ignition set-up that utilizes Jacobs igniters to fire heavy-duty racing coils that electrify the combustion chambers to the tune of 650 hp.

Transferring that power to the ground is a battle-proven Jerico four-speed gearbox that uses a pound billet flywheel and Tilton triple-plate clutch to engage the driveline. The Jerico was selected because it is relatively inexpensive, can be fitted with scores of different gear ratios and sports a low parasitic drag quotient. From the tranny, thrust is funneled through a Mark Williams rear end that flexes 35-spline axles and a 4-inch tailshaft. The Williams unit is stuffed with 5.88 gears which work in conjunction with 31x18.5-inch Mickey Thompson gumballs to motivate the 2420-lb Mazda at a frenzied pace. This combination nets consistent 1.28-second 60-foot times but the crew feels that 1.20s are attainable. The Mazda is described as a quarter-chassis car with a four-link rear suspension locating the Williams rear end.

Let's see it's a Mazda running a Mazda powerplant but is using a Jerico gearbox and relying on a quarter-chassis set-up. That makes it practically impossible to classify in U.S. terms (Street, Quick, Outlaw, Pro). Street Class? Yes, this mad Mazda still prowls the streets on occasion. Looking closely at the accompanying photos, you can see the car is registered for street duty (EZY 08S plate) but with 8.86-second potential the streets of Sydney are as lonely as the Outback with few takers when it comes to stoplight grand prix showdowns. Pac Performance says there is still more in the motor and Rocky and George plan to continue to push the envelope with the current set-up. If Pac Performance's rivals catch up, there are plans to infuse the RX-2 with a mist of nitrous oxide. That'll really put the squeeze on the competition.