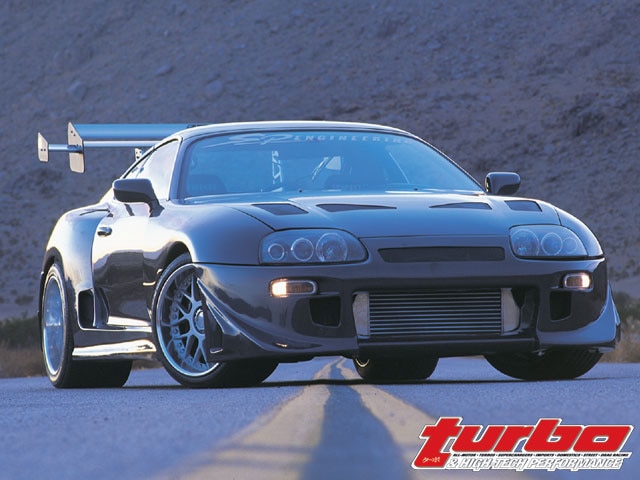 The goal of every car enthusiast is to build the ultimate street machine. Many show enthusiasts concentrate solely on the style of the vehicle, creating a unique appearance by adding body kits, upgraded interiors, wheels, etc. Yet there are also race enthusiasts that believe the ultimate street machine would include a high-performance engine package with matched suspension and brake upgrades. But rarely you see a modified vehicle that encompasses all spectrums of the race and show scene.

When we first eyed Mike Hou's 1997 Toyota Supra at a Hot Import Nights event we thought it was another show car with a crazy wide-body kit. To our surprise, this was no ordinary show car. Catching our attention immediately was the custom twin-turbo conversion modified by SP Engineering. After talking to Alex Shen, co-owner of SP, we got the real scoop on this wild JZA80.

Like all extreme import creations, the evolution of Mike's Supra started off with simple bolt-on upgrades. It was not too long thereafter that Mike was bitten by the speed bug. Mike and SP Engineering devised a battle plan for adding speed and style to the Toyota supercar. To produce the kind of horsepower that Mike craved, the factory sequential turbo system was swapped in favor of a parallel twin-turbo kit. Having built a reputation for creating crazy high-horsepower street machines, SP Engineering ordered the necessary parts for the twin-turbo conversion. A stainless-steel twin-turbo manifold from HKS is responsible for collecting all spent gases and directing them to two T3 flanges. The heat energy of the spent gases propel two HKS/Garrett GT2835 ball-bearing turbochargers. The HKS/Garrett ball-bearing turbochargers were chosen because of their quick spool time, which is ideal for the street. Regulating the turbochargers to 1.6 bar is a pair of HKS Racing wastegates and a HKS EVC IV boost controller. Twin HKS Power Flow air filters cleanse the air coming into the turbos. Post compression charge air is then directed through chrome HKS I/C plumbing to a GReddy four-row, front-mount intercooler. To ensure the chiller is providing optimum cooling power, a SP Engineering intercooler temperature gauge monitors charge air temperatures going into and out of the intercooler. The gauge not only shows both temperature readings but displays the difference. A GReddy Type-R blow-off valve prevents compressor surge.

Generating airflow is only half the battle when it comes to making power. Proper fuel tuning is equally as important. Supplying go juice to the HKS fuel rail is an upgraded SP Engineering in-tank fuel pump. Making sure the thirsty 2JZ-GTE engine has enough to drink a set of larger 680cc top-feed injectors from Blitz are on call. Regulating the fuel pressure is an upgraded TRD fuel pressure regulator. A HKS Vein Pressure Converter (VPC) and Graphic Control Computer (GCC) fine tunes the fuel curve for reliable maximum horsepower output. The ignition system has been left untouched with the exception of NGK Racing spark plugs.

Unlike many imports that require internal engine fortification when high-horsepower is on the agenda, the 2JZ-GTE powerplant is as solid as a rock. The engine has been left untouched except for a pair of JUN adjustable cam sprockets connected to HKS 264 performance camshafts. With this performance combination SP Engineering was able to extract 655 horsepower to the wheels on Brothers Performance DynoJet! That is some serious horsepower from a stock powerplant. The 3.0-liter engine is producing an amazing 250+ horsepower-per-liter at the flywheel...And they say there is no replacement for displacement.

Producing power is one thing, transferring it that thrust to the ground is a whole other story. The factory clutch and flywheel were swapped in favor of an OS Giken triple-plate clutch assembly. The factory six-speed gearbox spins a super-light carbon-fiber driveshaft. Trying to keep the Supra firmly planted out back is a pair 18x13-inch Lowenharts mounted on extra sticky 335/30ZR Pirelli P-Zeros. In front the Toyota runs equally impressive 18x11-inch Lowenharts mounted on 275/30ZR Pirelli P-Zeros. The Supra's low, ready-to-pounce stance is made possible by Tein coilovers. The shocks are fully adjustable, featuring 16 points of adjustment. This enables the driver to dial-in the ride for any road condition. Negative and positive camber can also be adjusted with the help of a Tein adjustable camber kit. For extra chassis rigidity Cusco front and rear tower braces were added, while ARC front and rear sway bars are on call to fight off body roll. Since safety is equally as important as speed the factory braking system has been upgraded with Brembo calipers and rotors.

Mike planned to tour the show circuit on a regular basis so the Toyota was put on a body-tuning program. Con-sequently the factory sheetmetal underwent some serious massaging. Custom front fenders and rear quarters were fabricated giving the Toyota an aggressive wide-body look. A TRD fiberglass hood not only gives the Toyota a unique appeal but also thanks to its ducting also reduces underhood temperatures. The front and rear fascias have also been replaced giving the Supra a more assertive aura. The dramatically reworked body was painted Gun Metal Gray by Unreal Creations in Industry, California completing the Supra's exterior make-over. Adorning the rear hatch is an APR custom aluminum wing.

Although there is nothing written in stone, there is a thin red line that separates drag racers and show car enthusiasts. However there are a few cars that are able to cross the line and gain the respect of both camps. Mike's Supra vividly illustrates the kind of balanced attack it takes to attain this dual citizenship.