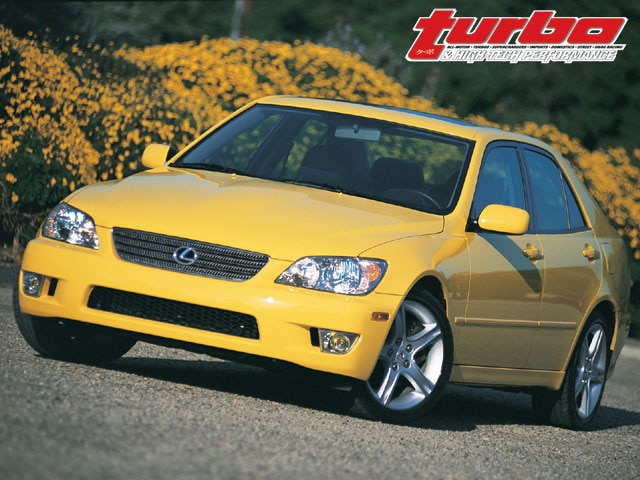 The excitement generated in Japan by the Toyota Altezza whetted our appetites for the U.S. version-the Lexus IS 300. Turbo featured a Japanese-spec turbocharged Altezza on the cover of the May '99 issue and has featured examples from Sard of Japan and Axis Sport Tuning of California in subsequent issues. We have also tapped into the IS 300 rumor mill and published many of the specs that were being struggled over as the car neared full production specs. As the press launch grew near, many questions regarding the 2001 Lexus IS 300 were answered, some were still unanswered. The IS 300 represents a radical departure for Lexus because it is designed as a sports car first, with performance and handling put ahead of luxury. The car is engineered to attract a younger audience-25- to 40-year-olds according to Lexus, which is well below the company's typical 50-something demographics. Pricing will be key; we hope to see a departure of sorts by seeing a 25- to 40-year-old type of price tag.

Beyond the sticker price, many questions were centered around the drivetrain and these were answered at the car's introduction. Under the hood, the Lexus IS 300 will come standard with a 215-hp, 3.0-liter inline six cylinder engine that employs continuous Variable Valve Timing with intelligence (VVT-i) to optimize valve overlap throughout the engine's speed range (not just at one or two set speeds). VVT-i eliminates the traditional compromise between low-end torque and high-rpm horsepower, giving the IS 300 a broad, linear powercurve. The IS 300 engine produces 218 lb.-ft. of peak torque at 3800 rpm.

Gear selection was another controversial aspect of the car. For the first model year, the inline six will be paired with an electronically controlled, five-speed automatic transmission with Formula One-inspired E-Shift steering-wheel gear-selection controls. Look for a manual stick shift in the 2002 model. There was a good deal of discussion about offering a manual, and those in favor won, but did so too late to get the manual gearbox into the 2001 version. It should be noted that the IS 300 is a front-engine, rear-wheel-drive proposition which opens the doors to even more tuning potential. The IS 300 was created to combat the BMW 3-Series and Audi A4, so handling was a top priority.

Lexus engineers positioned the engine center 2.2 inches behind the front wheel center, placed the battery behind the front suspension tower and installed the fuel tank under the rear seat to give the car exceptional balance and response. The IS 300 sports a 54/46 weight distribution, comes standard with Lexus' TRACS traction control system and features an optional limited-slip differential for the real canyon carvers out there. The suspension itself consists of a four-wheel independent set-up, which features a double-wishbone layout in the front and rear, similar to that found in the GS sedans. The Lexus rolls on attractive 17x7, five-spoke aluminum wheels and 215/45 R17 performance rubber.

The two most promising carryover traits of the Japan-spec car are its sculpted silhouette and trick gauge cluster treatment.

The IS 300 retains the Altezza's sculpted body and aggressively short overhangs. Minimal changes were made and we hear that most Japanese body kits will fit with little modification.

Inside, the IS 300 has a tuner-esque aura, thanks to drilled aluminum pedals, stainless-steel doorsill scuff plates, sporty bucket seats and a trick gauge cluster. A unique, chronograph-style combination gauge cluster, inspired by sport watches, dominates the instrument panel. While giving the IS 300 a unique interior appearance, the chronograph instrument cluster allowed designers to package eight instrument readouts within clear view, through the standard leather-wrapped, three-spoke steering wheel. The cluster contains gauges for coolant temperature, battery level and average fuel consumption. Flanking the main dial are a tachometer on the left and a fuel level gauge and gearshift position indicator on the right. We would have preferred an oil pressure gauge in place of the fuel mileage monitor, but since the 3-Series BMW has a similar dial in its cluster, we can see why Lexus took this route.

The introduction was conducted in Santa Barbara, Calif. and journalists were afforded a good deal of seat time. It took mere blocks of driving to ascertain that handling tenacity is where Lexus' radical departure is most evident; the low-profile tires and firm (downright hard for a Lexus) suspension dampening provide a truly tossable vehicle. We had an ample amount of off-the-beaten-path roads to test the agility of the IS. One section of asphalt had a dip just prior to a sweeping left hander. We took the car in hot and were amazed at how quickly the chassis settled after negotiating the dip. Going in, we thought we were in a little trouble, but the car settled just in time to receive steering input and blast around the corner at 75 mph.

The suspension was primed for all we threw at it-quick 180 degree turns, an early apex, a late apex-even turns under heavy braking were conquered with ease. The combination of ride quality and handling, which are usually at odds with one another, was exceptional. The suspension seemed to know instinctively when to firm and when to soften. The inline-six provided ample power, but a stick shift would have allowed us to better shell out the power at the apexes. The E-Shift is a cool approach, but we did not have the time to master the system, so perhaps one can properly regulate the power as the car sits, but we still want a clutch and manual gearbox.

As far as tuning goes, we learned that the Supra swap is a bolt-in, but the short overhang makes intercooler placement tricky. There are also rumblings of a TRD supercharger system and a turbo kit from Rod Millen. There should be plenty of suspension components from springs, to coil-overs, to bars and towers as well as a gangload of body-tuning possibilities. We'd love to take a crack at tuning an IS 300 (hint, hint) and can't wait to see some wild radical departures prowlin' the streets.