Home  |  Features  |  Heart of the Beast
Subscribe to the Free

Heart of the Beast

Think the days of the swap are over? Think again.

Phoenix, Ariz., is about 350 miles from the palatial offices of Primedia. That translates to a roughly 5-hour drive...if you keep things legal. The reason for our journey wasn't to bask in the hot Arizona sun, but to find out what the engine-swapping fanatics at Hasport were up to.

If you've done an engine swap with a Honda, seen it done, or know someone who has done one, you are probably familiar with Hasport. The company has established itself as the king of engine mounts. Owned and masterminded by Brian Gillespie, Hasport has found a way to put pretty much any four-cylinder Honda engine into almost any chassis. Most commonly, Integra B-series engines find their way into various Civics. Sometimes it's a Prelude engine. But if you have a more powerful four-banger that you want to put into your Civic, Hasport is the company to call.

But swapping is an old story, in a way. Everybody knows the Civic and Integra are closely related, and that dropping in a B-series engine in place of the D is relatively simple. The engine bays are virtually identical, and even the engine mounts that Hasport makes are only slightly modified to accommodate the larger powerplant. Hasport has even made it possible to swap B-series engines into 80s-vintage ED Civics.

K20A2 is the new iVTEC engine found under the hood of the new Acura RSX. We've waxed on about how much we like this powerplant, and about how much potential we think it has, so we'll spare you our gushing praise.

EM is the chassis code for the 2001-and-up Civics. It's a significantly different design than the previous EK Civics, with a MacPherson strut suspension, a highly modified rear double wishbone suspension, a firewall-mounted steering rack, and numerous other changes.

DC5 is the chassis code for the RSX. It's a significantly different design than the previous DC2 Integra, with a MacPherson strut suspension, a highly modified rear double wishbone suspension, a firewall-mounted steering rack, and numerous other changes.

Forgive us for the redundancy, but that's the point. It turns out the RSX and Civic are virtually identical under the skin. And despite the radically different powerplants--with the Civic soldiering on with the tried-(but tired) and-true D-series engine--they aren't that different. Gillespie noticed this early on, and realized there had to be a way to swap the powerful K20A2 into the weak-kneed D17's home.

Then, one day, we got a picture in our e-mail. It was from Gillespie, and clearly showed the K engine sitting snugly in the nose of a Civic, headlights and "H" logo badge clearly visible. We picked up the phone and asked when we should be there.

Roughly a month later, we found ourselves on the long, boring road to Phoenix. Not that we have anything against desert scenery. It's just that there's so damn much of it, we were actually thankful when we hit the urban sprawl of the desert city. We cruised through town, winding our way to Hasport's shop.

When we arrived, the car was on the rack without a front bumper and without a radiator. It was about 3:30 p.m. We were scheduled to photograph the car at sunrise the next day. There were about 12 hours to finish roughly 24 hours worth of work, and that was just to get the car running. To reassemble the interior would have taken even longer.
Uh oh.

We kindly offered our services to assist in any way possible to get the car running, and at 2:30 a.m., Gillespie took us up on our offer. Bleary-eyed, we made our way from the hotel to the shop to find the car significantly more together. With only a couple of hours until sunrise, we worked together to finish the final touches and get the car running.

We didn't make it. A missing wire, unplugged connector, or a computer that needed a jumper somewhere prevented us from starting the car. The sun wouldn't wait, so we towed the car to our photo destination and proceeded to push the car to the various angles.

OK, so the car wasn't running, but it wasn't because the swap wouldn't work. It was an electronics problem, pure and simple, and one that Hasport quickly overcame after our visit. It also underscored the difficulty of an engine swap, regardless of however simple it may be mechanically. Which, surprisingly, the K swap is.

Even though we can't give you an impression of how the swap drives, we can tell you how well it fits. The engine looks like it belongs under the hood of a Civic. Hasport's mounts settle the engine nicely in the bay, neatly accommodating the differences between the RSX and Civic engine compartments. The devil is in the details, however, and because of the different orientation of the D and K engines, there is plenty of auxiliary work that needs to be done. Fuel lines need to be rerouted, as do lines for the clutch, shifter cables, throttle cables, water and heater lines, etc. Pretty much anything that attaches to the engine either needs modification or rerouting. But the same holds true when you plunk a B series into a Civic. For a closer look, check out "Heart Transplant" on page 28.

The future for this car is bright. Hasport plans to turbocharge it and present us with the finished product once it's complete. At that point, we'll hit the dyno, the track and the street for a full evaluation.

Gillespie has a few other tricks up his sleeve. For example, the D series and B series are closely related, insofar as engine-mounting points are concerned. So, wouldn't it be possible to fit a B series into an EM Civic?

If the smile on Gillespie's face means anything, it's that we'll have the answer to that question soon enough.

Heart of the Beast
Photo / 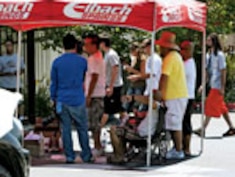 Overview of the all-Honda Eibach meet in Corona California and guide on how to best plan your own Honda meet or cruise without attracting too many cops. - Honda Tuning Magazine 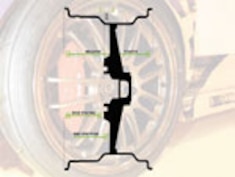 Wheel Offset: Why It Matters

Understand wheel offset once and for all. Learn all the specifics of positive and negative offset, track width and scrub radius and how they affect the handling of your FWD or RWD car. - Honda Tuning Magazine

John Rodriguez shows you how to swap the rear disc brakes from an EP3 to a 7th generation Civic. Pictures and procedure only from Honda Tuning Magazine. 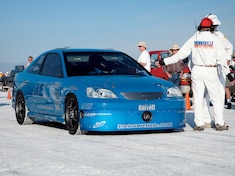 The AEM 2001 Honda Civic LX attempts to break another record at the Bonneville Salt Flats. We take a look at how they deal with heat management. See it here at Honda Tuning Magazine. 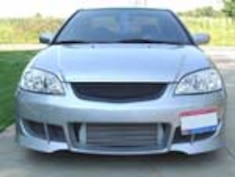 Check out this Plugged Parts Review that we have on the Turbo Kit for 2001 Honda Civic 1.7 D17, brought to you by Super Street Magazine. 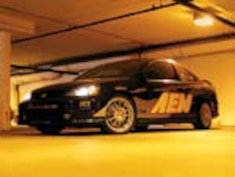 Read this technical article by Honda Tuning magazine about how to build an AEM 2001 Honda Civic LX that will streak across the Bonneville Salt Flats to world-record speed.

Read this technical article by Honda Tuning magazine about a Nitrous Express NOS system in a 2001 Honda Civic EX Coupe.