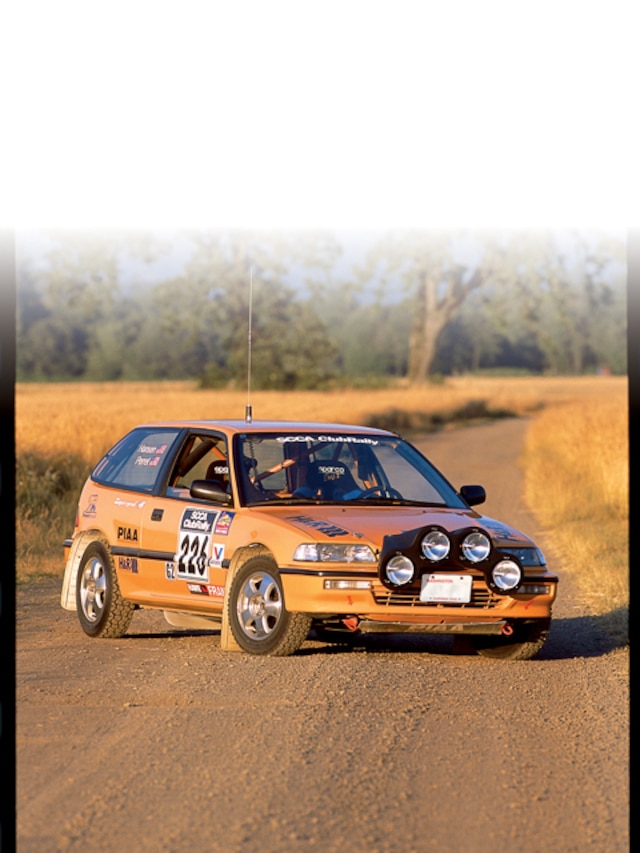 There are things in life that aren't supposed to mix. Oil and water comes to mind. Inexpensive and Ferraris. How about Hondas and rallying? A Civic? No frickin' way, man. They're more suited to your typical street, drag, or road racing venues. Which is why Steve Perret's old-school, low-budget Civic draws so much attention in Northwest Division SCCA rally events.

Steve is the general manager of H&R Springs and a factory-trained Honda tech who's been known to build some outstanding cars, including "dabbling in performance-tuned Cosworth Escorts." He'd never tried rallying before, sticking mainly to paved venues with his rigs. In 2003, he was looking for a change and wanted to go off-road without breaking the bank.

When Steve first considered rallying, he knew he wanted to drive a Civic. His friends told him he should stick to something European, because, after all, that's where rallying got its start. They also said the Civic was too fragile to take on the European competition. Bullshit, Steve thought. If built right, Hondas can be bulletproof, and he's proven it. 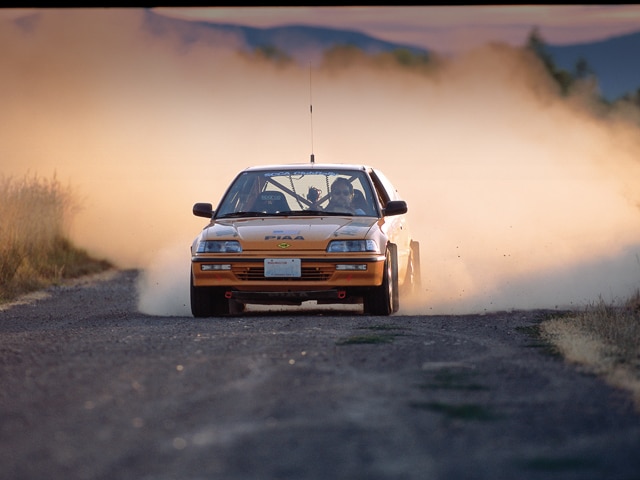 "As a Honda junkie since way before they were popular, the Civic made total sense to me. There are very few Hondas rallying and I really wanted to prove that it could be a competitive car," Steve says. "This generation of Civic is light, has a great wheelbase for rallying, and I was already comfortable with 'em as I owned one new and had spent many miles throwing it around."

The whole car was built according to the mantra: "To finish first, first you must finish." Instead of starting with a beat-up street car, he made a smart move and bought a 1990 Civic Si rolling chassis ex-drag car. No muss. No fuss. It was already stripped. 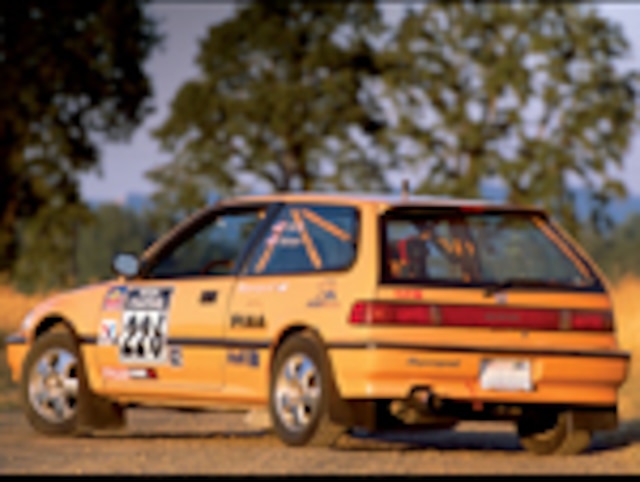 Priority one was a stiff platform. The body was seam-welded for strength and, for even more strength and safety, a heavily reinforced roll cage by Cascade Autosport was installed. But even with such an extensive cage, Steve says the Civic's roomy cabin makes it possible to "still have room to move around inside." When the body was done, the sunroof was filled for safety purposes and the car was slathered with yellow paint.

Then it was time to attack the mechanicals. No fancy VTEC power here, but a simple, torquey B18B1 out of an Acura Integra LS. Besides a solid rebuild, the only tweaks made were an open-element air filter and a Supersprint exhaust system with a header, piping, high-flow cats, resonator and muffler. The 142 dyno-proven hp is controlled with a '91 Integra ECU and Holley performance fuel pump. Where's the trick? No tricks, just longevity and ease of maintenance. 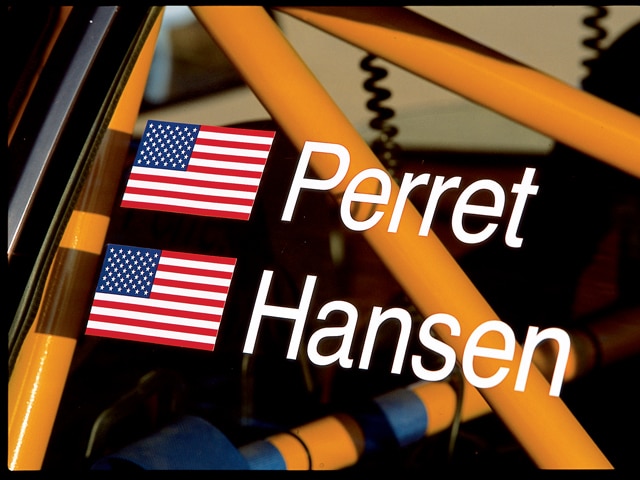 "The powertrain is basic, so all parts are easy to get at a local shop if they're needed," Steve says. "The reason for the O.E. ECU is to keep revs down in a manageable range for wheel spin. It also keeps the fuel management simple--no need to have complicated adjustments for different elevations or have the possibility of lean run problems burning up the motor."

A lightened flywheel and Centerforce II clutch sends power to an Integra five-speed, chosen because of its rally-friendly gear ratios and final drive. Where it gets strange is the following component, a welded JDM diff. Why, you ask? "The welded diff was done as a cost-cutting idea," says Steve. "I figured if I didn't like it, I wasn't out any money." As it turns out, the welded diff excels in gravel, making the car very predictable without annoying corner push. He also points out that if he breaks one of his Raxles custom CV axles, he can still make it back to service, something not possible with a Torsen-style diff. Of course, a welded diff isn't good for street driving, so Steve keeps that to a minimum.

Steve carefully chose his suspension components for durability and cost savings--a Place Racing front cross member for stiffness, Mugen bushings all around and, of course, the obligatory H&Rs. In front are a set of H&R coil-overs at a 285-lb/in. spring rate, and out back are H&R height/damping adjustable shocks with a set of 285-lb/in. springs as well. This combo provides excellent balanced handling with the controllability and predictability necessary in rallying.

Braking power needed to be addressed next, lest Steve hit a tree or fly off a cliff. He tried first running with a set of O.E. pads and cross-drilled rotors, but they overheated and faded badly. Soon he upgraded with a set of Powerslot/ Frozen rotors on the front, Integra disc brakes on the back and Hawk HP pads all around.

"Once I installed the Powerslot/Frozen rotors with the Hawk HP Plus combination, the car's braking was outstanding," Steve says. "During the Mount Hood ClubRally, we came into the time control at the end of a very fast 10-mile downhill run and the brakes never gave me any issues. But they were smoking quite a bit." He also reports outstanding feel and response.

Covering the brakes is a set of 14x7 Honda del Sol wheels with H&R 20mm wheel spacers and 185/65 Kumho R700 Hard tires--a strong and virtually indestructible combination.Inside is a rally lover's dream. A custom dash houses a full complement of Auto Meter Lunar gauges to keep tabs on the engine. Sparco seats and six-point belts keep Steve and his navigator planted while going sideways at insane speeds, and Steve grabs a Sparco 215 suede steering wheel while he attempts to control the Civic.

To make sure he's got the time and distance thing down, he's installed a TerraTrip 303 Plus speedo-odo-timing device. The unit is programmable to adjust for wheel spin, tire diameter and pickup points. It feeds off of the trans speed sensor for durability purposes, rather than the more traditional wheel area mounting. A TerraPhone Pro Plus, with speakers and microphones mounted in their helmets, ensures that Steve can actually hear his navigator shout out the route over the gravel pinging the underside of the car.

Lighting up Steve's way are PIAA Super White bulbs in the stock headlights, augmented by an EVO VII PIAA light pod and PIAA 80 PRO XT series fog and driving lamps. Steve hasn't gotten lost yet with that combination.The results? In his first season of rallying, he placed second in the NORPAC division for Group 2 (a class for two-wheel-drive cars without forced induction and a maximum engine displacement of 2000cc for four valves per cylinder) and second in the NW Division in Class 3 (the novice driver class for the NW region). He also received the first-ever NW Division Rookie of the Year award and an invite to compete in the National ClubRally Championships in Salem, Mo.

Not bad, but how does the Civic stack up against those so-called "real" rally cars? In the Mount Hood ClubRally, Steve posted three top three and two top two overall stage times against Open Class all-wheel-drive cars, including WRXs and EVOs. Not bad for a total investment in the neighborhood of 10 grand.Guess Hondas and rallying do mix. Now we've got to do something about oil and water.