Honda's unlikely V8 domination is happening not on America's streets and highways, but in professional open-wheel racing. We visit Honda Performance Development, the hub of Honda's U.S. race engine program, and the biggest reason they've been so hard to to 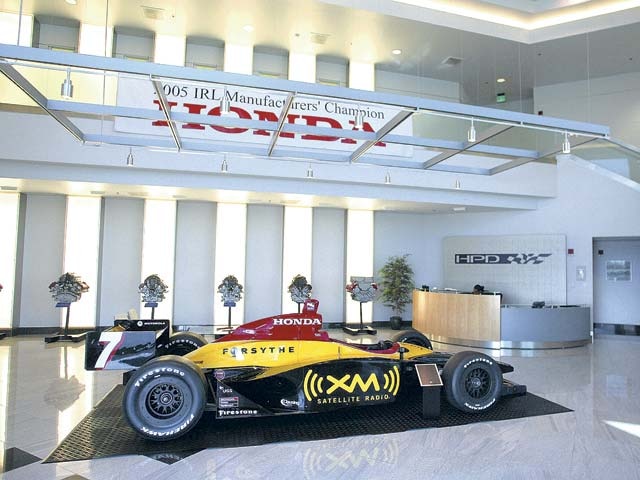 Somewhat fittingly, the new Honda Performance Development (HPD) facility sits atop a big hill in Santa Clarita, CA. The location, about a half hour north of Los Angeles, seems an apt place for such a successful outfit. Honda has provided engines for six manufacturers' championships in the last ten years, including back-to-back titles in both Champ Car and Indy Racing League series. Amassing a total of over 90 victories in that timeframe, HPD's new home up high suits its dominance.

A subsidiary of American Honda Motor Company, HPD began as and continues today, to be the technical operations center for Honda's professional American race efforts. The original HPD, which opened it's doors in April 1993 to support Honda's CART engine program, was headquartered just a few miles away from the new shop in a 43,500 sq. ft. building. Currently, the program focuses on motors for the IRL Indy Car series, and recently moved into a 123,000 sq. ft., two-story facility. And for the first time ever, HPD hosted an open house for members of the media this past October.

The engineers and builders at HPD most recently designed and produced the HI5R series Indy V8 power plant, the motor found in all Honda powered IRL cars in 2005, that earned the company its latest manufacturers' title. Developed in part with Ilmor Engineering, the 3-liter, naturally aspirated motor features forged aluminum pistons, twin cams over each bank, a dry sump oil system, and engine management by Motorola. In addition to engineering and assembling every HI5R, HPD also provided trackside support for each power unit they produced.

Racing is ingrained in the corporate culture of Honda, and in no place is this more evident than at HPD. Clarke and his crew carry on the spirit established by Soichiro Honda, who believed that competition, at the highest levels, was a means of improving the company, its people, and its products. He viewed racing as an ideal training ground for engineers and designers, and recognized that it teaches teamwork. Today, HPD pursues those same ideals in American open-wheel motor sports. The pursuit has delivered victory time and time again, placing Honda and HPD among racing's engine building elite.

Honda Tuning
Saying Goodbye to the Lexus GS F (Until We Can Afford One...)
After more than 30 years and four generations, it's finally time to say sayonara to the once-popular, midsize luxury sedan, known as the Lexus GS.
Sam Du – Sep 24, 2020

Honda Tuning
Cute & Smart: 2020 Honda e is a Modern EV Version of the Original Civic
Ever since the late '80s, Honda has dabbled in electrified vehicles, but the 2020 Honda e—their all new, fully electric offering—is a deep dive into increasingly crowded EV waters.
Rodrez – Sep 24, 2020