A Corrado Smokin' The Rear Tires! What's Wrong With This Picture? Nothing, Of Course

If Volkswagen ever produced a car with sporty styling to back up serious performance, the Corrado SLC is it; the VR6-powered SLC was designed with the muscular yet refined look of a classic German sports car and few would argue that it doesn't look just as fresh and distinctive now as it did almost 20 years ago. 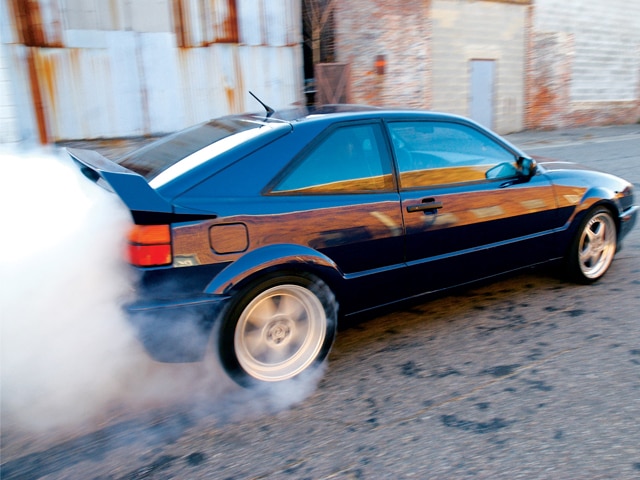 The only real problem with the Corrado is it was based on a front-wheel drive Golf platform, which was less than ideal for 911-conquering power.

Richard Hawse, a lifetime VW enthusiast, is no stranger to the traction problems associated with the FWD VW chassis: "I started with a Rabbit 16v, I did a Mk2 with header and cams, I got a Mk3 GTI VR6 and turbocharged it - it's been nothing but front-wheel drive VWs since I was 15 years old," Richard remembered.

After working for a number of years at Maryland-based EIP Tuning, he became familiar with experimentation on Syncro systems and realized the disadvantages. The solution Richard came up with was unique in its conception and the quality of the conversion, and groundbreaking in the world of high-performance VWs. The idea was hatched many years ago at EIP, but Richard only recently made his vision a reality. 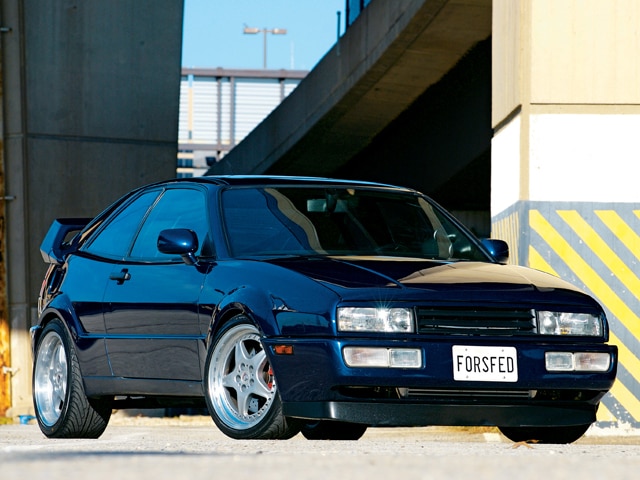 "A friend of mine, Bob Baker, had a Chrysler Conquest that ran 10.40s. I loved the power and 60ft times the car made so I figured I could do the same to the Corrado using the same rear suspension.

"We measured the width of the Conquest and Corrado. They were similar so I wouldn't need to alter the track of the rear suspension, just put VW wheels on it," Richard explained.

However, it wasn't until he opened his own service shop, European Auto Care, that Richard started on the conversion. Knowing the rear end fitted, the next problem was what transmission to use. After much research he chose the five-speed BorgWarner T5 since it's common in cars like the Mustang, Camaro, 300ZX, etc.

"Once I got that in my head, the key question was how to get a T5 to mate up to a VR6 02A bellhousing. I machined a piece of aluminum that spaced the tranny off the bellhousing so everything lined up," he said.

The T5 was perfect because it's strong and plenty of parts are available for it. That was key because the built VR6 was making over 400hp. It featured EIP pistons, Cunningham chromoly rods, ARP hardware and a custom intake manifold with individual velocity stacks to compensate for runner length.

Boost is created by a Precision PT67 turbo, running through custom 2.5" aluminum piping and a 4" Garrett intercooler core before entering the 12v head.

Starting last winter, Richard began taking apart the perfectly good Corrado VR6 turbo and rebuilding every mechanical aspect. A front subframe was fabricated to move the 2.9 VR6 back, optimizing balance and handling. "There's only 0.5" between the firewall and the timing chain cover because I wanted the engine to sit as far back as possible without chopping up the firewall. It meant I could get the weight between the wheels to balance the car," he said.

While he was at it, Richard moved the front control arm mounts 1" forward to again maximize balance. Otherwise, the stock suspension and geometry was retained.

At the rear, another subframe was created to secure the Mitsubishi-based independent suspension, differential and axles. The process was complex and Richard resorted to hot rod techniques he'd learned from his father. "My father's been welding and building hot rods all his life - I was raised around this stuff," Richard said. "Getting everything to line up was difficult and I could have just welded things in place, but I did it old school, with string and levels and squares."

The brakes were upgraded to 12.3" Brembo drilled front rotors, matched to Hawk pads. Admittedly, these aren't on par with the car's performance, so more upgrades are planned.

A rare set of BBR three-piece wheels (17x8" front, 17x9" rear) were carried over from when the car was front-drive, and sit perfectly in the SLC fenders - this is one of the rare VW's where wider rear rubber is needed for performance rather than looks. Other than a European front spoiler, Rieger wing and some minor updates to lighting, the wheels are the only significant visual change.

The gas tank had to find a new location, so a custom fuel cell was installed. "It was handbuilt from sheet aluminum but I still use the factory fuel filler - you don't have to pop the trunk or anything," Richard said.

With so much power, a Clutchnet six-puck solid disc mates to a lightened EIP flywheel to ensure power gets to the ground. The transmission itself was also upgraded. "The stock gearbox is only capable of 330 lb/ft so there are some forged steel plate bearing covers inside to tighten it up. I also installed forged gears because they're cheap for the T5," he mentioned.

One of the keys to Richard's success was his ability to make the parts he needed; he owns a full range of fabrication equipment, including a Bridgeport three-axis mill. "I didn't have the ability to do balancing, though," Richard admitted. He contacted A1 Driveshaft and ordered a 3" chromoly driveshaft to mate the T5 to the Mitsubishi rear end.

At this point, his ambitious project was rounding third and heading for home plate, but fatigue set in. "I got burned out when I had to install some of the more complicated components. The pedal assemblies for the brake booster, clutch, slave and master cylinder had to be hand assembled and installed with pivot points. I just worked on the weekends rather than every day."

Once the car was road-worthy, Richard called on old friend Bill Schimmel to dyno tune the DTA Pro 8 stand-alone. "I felt comfortable tuning the car but wanted somebody around who'd worked with the engine management," Richard said. "Bill tuned the DTA and the car made 471hp and 443 lb/ft at the real wheels on 21psi, but now we're running around 27psi!"

With all this power and hard work (Richard estimates 500 hours of labor), it wouldn't count for much if the car didn't perform. "Most VWs understeer because they're nose-heavy, but this thing is nothing like that; you turn the wheel and it goes round a corner. It's effortless," he enthused. "It settles in really nice and gives good feedback about how much traction the front wheels have, and it hasn't failed me. I've pushed it to the point where I was starting to show white knuckles."

Having over 500hp in a car can bite you if you're not ready, but hunting Corvettes has allowed Richard to practice handling the power. "When it comes on boost, especially if you're playing with somebody in a roll-on, the car can get dangerous. But, I've got to the point where I know what the car is doing, how to feather it and how to keep it straight," Richard said.

When he's driving, a host of Auto Meter gauges keep Richard informed about engine conditions, while a chromoly six-point rollcage strengthens the chassis and increases safety. Other changes were limited to Schroth harnesses and a Momo wheel and knob.

A multi-stage boost and rev-limiter are controlled through the turn signal and high-beam stalks. When used with the line-locks on the e-brake, Richard can coax impressive burnouts from the Aqua blue Coupe.

Now the car's finished, he plans to take it to Waterfest and H2O International, then hit the track once brake upgrades are complete. "I wanted something that would blow peoples' minds. I'd thought about cutting up the car and wondered whether I should have started with a piece of crap, but now that it's done it was worth every second, every penny and every headache," he enthused. "It's 100 times more fun to drive!"