AWD Celica feared on racetracks and dragstrips across the UK. 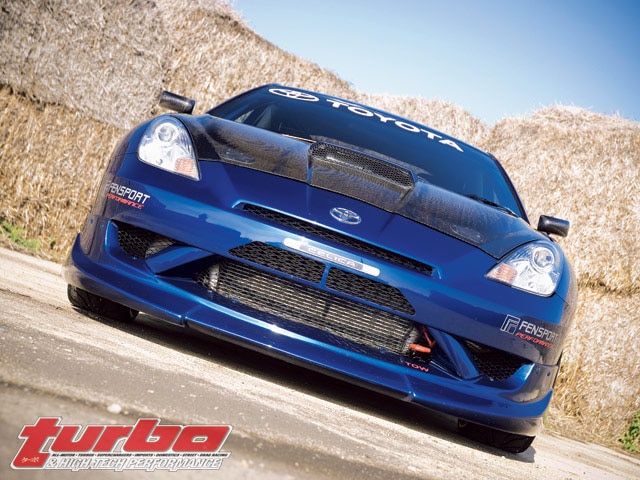 Question: What do you do when you've already built a 200mph/10-second quarter-mile Toyota Corolla AWD and want to better it with a new project car?

Answer: Convert a new Celica VVTi to AWD, add a 650 bhp engine and then take on the EVOs and Skylines and give them a run for their money.

That's exactly what Adrian Smith, the boss at Fensport, was doing during the 2006 season, both on Time Attack events and on the dragstrip. "I wanted to build a car for events such as TOTB when you do drag racing, top-speed runs and handling events all on the same day," Adrian revealed. 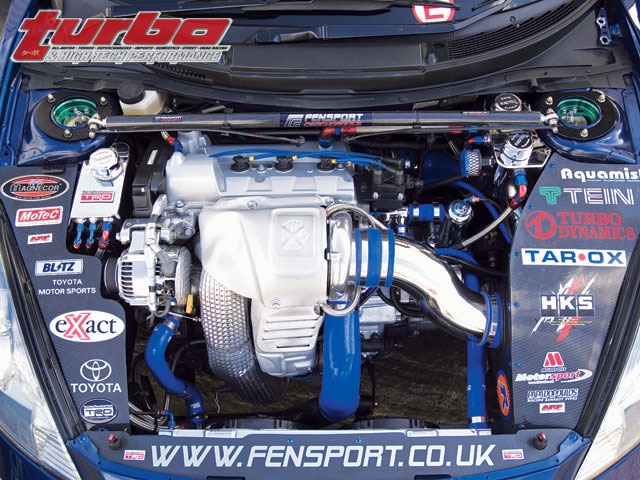 Impressed with his Corolla creation, Toyota UK helped Adrian get the ball rolling by donating a shell to the project, and not just any shell, a TRD-M-Sport shell, which comes complete with extra welding of the body seams. The fact that the car was originally AWD and only produced around 200 bhp didn't seem to put Adrian off at all; he likes a challenge. The plan was to construct a road-legal car, that would still look like a Celica (OK, he added a few carbon-fiber goodies, but can you blame him?) and one that was equally at home on the dragstrip as the racetrack - and of course more than capable of being competitive. Six months of hard work later and 50,000 pounds (nearly $100,000 U.S.) in parts alone and the new company car rolled out.

The first step was to strip the car and then work out what modifications were needed to house the engine and AWD running gear. Adrian remembers that getting the engine into the bay wasn't too much of a challenge, but that the transmission conversion required a lot more effort. Those changes included alterations to the floorpan to accept the driveshaft center mount, fabricating an exhaust tunnel and cutting out the spare wheelwell to provide space for the custom fuel system. When it came to the all-important power Adrian decided to stick with what he knew best and got the experts at John Edwards Motorsport to build him another version of the faithful engine, which powered his Corolla to glory during the previous season but with some important amendments. A lot of the engine spec is custom built and remains shrouded in secrecy, but some parts Adrian revealed. For instance, the turbo is a Garrett GT35/42 ball-bearing unit, which is combined with a HKS Supra intercooler. This huge intake pipe took two days alone to fabricate and undergo polishing. The oil breather and cooling system are also unique.

Despite all the work involved on this car, the engine bay still looks like it was produced in a factory. Some of the nice touches like the wiring loom hidden under the carbon-fiber panels are examples of the attention to detail that's involved in this project. Adrian points out that the engine block is at the limit of its capacity and only has walls of 3.5mm. Although he'd love to be able to run a 2.4 or even 2.5L engine like some of his rivals since the extra displacement would allow him to push more boost and reach 800 bhp figures, he doesn't have the space. This year, he plans to investigate and experiment with alternative turbo options, which combined with some additional cylinder head flowing should produce a bit more power to play with.

Keeping the engine under control is a Motec M4 Pro ECU that Adrian mapped on his local roads. He programmed it to handle everything possible including the water injection, launch control and full throttle gear changes. During the year, he's run the car at 2.2 bar of boost on the dragstrips, turning that down to 1.5 for his circuit activities.

Often with high-power drag cars the transmission is the weakest link, certainly in the early stages, and this car proved to be no exception. "We don't know anybody who has ever managed to break a GT4 driveshaft - and I've broken two this year," he said with a grin. However, that weak link seems to have been cured thanks to Fensport's own triple-plate clutch and extra-tough close-ratio straight-cut dog selector gearsets, the latter of which don't come cheap at 5,000 pounds a set - and Adrian's got a couple of spares, just in case no less.

Braking is more than taken care of by 10-pot calipers on the front to slow the 326mm rotors and a further 6-pot acting on the rear. Naturally, the brake balance is fully adjustable from inside the rollcage-protected cockpit while the driver is secured in his Recaro with a Schroth five-point harness.

A combination of Whiteline and Tein components take care of any handling issues. Despite on-going developments throughout the season, Adrian sees this area ripe for improvements. "Handling is OK up to about 80 mph," he said. "We are not sure if the problem is aerodynamics or the shocks, but we have struggled on several circuits." Since these photos were taken the car was fitted with AST 3-way adjustable suspension and Adrian is getting a new wing fabricated that he hopes will generate some extra downforce.

So did the six months of hard work pay off? How was the car on its debut event at Santa Pod dragstrip? "I was extremely pleased with how competitive it was straight out of the box," he replies. "We did an 11.1 run but we'd mounted the coil pack too close to the distributor and it caused interference, which made the ECU go mental above 7,000 rpm." They moved the coil the following day and added a carbon-fiber shield and on the following weekend the car ran a 10.6-second quarter-mile.

The car's first outing in Time Attack series was also a success as the Celica came home 5th overall - despite having up to 200 bhp less than some of his rivals such as the Norris Designs EVO IX. Best results of the season? He's notched up a couple of 4th places in the Time Attack, which just goes to prove that he's punching well above his weight. This year he's certain to be a front-runner.