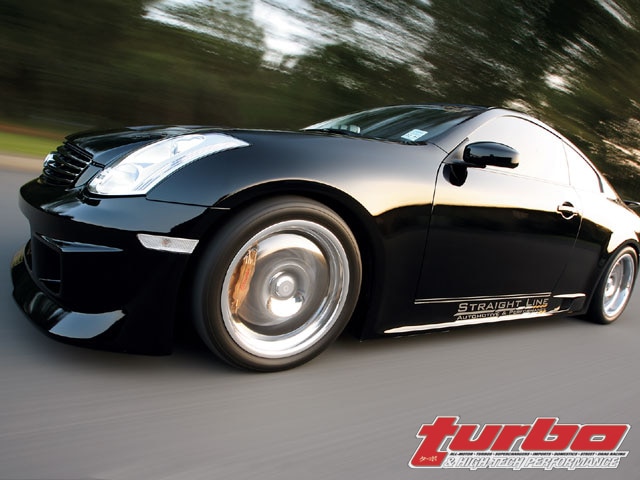 Perhaps it's the resulting speed and power or perhaps it's just the satisfaction gained when building something right and getting things done. Either way, Philip Petracca's '03 Infiniti G35 coupe is the manifestation of everything good about a well-built and fine-tuned twin-turbocharged import car that's sure to be a threat to rivals on and off the track.

The two most appealing facets about this project are its emphasis on building a scalable bottom-end and its meticulous top-end configuration. Everything else was done with the utmost regard to performance and perfection without an apparent cost consideration. Making the tale even more interesting is the long and difficult road traveled by Petracca due to the lack of early aftermarket support for the G35. As he put it, "This is no one else's molested project car." No stranger to motorsports, Petracca, who is also a world champion car audio competitor, secured the very first G35 coupe that landed at the local dealership in his central New Jersey hometown. Without regard to the warning signs, this project was off to a start. The obstacles that had to be overcome for making big power with the VQ platform were numerous, but for the most part on par with many mid-market production cars today. 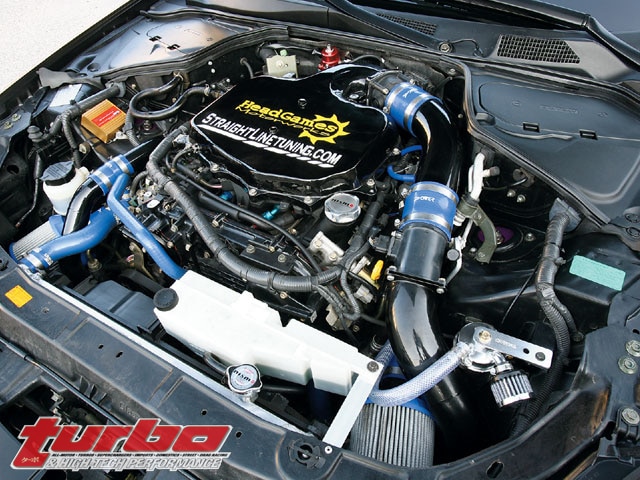 As an example, the OEM fuel system on the G35 is returnless, an increasingly common solution by manufacturers to keep gasoline from having to make several trips to the engine compartment before passing through the fuel injectors. The returnless system reduces fuel temperatures in the tank, causing a reduction in fuel vapors to make it more environmentally friendly. However, it relies heavily on the ECU to manage fuel pump output. Cooler fuel has its performance benefit, in that it cools the incoming air/fuel mixture and combustion chambers. These systems aren't compatible with aftermarket engine management units since they would add another layer of complexity in high-performance applications with relatively little benefit.

Money was better spent elsewhere, like on the Weston Machine installed Darton steel liners, Wiseco forged pistons and the Power Enterprise twin-turbo kit with Full-Race upgraded Garrett GT2871R medium-frame ball bearing turbochargers. The steel liners generally found in top fuel dragsters, Darton's largest market, serve as the foundation for safely making big power. Among the key benefits are less cylinder wall wear and better ring seal surface that eliminate leak down and reduce friction between the sleeve and the Wiseco 8.8:1 oversized forged pistons. Full-Race replaced the PE1420 IHI turbos supplied in the Power Enterprise kit with the Garrett turbochargers because the IHI turbos aren't capable of breaking the 550hp mark. The GT28 turbos feature larger turbine and compressor wheels contributing to the 726 hp and 645 lb-ft of torque at 19.5 psi on C16 fuel. When bolted to a 1.8L engine - and each bank of the VQ35DE is close to that - one GT2871R is capable of at least 280 hp at the flywheel, therefore in pairs the turbos should yield 560 hp. Based on dyno figures, this configuration is far more potent since it increases displacement-to-output efficiencies beyond what is probable, much closer to the 900+hp hypothetical maximum flywheel output capability of, say, a twin-turbocharged 6.0L engine. 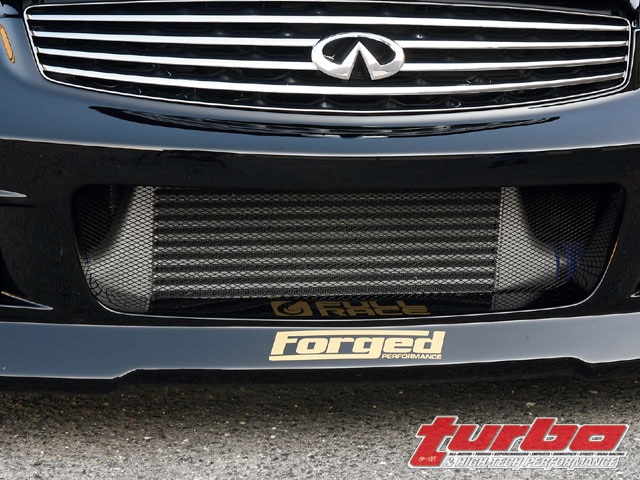 With dual turbochargers forcing air through the engine, significant modifications were necessary for the stock intake tract and cylinder head to handle the increased flow. The intake system, designed to provide air the path of least resistance, begins at the Power Enterprise Air Impulse II filter, where air enters the intake through the large front-mount intercooler, and moves to the Crawford raised plenum and the HeadGames Motorworks ported and polished heads. The Crawford plenum fixes many of the design tradeoffs inherent with the OEM part by increasing the plenum height around the number one and number four cylinders while still clearing the hood. By raising the plenum height, balanced airflow is achieved at each cylinder. Dave Localio at HeadGames outfitted the G35 cylinder heads with a number of goodies typically found in high-performance applications, like Ferrea valves, Jim Wolf Technology cams and Cometic headgaskets. ARP 0.5-inch head studs resolve the lifting issues in the cylinder that occurred past the 500hp mark - a congenital limitation of the stock VQ platform. The stock connecting rods and main studs were replaced with Pauter forged rods and ARP studs respectively.

The VQ35DE is also sensitive to backpressure, especially following such induction system modifications. Available aftermarket exhaust system options presented limitations around the 550hp mark, therefore something custom needed to be built. Don Zubritsky of Straightlinetuning.com rose to the challenge and pieced together a dual exhaust system that featured 3-inch stainless steel piping and Magnaflow race mufflers. 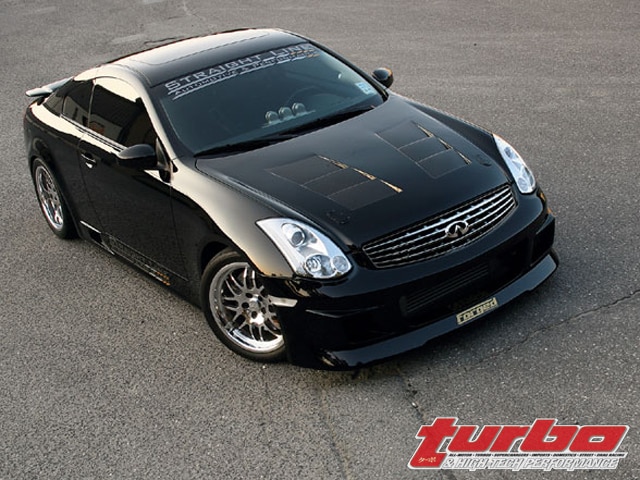 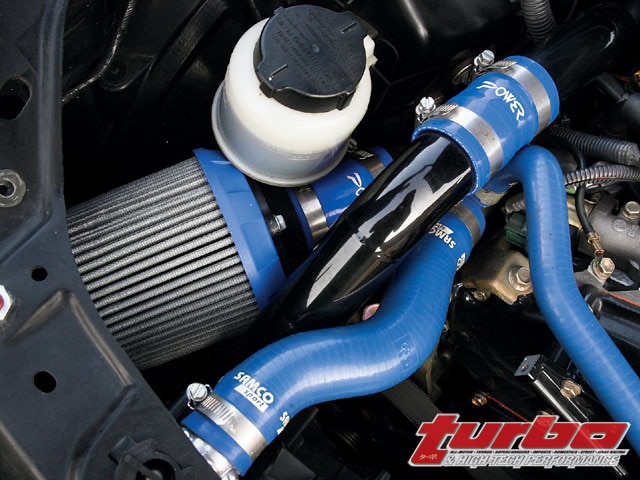 Engine lubrication and cooling also needed to be improved to handle the additional demands placed on the modified VQ. The large Power Enterprise oil pan increases oil holding capacities and reduces oil temperatures by allowing each Motul 300V synthetic oil particle to sit in the pan for a longer period of time and lose more heat before being pumped by a Rev-up oil pump to a Setrab 6 series 19-row oil cooler and back into service. Because elevated coolant temperatures became an issue with the high-output configuration, a Koyo race radiator along with a Nismo thermostat and Samco hoses add to the ever-expanding parts list.

Drivetrain and suspension modifications followed the engine buildup in order to transfer the enormous power output. A Carbonetics triple disc carbon clutch with a 1,350kg pressure plate connects the engine to the transmission and an ACPT carbon driveshaft links it to the Carbonetics limited-slip differential matched to a stock casing and Nismo differential cover, which introduces carbon discs instead of metal. The carbon discs have the same locking performance but milder transitional characteristics, which improves apex-point acceleration in road racing applications. From the differential, 900hp-rated Level 5 rear axles acquired through the Driveshaft Shop deliver power to the 18x11 CCW SP16A Nitto NT-01 315/30/18 wrapped rear wheels. The front 18x9.5 wheels are fitted with 275/35/18 tires of the same kind. Grip is aided by a cornucopia of parts, including the KW Competition three-way adjustable racing coilover suspension built to Robispec specification, 350EVO.com camber adjustable front control arms, Hotchkis anti-sway bars and SPC Performance rear suspension components.

Petracca's G35 modification list is extensive. Fortunately, the pictures speak for themselves. Given Petracca's successes in audio competition, this coupe is sure to keep that Jersey shore rockin'. 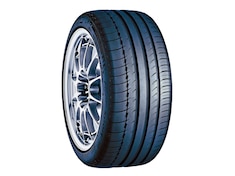 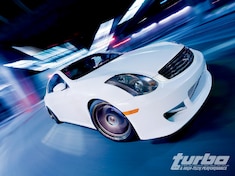 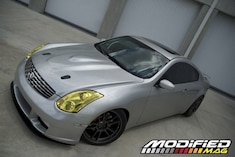