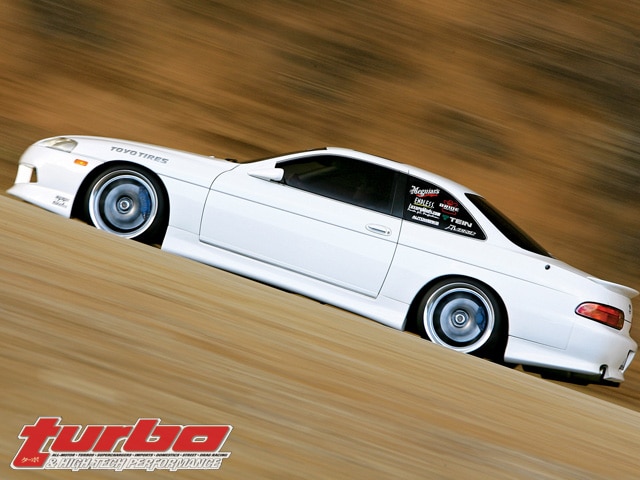 450WHP
The protocol's changed little. Got an S13 or S14 240? Bet an SR20's somewhere in the picture. How 'bout an EG Civic? Chances are good you won't find a single-cam D-series here. Or perhaps SC300s are your thing. Turbocharged 2JZs fit nicely in cases like these. Protocol is oft overrated.

Rejecting the status quo can leave little to desire. The fact is one can do a whole lot worse than KA24DEs, D16A Civic engines or non-turbocharged 2JZs. And if one were to take such an engine as, say, a non-turbocharged 2JZ-GE, taking cues from the likes of Kirby Wang's '92 SC300, who's to say protocol can't be rewritten? 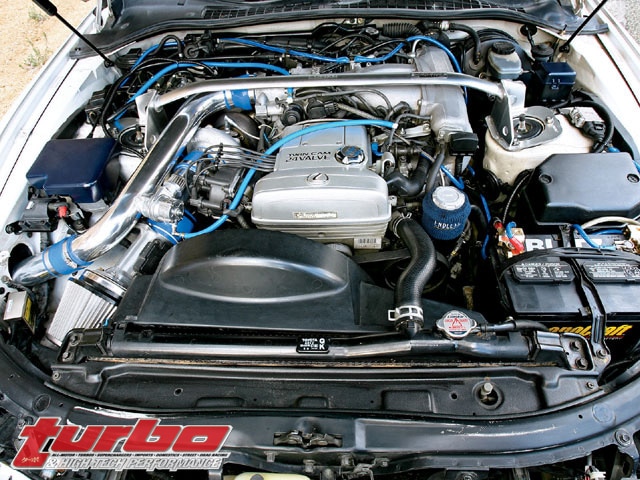 Generally speaking, first-generation SC300s aren't exactly rare; five-speed ones, on the other hand, are. And since a four-speed or more expensive five-speed, yet hardly better, automatic didn't fit into the scheme of things for Kirby, the final purchase consisted of months worth of waiting and a several-hundred-mile drive when it came time to take delivery. It's unlikely most would quibble over such things though, considering finding the perfect chassis to start with only makes later improvements all the easier. The SC300 purchase meant Kirby could now fit the predictably predictable puzzle pieces together-find a wrecking yard 2JZ-GTE and bolt that twin-turbocharged sucker into place. But that just isn't how the story goes. 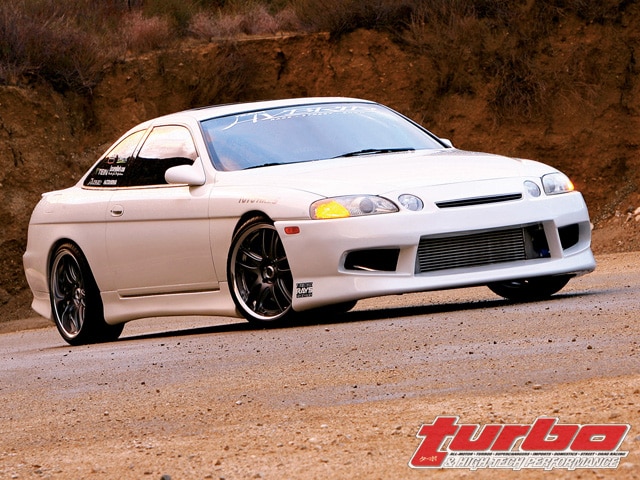 The dilemma was as follows: spend beaucoup bucks sourcing and installing a twin-turbo 2JZ underhood or make due with its non-turbo counterpart, which, of course, was already right under Kirby's nose. Skipping such an engine swap meant turbo 2JZ funds could be allocated elsewhere, like outfitting the once naturally aspirated 2JZ-GE Kirby's way-a way in which revolved around a single turbocharger, 20 pounds of boost and 450-plus whp. Kirby's rationale? His 2JZ had relatively low miles and, simply put, he wanted to see what he could coax out of it. Such power figures are generated with the help of a slightly altered Boost Logic turbo kit. The kit's based off of a dual ball bearing T67 turbocharger but is augmented with a slightly larger Skyline intercooler sourced from XS Engineering. Boost Logic's SC300 and naturally aspirated Supra MKIV turbo kit consists of a stainless steel, tubular exhaust manifold with 1 51/48-inch primaries and a footprint sized to fit turbochargers as large as the T76. An HKS 40mm external wastegate and a series of downpipes, midpipes, intake pipes and intercooler plumbing-all polished-is also included. After bolting in the supplied Walbro fuel pump, Kirby could have called it a day. He didn't. 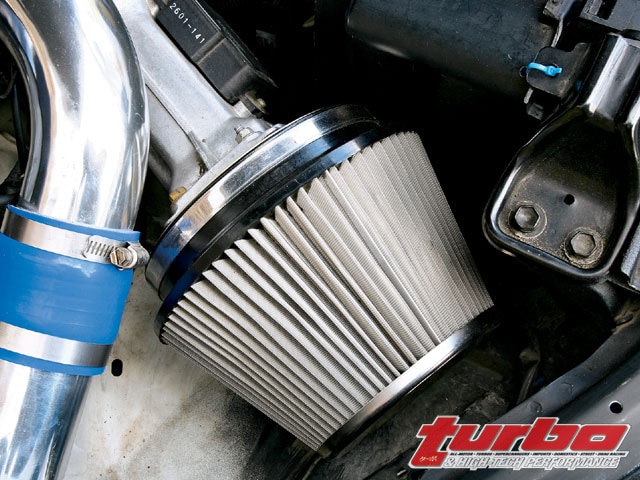 As good as the Boost Logic Stage I turbo kit is, Kirby and the Lexus specialists at Dynamic Auto made it better. They took hints from the company's Stage II kit, installing a thicker 2.5mm headgasket paired with ARP head studs and larger 550cc/min fuel injectors that pressurize the rail with the help of an HKS fuel pressure regulator. Internals were left alone, with the bulk of hard labor-aside from pulling the head-consisting of a Power Enterprise timing belt install and ACT clutch upgrade. The rest of the now-turbo 2JZ's modifications read like an advertisement straight from the Blitz marketing guys' mouths; Blitz paraphernalia includes the company's blow-off valve and air filter, Nr-Spec exhaust and a host of electronics including an SBC I-D III boost controller, meters and gauges galore as well as a FATT DC IV turbo timer. Stones are all unturned and temperatures cooled down with the help of a GReddy oil cooler and that, friends, is just what's under the hood.

But a well-rounded car means massages everywhere-paying attention to details that often have little to do with fun things like horsepower and torque. Holding back in terms of stopping and handling prowess, Kirby did not do. Only one word can describe this SC300's brakes: Endless; and that's the company, not the adjective. Six-piston calipers and pads from the Japanese braking company clamp down to small wheel-sized 13-inch rotors up front but the back's more of an OEM/Endless affair, where twin-turbo Supra calipers meet with a set of Endless pads and rotors, also of twin-turbo Supra heritage. Endless brake lines push the Motul fluid through the system, giving Kirby that firm pedal feel to go with his new overkill-stopping wherewithal. Of course, we can't forget about the suspension, which remains simple, yet effective. Simple in that all that was added were Tein HA coilovers along with a Daizen camber correction kit and Carbing front strut tower brace-effective in that, really, that's just what the SC300 was asking for. But everyone knows the buck stops with wheels and tires when it comes to stopping and turning. Volk Racing GT-V draped in Toyo T1s handle the buck appropriately.

Rambling on in terms of Kirby's SC300 and all that's entailed in making it go, stop and turn is easy but the truth is Kirby wanted his introductory SC to appeal to the eyes in the very way it gets the blood pumping when strapped in the driver's seat. We believe his very words were: "to build a show car with both the looks and speed to kill." Fair enough. Kreative Auto Interior got to work with needle and thread, ditching the original tan leather interior and instead bolting and fitting Bride Ergo II seats and fabric into place along with matching accoutrements for the rear, long before horsepower was addressed. The Authentic Origin body kit, Bomex mirrors and a color change carried out by the people at AutoWerks Paint and Body in '06 SC430 fashion with a hint of gold pearl followed suit. One could very well see to leaving things alone at this point, but not Kirby. Enough audio gear was outfitted to his SC to warrant an entirely different discussion and we haven't even mentioned all the extra bits like the Veilside steering wheel and shift knob, Takata harnesses, Razo pedals ... one could go on.

The details of Kirby's build and all he's accomplished with the once-naturally aspirated 2JZ of all engines is enough to make even non-turbo 2JZ naysayers figuratively choke on a couple of turbos. Almost. That was before we found out Kirby already has plans in the works to swap his current powertrain for something of the 2JZ-GTE variety. Perhaps protocol does have an upside.

Alex Pfeiffer is known as a bit of a fabricator (or should that be pfabricator?) and we can see his handiwork inside Battle Version's 1994 Lexus SC300. Read more on this 650 HP slide ride here at Import Tuner Magazine. 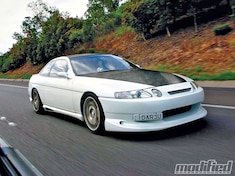 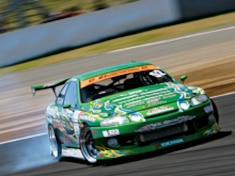