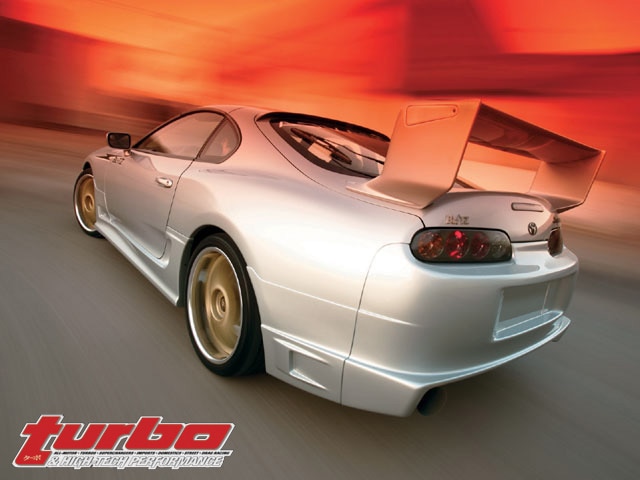 The worldwide popularity of the Toyota Supra isn't a matter of perspective, but a well-known fact among car collectors and casual enthusiasts. The fourth-generation Supra was undoubtedly one of the most well-rounded sports cars that hard-earned money could buy-until Toyota executives decided to retire the mold following the '98 model year. Since then, the car has only become more popular. Finding a low-mileage, collectable-quality survivor after an almost 10-year lull is becoming nearly impossible. Coming across Ted Nguyen's exceptional '97 Blitz-optioned MKIV Turbo is then, at the very least, cause for a double take.

950whpThe 950bhp Supra we speak of with such top-of-the-line modifications is, simply, astounding. Paying homage to the right-hand-drive Blitz Supra, which in 1998 set the fastest road legal production car lap time of 7 minutes and 49 seconds around the world famous 12.92-mile Nrburgring in Germany, this modified special edition European model has a rich history and more power than the record-breaking original. 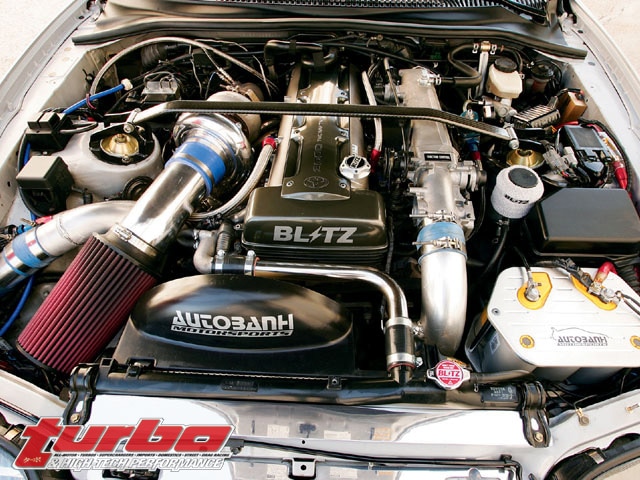 Ted, who calls Texas home, has idolized the 606bhp record-breaking Blitz Supra like many other devoted fans. After months of searching he finally found the perfect candidate for some voodoo magic with only 30K miles on the odometer. Brought into the U.S. from Canada, the car is one of 69 extremely rare 15th anniversary six-speed, twin-turbo, Alpine Silver, targa top editions manufactured in 1997 for worldwide distribution. Importing and certifying the car for street use wasn't easy, but with the hired help of an importer the car was given Texas plates. Ted's ultimate goal to resurrect the legendary Blitz Supra was quickly becoming a reality.

Ted invested more than $126,000 into this project over the last two years, using only the best equipment and highly acclaimed professional labor. Primarily relying on Blitz performance parts, he modified the powertrain, suspension, body and interior to maximize everything that a Supra has to offer in terms of both power and style. 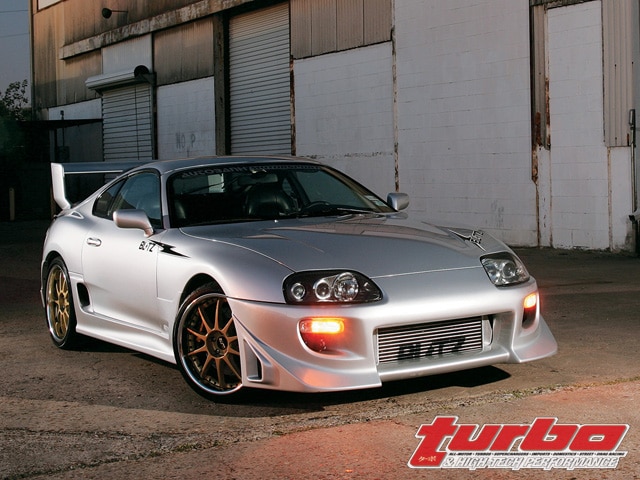 The sequential twin turbochargers, which were part of the original equipment with the 2JZ-GTE 3.0L six-cylinder powerplant, were replaced as part of the Blitz turbo kit installation. But this only served as an intermediate setup for Ted as he soon decided to upgrade to a larger Precision Turbo PTE 71GTQ medium-frame turbocharger. The Blitz turbo was a bit conservative with the dyno reading roughly 460 whp. It's well-known that the 2JZ platform is capable of handling more than three times the original power rating of 320 bhp, especially when built by Autobanh Motorsports. The larger turbo is based on the Garrett GT2871R ball bearing CHRA, but its turbine and compressor housings have different flow characteristics that facilitate big power for people who want to drive fast cars. The PTE turbine is optioned with a .86 A/R housing. Because the A/R ratio is used to adjust the flow capacity of the turbine, this size increase effectively reduces exhaust gas velocity, especially at lower engine speeds, resulting in a slight increase in turbo lag, but improves top-end power as backpressure is reduced and the engine's allowed to breathe. A massive 60mm HKS GT wastegate provides full resistance against the excessive pressure produced during high boost. These upgrades are a must for big power, but are most beneficial in time attack and road racing applications.

Elsewhere, the induction system is still of the Blitz design. The Blitz front-mount intercooler provides maximum cooling capacity and a minimum pressure drop of only 0.7 psi for every 17 psi of boost. A good intercooler is essential because in the process of turning out 950 whp the turbine is superheated producing high-temperature, reduced-density, compressed air that needs to be cooled drastically to eliminate power robbing and potentially damaging pre-ignition.

High-octane fuel delivery to the six 1,000cc RC Engineering injectors, which provide low-impedance connectivity to the AEM standalone ECU, is secured by an Autobanh fuel rail and XRP aluminum fittings coupled to braided stainless steel lines. The fuel system is pressurized by dual high-volume GSS341 Walbro fuel pumps. These pumps are pretty much standard issue for high-output applications, much like the Aeromotive fuel pressure regulator.

A Blitz exhaust manifold ensures that the leftovers leave the combustion chamber promptly and enter the turbine housing with the same efficiency. On the opposite side of the vortex, a Blitz Nr-Spec Race exhaust system awaits to set free the smoldering hydrocarbons so precisely burned by the HKS Twin Power ignition amplifier. In addition to providing maximum voltage output by incessantly monitoring the ignition coil, the unit also improves throttle response and maximum power output with its dual circuitry, which combines the capacitor discharge ignition and transistor ignition methods for short bursts of maximum voltage and extended spark duration.

In an effort to meet the demands of the powertrain, the driveline was outfitted with a six-speed SP-63 Getrag gearbox from the factory. A Blitz active twin-disc clutch, lightweight flywheel and C's short shifter were added to handle the additional power.

To the casual observer, however, the only visible sign of any modification is the stylish Blitz shift knob complementing the interior.

The immaculate interior sports a few upgrades as well. The Blitz i-Color LCD electronic boost controller that can be toggled between 12 data displays such as boost, tachometer, vehicle speed, oil/water temperatures and fuel/oil pressures, keeps the driver informed about the various systems. It is even equipped with a programmable sequential shift light system that prompts the driver to shift at the optimal time.

The Supra's exterior was outfitted with original Blitz body components, including front bumper, side skirts, rear skirt, rear spoiler and authentic Blitz vinyl decals and emblems. The wheels mimic the original Blitz Supra with 19-inch Blitz Technospeed Z1 rims and Bridgestone Potenza S03 Max Performance summer tires. These tires use F1 advanced compound technology to deliver driveability in wet and dry weather. Front and rear sizing is 245/35/19R and 285/30/19R, respectively. The forged three-piece gold and silver Technospeed Z1s in the 19x8 and 19x10 variety are tough to source as most dealers won't stock them and the trip from Japan can take up to eight weeks.

When the work was called off the legend was reborn. Stronger than before, the Blitz Supra has returned for another day on the track and another hour in the spotlight.