We get an update on David Mazzei's absolutely rowdy Mazda RX-7. 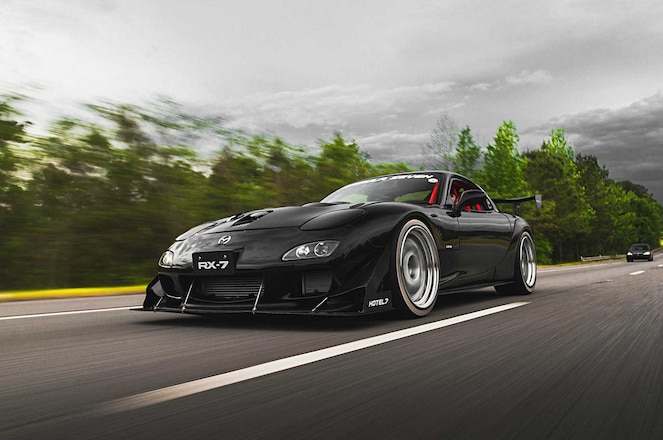 If the above video of David Mazzei's 4-rotor Mazda RX-7 on the dyno doesn't make you cry a little with sheer car-enthusiast joy, we may have to revoke your club membership. A lot of people have watched the bucking, screaming, fire spitting FD3S in the last few weeks after it got shared a gazillion times across social media, but the savvy Super Street follower knows this car from its 2017 feature we commissioned from writer Aaron Bonk and photographer Cade Garrett. Since that story, the project has seen some major updates, and David was awesome enough to fill us in on the changes.

The 4-rotor engine was rebuilt by Eccentric Motorsports from Indiana with machine work by Chip Ursu. They rebalanced the rotating assembly, reworked the keyways on the crank, fixed coolant leaks in the peripheral ports, and changed apex seal brands. The power plant's oil system was upgraded, turbocharger upgraded from a BorgWarner S483 to a Garrett GTX55, and a new manifold was fabricated with larger runners.

In our story, the car was said to be making 800 rear wheel horsepower; Mazzei reports you can now put his FD3S in the 1,000hp Club. It made 1k at the rears at 17psi of boost pressure and on E85 fuel, and he believes it's capable of 1,300 to 1,400hp at 30 to 40 psi. In the video everyone's talking about, the pull was at 15 psi (he also sent over a video of testing out the Geartronics/Quaife setup with the 4-rotor on just 8psi of boost).

You can now watch the entire tuning adventure for David Mazzei's beastly RX-7—including more dyno footage—on YouTube. Make sure to subscribe to his channel and also check out his Instagram—@Mazzei_Formula—for more about this crazy 4-rotor FD3S build.