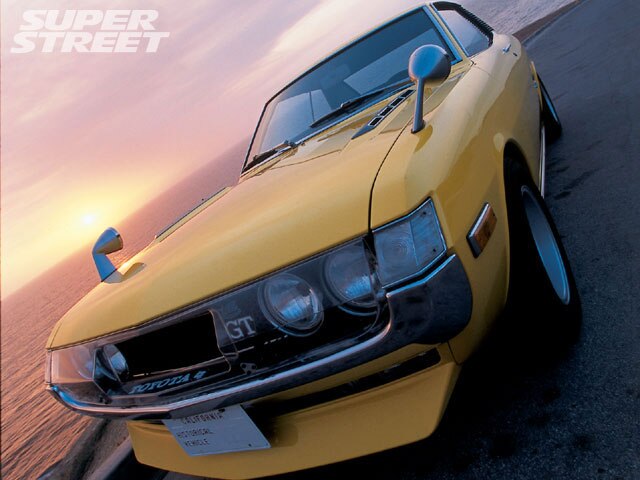 I love toys. There is no doubt when looking at the boxes of my playpen that I do. Everything from radio-controlled gizmos that buzz in the palm of my hand to every type of 1:18 scale die-cast you could imagine. And as you would probably figure, my playpen is a complete mess. However, it's a good mess-if there is such a thing-because clutter is the sign of genius. If my playpen is the sign of my genius then elephants are teaching pigs how to fly. Pass me the MENSA test Einstein, I'm ready.

However, there is one man who loves toys as much, if not more, than I do. Not necessarily the small pocket kinds of toys (though he has his share of those as well), we're talking "Toy"otas. Joji Luz spends his days toiling away at the Advanced Engine Management (AEM) facility pushing parts and keeping the company running (at least that's what he told us) but when quitting time comes close, Joji's mind fills with thoughts of the drive home in the immaculate '71 Toyota Celica you see here on these pages. Now this is only one of a collection of cars that he possesses, but it is one of the cleanest. Being the fifth car to roll off the assembly line as a left-hand drive (VIN #000005) and the very first Celica in the U.S., he is trying to keep it that way. Looking at the car you notice that there isn't a flaw in the paint, not a wrinkle in the sheetmetal, not a speck of dirt anywhere there shouldn't be (Just where should dirt be?-RC). One would swear that this car has never left the showroom, let alone the fact that the car is older than most of you reading this story right now. From years of searching for parts and lots of phone calls to TRD, the exterior sports the full Japanese look. The bright yellow paint contrasts nicely with the sinister look of the front end with its Cibie lighting system and TRD JDM headlight covers and front spoiler. Rising up off the sides of the hood like ears are a pair of fender mirrors straight from the Toyota of Japan parts bin. Joji just said "no" to trying to fit 26-inch bling-bling rims on this piece of rolling art. In fact, he has gone the opposite route with a set of 13-inch Minilite magnesium wheels front and rear, wrapped in Yokohama rubber. Though the wheels are small, the wheel wells are still full because the car rides lower than stock thanks to TRD lowering springs and race shocks. OEM GT trim, in the guise of mouldings, lights, and emblems was added as a final touch.

Underneath the front-hinged hood lies a living, breathing testament to all things TRD. Everything that could be done to the Japanese dry sump 2TG motor was. The engine was given the full race treatment with a balancing, blueprinting, porting and polishing session. Even the block was modified with the installation of oil squirters to cool the pistons. Toyota Racing Development supplied all of the internals, and I mean all. From the racing camshafts to the fuel pump, I don't think there is anything left that is still from the factory as the list of parts that were used reads like a TRD catalog. All these pieces combine harmoniously to make enough power to get this yellow oldster moving with rocket quickness. The car breaths deep through Solex twin 50mm racing carburetors, and exhales through a blue coated TRD header. The car produces a melodious hum from the TRD exhaust, which is a pleasant alternative to the mass of angry motorists we are so used to hearing on the streets of L.A.

The interior is immaculate as well, a shrine to the conventions of functionality. A pair of black TRD Racing buckets graces the interior with matching Simpson harnesses to hold driver and passenger in place. Custom seatbelt mounts were put in to make sure that everything stays nice and secure. More TRD product makes its way into the interior space in the form of a tachometer, oil pressure gauge, and water and oil temperature gauges while the rear of the car was finished off in sheet aluminum for a clean, purposeful race look.

It must be nice to be able to spend time and money on a real toy collection like this, let alone maintain it. However, if I could add up all the doughnuts I've spent on my own personal fetishes I figure I could have afforded one or two of these drivable "toys" as well. Oh well, maybe in my next lifetime.

Props Brad Nelson (previous owner) for trusting me with this treasure, and Joel Luz, my brother, for opening the doors.