The answer to why you still don't have a best-of-show trophy.

Yes, yes, yes. No. Despite what you may think, those aren't excerpts taken from the night Kobe Bryant flushed down his once-respectable image by dropping his Denver Nuggets on an unsuspecting white chick. They are, however, answers to the questions you asked yourself after you stumbled across this page. Yes, this is one of the sweetest and most unique 1ZZ Celicas you'll ever see. Yes, it does sport lambo doors, just in case you thought you were seeing things--again. Yes, this is the first time since the Clinton administration that we've put a Celica on the cover. And, no, you may not give the exhaust tip a rim job.

If more questions happen to arise, such as what the heck?, how did they fabricate that?, how fast does it go?, and why does it burn when I pee?, you're not alone. These were the exact same questions I was faced with when I first came across this car at the NOPI Nationals. Fortunately, owner Peter Colello, a second-year student at Temple University in Philadelphia, gratefully answered all of them, though he still doesn't know why it burns when I pee.

Peter and I also discussed the story behind his grand creation, citing that his addiction to tuning the Celica began after merely installing some small modifications. "I purchased the car in April of 2002," explains Peter. "I began to modify it immediately thereafter, which led to my taking a job so I could afford larger modifications, and this is the end result." In between the part-time work, school, and installing the parts, Peter managed to win more than 20 First Place trophies in the car show circuit along the East Coast, all of which is no surprise to anybody looking at his Celica.From appearance alone, this '02 Toyota Celica GT is impressive. If the baby blue doesn't overtake your visual capacity, the APR GT300 widebody kit will. And with a set of Nissan 350Z headlights in the front and Lexus IS300 taillights applauding from the back row, the widebody seems to get wider and meaner.

Underneath the girth are four 19x8.5 Racing Hart C4s with appropriately wide lips. They help protect the Rotora big-brake kit and guide the TRD suspension on the cruise down the streets. The shaved door handles, third brake light, and rear wiper, along with the addition of a roof scoop, add to the menacing and sleek look. 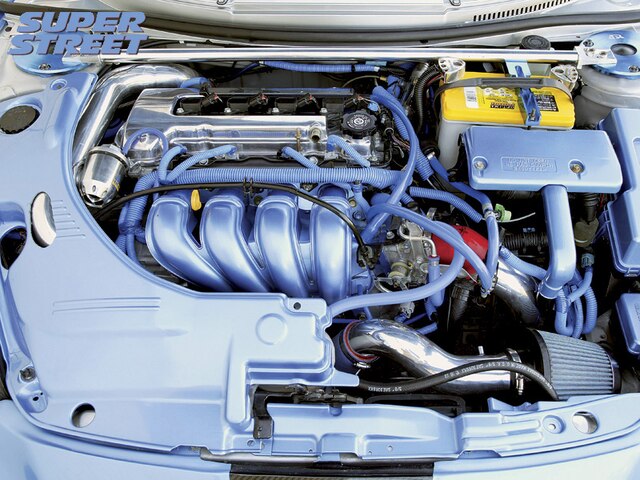 Under the hood is equipment equally intimidating. Lick the exhaust pipe and you'll be a cigarette away from death because a DA Sports turbo kit in duet with a Nitrous Express N-Ter Cooler System heave spent gases like a fiery Top Fuel dragster. A ram-air intake and an HKS SS blow-off valve also combine for a melodious twosome, filling the cabin and everything within a 30-feet radius with harmonious noises of air drawn in and blown out. Everything combines to make a horsepower total of 240.

The interior is a different story altogether. Peer inside and you'll be immediately captivated. The row of Stewart Warner gauges sitting atop the heavily fabricated dash will pull you closer, while the massive 26-inch JVC motorized monitor will pull you back. And don't be surprised if the interior is too overwhelming because, for one, it is. The list of audio equipment goes back and forth from JVC to Polk, starting with the JVC head unit and CD changer to Polk subwoofers and amplifiers. A PlayStation 2 also sits somewhere inside the mayhem, and unlike a potential passenger, the PS2 has a reserved place to stay because there's only one seat in the entire car, the driver's Corbeau CR1 racing seat. The seat faces a large 15-inch monitor and a custom-made liquid/carbon-fiber steering wheel fabricated by the hands of David "Fishman" Rivera, also known as the audio genius of the Florida-based audio company Metra Autosound.

With the help of his buddy Jeremy Carson, Fishman was hired to sculpt the car into a perfect beauty on wheels, a creation that took Fishman and Jeremy three and a half months and a painstakingly large amount of sleepless nights to finalize. Among one of the craziest fabrications is the nitrous bottle enclosure on the passenger side. According to Fishman, "A major fabrication like that is a reflection of the entire car. With a car like this, you should expect crazy things like that." Though Peter was initially opposed to the idea of losing the passenger seat, he was quickly convinced after Fishman showed him the sexy nitrous enclosure. Naturally, nothing was left untouched as every factory panel in the interior was either fabricated or removed.

If for some reason you're turned off and don't appreciate this car, the glaucoma medicine you copped in that Ziplock bag obviously isn't working. I understand there are certain black eyes involved with a car of this magnitude: the excessive flashiness, the overlook of engine performance, and, of course, the lambo doors. But realize that it's featured as a show car, which means the overall package is important, including audio and display factor. Second, it's not a demo car created by some big conglomeration of an audio company, which most might expect. Rather, it's owned by a regular tuner like you, with obviously a better paying job, but I digress. Last, I understand the stigma of lambo doors can sometimes materialize into nausea, but in this case, it adds to the overall scheme. It's a car with a Red Bull-type of energy, and it's only fitting to give it wings. If the overall design and artwork still doesn't tickle you, then you need to break through the gateway of Ziplock bags and try something else.

Unlike a presidential election, which always seems to put the wrong candidate into office, this Celica is for the people. Anyone looking at it should take something away from it, whether it's the overall creativity, the well-balanced combination of performance and sound, or the fact that it'll forever outdo any car in its class. The only thing it shouldn't do is make you burn when you pee.