Home  |  Features  |  Stubbs the Zombie
Subscribe to the Free

After years of fighting the undead, isn't it about time to start living the swinging life of a Zombie? 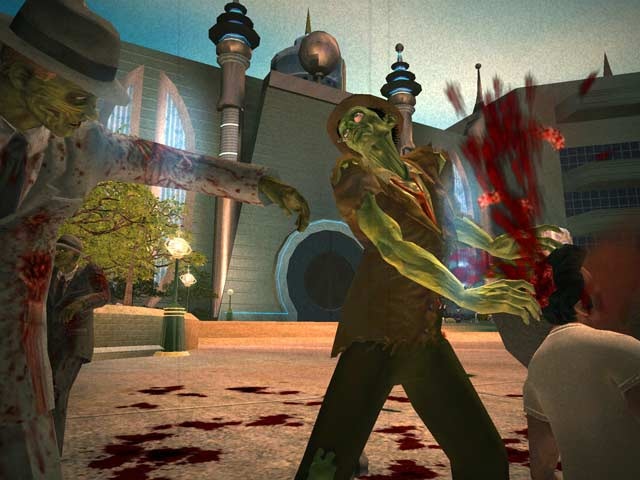 After years of fighting the undead, isn't it about time to start living the swinging life of a Zombie? Xbox and Computer owners can live the Zombie life in "Stubbs the Zombie" the clever, fantastic looking action game that is driven by the famed Halo game engine. Follow Stubbs as he awakens from a 20-year nap with only two things on his mind--eating, and finding out what happened, and how he became a Zombie.

Since all good Zombies love munching on some brains, Stubbs is off to fill his undead needs in the quaint little town of Punchbowl, PA. Beware though, the townsfolk aren't rolling over that easy and they put up a heck of a fight at times, so it's necessary to have your new, undead friends by Stubbs's side to conquer the folks around town. Although, being part of the living dead does have it's advantages--like detachable body parts used as weapons. That's right, rip off Stubbs's head and bowl it into enemies, or pull out your guts to chuck it at some unsuspecting human, or as a last ditch effort, unleash the flatulence of death--one whiff and humans are deader than dirt.

For extra good times, play in co-op mode with the help of new Zombie friend Grubbs, and together work through the game's adventure and solve the mystery of how Stubbs ended up part of the undead. Stubbs the Zombie scores big points for originality and gameplay, plus it looks fantastic and is terrifically funny. Halloween or not, Stubbs the Zombie is one gamers will want to play year round.