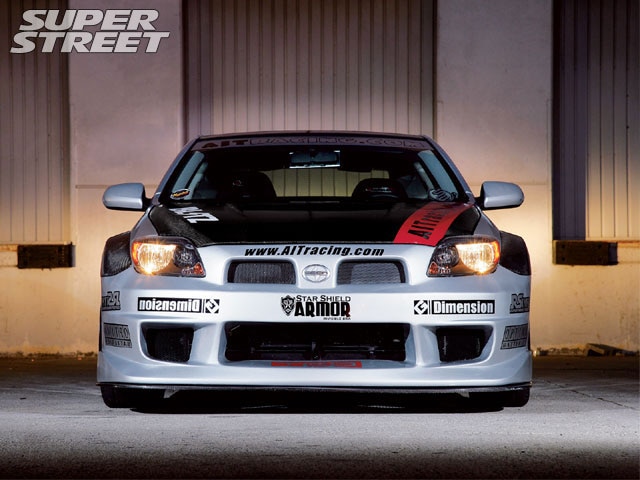 A hypothetical: Let's say you worked as the director of marketing for a company that dealt with body kits. Not just any peddler of fine fiberglass goods, but a firm that specialized in both the design and manufacturing of their own kits. Now, let's say you came across a sweet deal for one of the hottest compact vehicles on the market. Put two and two (or in this case one and the other) together and you're bound to brew up one mean sum bitch of a show car. 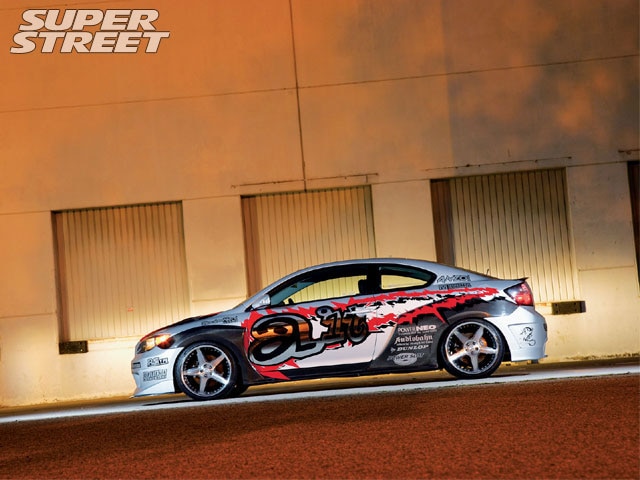 While the above sounds hypothetical, a particular Patrick David who works at a certain AIT Racing out in City of Industry, CA non fictionalizes the story into a case study. Working at AIT for over three years, he's seen all sorts of trends, makes, and models come and go, waiting for the right platform and time to strike. Like the timeless adage, or like a 40-year-oldvirgin, good things, ahem, come to those who wait, and what Patrick was waiting for was the Scion tC. 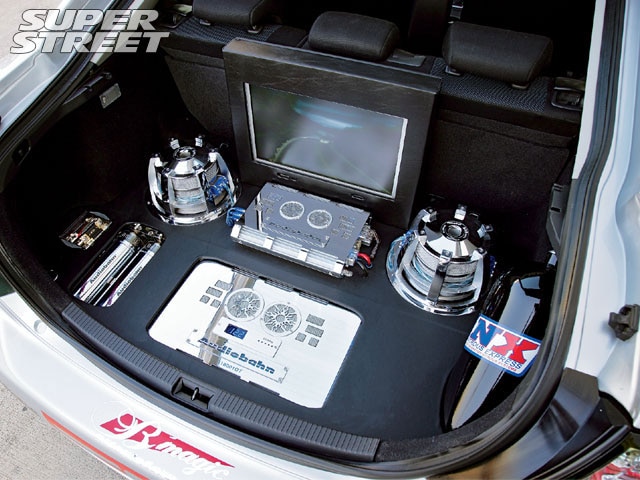 Launched in '05, the first coupe to flaunt the Scion badge had the perfect blend of style ,performance, and, most importantly, price. And it was for those exact reasons that Patrick pounced on the car quicker than Ashton Kutcher at a MILF-filled PTA meeting. Patrick explains, "I built this vehicle because of the great value and quality the Scion brand is known for, and I felt it would be a great base to work off to produce the next hot tuner car." Little did he realize the new project car couldn't have come at a more opportune time. 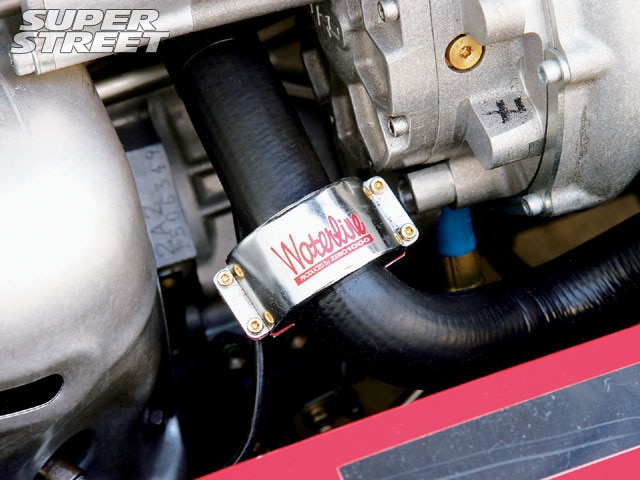 SEMA, the greatest show on earth-well,after the Ringling Brothers-just happened to be seven weeks away. The largest automotiveaftermarket tradeshow, Patrick knew he wanted to debut his new pride and joy there in the glitz of Vegas. With an in-house AIT R&D team of six very creative people, Patrick flexed his director of marketing title, set the timer and put themto work (peep the sidebar for the time elapse build-up). 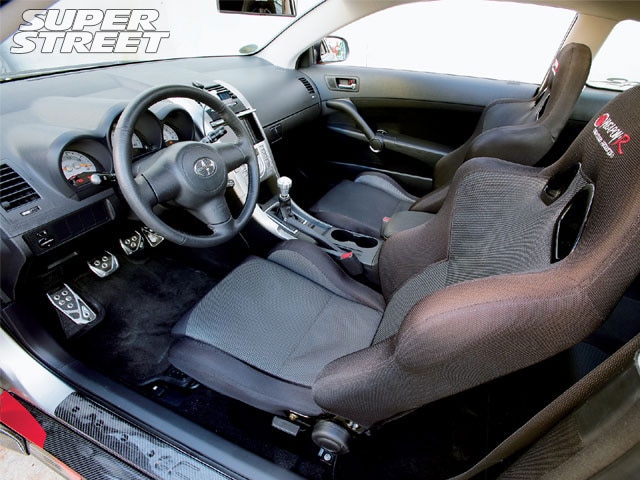 The first thing the AIT team had to come up with was the new look of the tC. Patrick wanted to make something that would accentuate the stock lines while making it look meaner than a hungry Hannibal Lecter stumbling across a fat camp. Going through sketch after sketch, the team spent days integrating diverse styling cues, then altering and tweaking to make them flow with the Scion. What the team eventually came up with is the widebody before you.

From the beginning, the AIT team knew that they wanted use carbon fiber as the basematerial. What they didn't want to use, however, was the common overlaying method, which when improperly done wasn't much stronger thanfiberglass. After some research, Patrick discovered that a vacuum infusion method produced carbon fiber components that were not only stronger, but lighter as well. 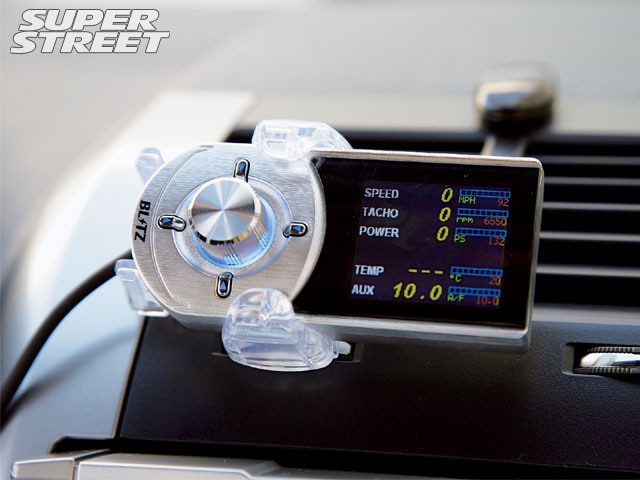 Once the design decisions and material Selection were complete, Patrick and crew went to work on shaping and molding the kit. Starting with the front bumper, side skirts, and meticulously working their way to the rear, the AIT crew grinded and sanded till the body kit fit flush to the body like lactose-intolerant Mo'nique's ass on a toilet seat after she done polished off a case of Bon-Bons-shudder. Afterwards, Patrick slapped on a set of AIT carbon door sills, an RS Type carbon trunk spoiler, and TLS Performance carbon B-pillars. 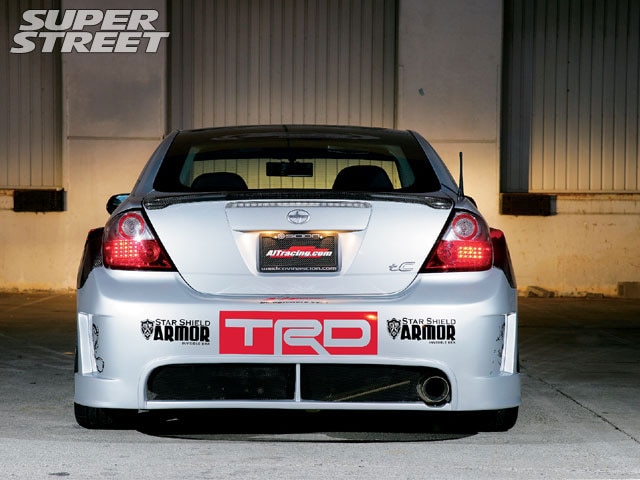 For any show car to make an impact, there has to be enough ice on board to sink the Titanic. Thus Patrick shipped the tC to JLS Mobile Sound, where they replaced, added, and enclosed an Audiobahn multimedia head unit, DVD player, amplifiers, capacitors, and speakers. For auxiliary videooutputs, two Audiobahn monitors were mounted above the rear seats and a 17-inch screen was molded in a custom trunk enclosure alongside a Nitrous Express bottle.

With only a day for performance mods, Patrick called James over at G-Dimension for performance advice. After consulting with his G-Boys, Stephen and Johnson, James came up with a supercharged route for the tC. Starting with a TRD 50-state legal supercharger kit, James and Stephen also installed a Blitz MMDi-Color, Top Fuel PowerDeck and PowerNeo, Weapon*R dressings, Nology wires, Optima battery, and a prototype AIT carbon engine cover to complement the belt-driven boost. Before driving it back to AIT, G-Dimension slapped on B&G coilovers, an RS Type short shift, Weapon*R seats, and had SP Engineering tune the entire setup.

Clock ticking, Patrick had his team strip the body panels, primer everything, and paint the tC the stock Classic Silver Metallic. While vapors from the paint were still lingering, Patrick swapped the stock rims for wheel-well-filling 19x9 Racing Hart CX wheels wrapped in Dunlop tires, vinyled up the exterior, and shipped the car off to Vegas.

Jules Verne (and more recently Ricky'srapidly aging uncle, Jackie Chan) once envisioned a world that could be circumnavigated by manin 80 days using basic means of transportation. While that may have sounded like an incredible feat in the 1800s, to hear of a SEMA-qualitycar being built under 50 days today is just as staggering and damn near unbelievable. But when you have the resources of a personal R&D shop to flog around, anything is possible. As for thet C body kit, it's available now for sale as the K1 package, or as we like to call it, the " Seven Week Scion" kit.

Countdown To Sema
What does it take to get a SEMA car ready in seven weeks?

Follow along...
07:00:00:00
Design phase
Who knew that years of elementary school doodling could turn into a full-time job?
(elapsed time-1 week)

06:00:00:00
fabrication phase
Where the sketches come to life. Sort of like a mescaline-induced trip-only there's a lot more sanding and grinding.
(elapsed trip, err, time-4 weeks)

02:00:00:00Don't want Installers to destroy anything phasePatrick removes the body kit for what he calls "removal of kit for preparation for paint and sanding."
(elapsed time-1 day)

00:06:00:00
Performance phase
Dimension lives up to the "G" in its name and goes gangsta installing in a single day modifications our entire staff combined couldn't complete in a month's time.
(elapsed time-1 day)

00:05:00:00
Oh $#!+ I have less than a week phase
Patrick rushes to the bathroom, averting what could've been a custom-print two-tone race seatand a frantic AIT search for some Febreeze.
(elapsed time-1 hour)

00:00:04:00
Hooray phase
All done, the tC is shipped out to Vegas where itwas proudly displayed in the Anzo booth! Agent Jack Bauer, eat your heart out!
(elapsed time-4 hours)