Home  |  Features  |  Have You Had Your V8 Today? Toyota Corolla AE86
Subscribe to the Free

Have You Had Your V8 Today? Toyota Corolla AE86 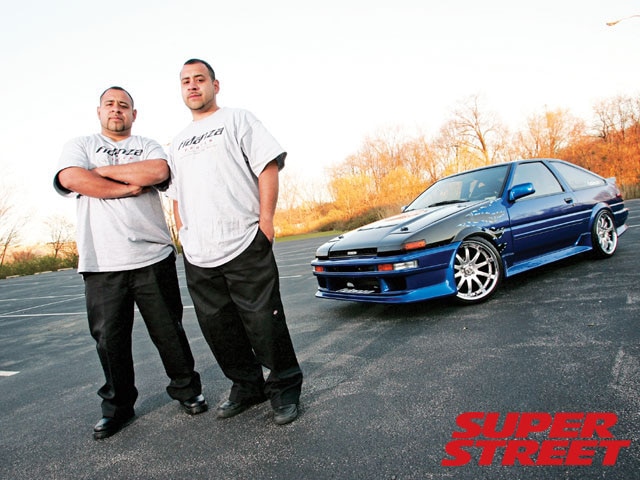 When one mentions the AE86, you're often referring to Chinese bootleg copies of Initial D, drifting, or how great the old school was before those POS "Hondas" came along. Arguably the quintessential rear-wheel-drive sports coupe (available for a fraction of the cost of a Porsche 911), the Corolla GT-S is still sought after to this day for its perfect 50/50 weight ratio and drivability. It's certainly gone up in value, reaching prices of, well, a fraction of the cost of a Porsche 911, especially for a clean, rust-free chassis. If they're not beat too badly they make for great disposable weekend practice cars, but if they're mint, they're almost always already restored back to their glorified state. The Corolla has rarely been pushed over the top-that is, until now. 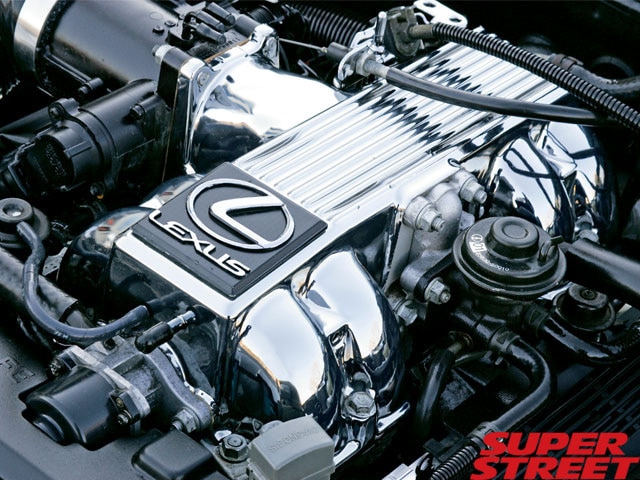 Coming from a long line of Toyota owners, twin brothers Walter and Billy Escoto were raised to love the Corolla. From the time their father wrecked a '76 liftback in the early '80s to the first time they saw an '80 model fly down the quarter mile on ESPN, they always knew the Corolla would be their "it" car. "We used to find these cars cheap," say the twins. "Maybe eight years ago we could walk into an auction and drive one home for $300; $600 at the most. They've gone way up, anywhere from $1,500 to $3,000 for a straight body." So long before the concept of sliding became en vogue, the Escoto twins set out to build themselves the "it" Corolla, shoving a huge 4.0L V8 Lexus LS 400 engine into its bay. "We've been working on the twin cam 4AGs for many years," says Billy, "and to put ourselves into a different category, we chose the LS 400 motor. We tried the 20V, 1JZ-basically every swap-so to top it off, we thought, why not a V8?"

So with the help of NTO Motorsports, thebrothers customized a set of engine mounts to make the engine fit, which required them to cut the front radiator support so the engine could be installed in one piece. Solid mounts were welded in for extra support while a custom transmission mount was also fabricated to hold the very heavy gearbox in place. With virtually no aftermarket support available, the V8 was left stock except for a custom NTO intake and exhaust. A Walbro fuel pump was installed to feed the V8's appetite for power and a Koyo aluminum radiator makes sure it's kept cool. Doing the swap didn't necessitate the use of a custom ECU, but the OE LS 400 computer does piggyback off an A'PEXi SAFC 2 for fuel upgrades. And the two aren't secretive when it comes to the swap either, suggesting that for $8K, they can give your AE86 the exact same turn-key engine configuration.

While the engine configuration could be seen as sacrilegious by many, the body mods should keep the regular AE86 worshippers from causing mass pandemonium. It has that JDM-inspiredflavor, sporting blue paint taken from the Nissan 350Z, a Vertex body kit and rear wing, select bodypanels crafted from carbon fiber, JDM Sprinter taillights and front bumper lights. The brakes also had to see some major modification since a 4AG was no longer guiding the car's course. A brake booster from a '93 model was made to work with a '92 Lexus LS 400 master cylinder along with custom brake lines leading out from the proportioning valve. Drive shafts also had to be custom made, but a factory Corolla GT-S LSD does distribute power evenly to the rear wheels. QA1 coilovers modified by NTO and Tokico Illumina rear shocks from a SW20 MR2 bring the AE86chassis down a little over two inches while an Auto Power roll cage, Nagisa Shakitto (shock tower) plates, T3 camber plates and rear control arms make for great handling.

Inside, you will find some very subtle yetabstract modifications. Ignore the MOMO RS2 GT seats for a minute; stare at the dash. Anything? That steering wheel looks stock, but not AE86 stock-that's because it's a factory Paseosteering wheel. What else? Aren't you supposed to roll the windows up with a hand crank? Not anymore. You can thank a power conversion for handling that job as well as locking the doors. Even the factory key locks have been switched to Solex locks, so you'd better figure out an alternative way of opening this Corolla up (no, put the brick down).

Walter and Billy are proud to say they haven't jumped on any bandwagons; it's not in their blood and they've stayed true to their roots. "Drifting's popular," they both say, "and everyone'smessing with the 4AG, whether it's a standard 4AG, the 4AGZ, or the 20V. But we're not drifters. We're not planning to be in the drifting scene. We're doing this to be different. We've always raced on the streets and the [drag] strip, so that's where we're going to keep it."

Have You Had Your V8 Today? Toyota Corolla AE86
Photo /