The Evolution and Upgrade of Nissan's First American hit 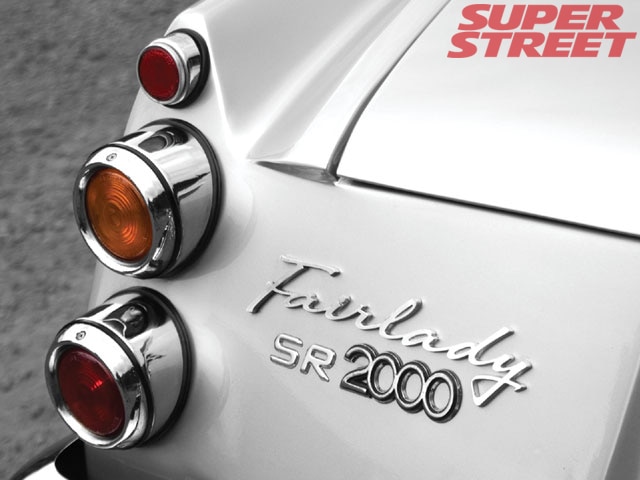 You may know the Nissan Fairlady name-sharp enthusiasts will attach it to a JDM-spec Z car of some manner. But did you know that the Fairlady name dates back to the early '60s, on a line of increasingly fearsome roadsters?

This body-style 2000 was introduced in late 1962 as a '63 model, built to compete head to head with what was then the Second Coming in the sports car world, the MGB. By '68, the Datsun was a far more technically enthralling piece than the English example: your $3071 entry fee got you a sidedraft Mikuni carb-fed 135hp SOHC aluminum-head two liter Four (150hp if you got the optional Solex carburetors), a five-speed gearbox, and a 7000rpm redline in a 2150lb, 90-inch wheelbase package. That curb weight is feather-light, and that's after the safety and emissions gunk was added in. Roughly 6000 came off the line for the year, and about 15,000 were sold in the U20 years (ending in 1970 and replaced with the 240Z), so they were never thick on the ground.

Datsun's pre-Z, even pre-510 history in the US hinged on little MGB-stompers like this Fairlady. Bob Bondurant opened his high performance driving school with a pair of Datsun roadsters. Pete Brock of BRE Racing fame was prepping and winning in these roadsters before the 510 and Z car ever touched tire on American soil-and they're still a club-racing favorite today. At home in Japan, the Fairlady roadster was just one flavor of many spicy varieties available in the showroom. Here in the States, this was pretty much it.

When Jason Brainard of Portland, Oregon (the Henry Higgins in our tale) was conjuring the "fast, fun, reliable convertible with style" that he had always wanted, the original U20 disappeared. Reliability has never been an issue with Datsuns of any vintage, but the notion of finding parts for a 40 year-old engine-even one with the cult status that the roadster enjoys in this country-was. In place of the U20 came another two liter Nissan cammer, the legendary SR20DE, which in naturally-aspirated form as seen here performed yeoman service in a variety of '90s Nissans, including the Sentra SE-R, the under-appreciated NX2000, and the cusp-of-luxury Infiniti G20, among others. 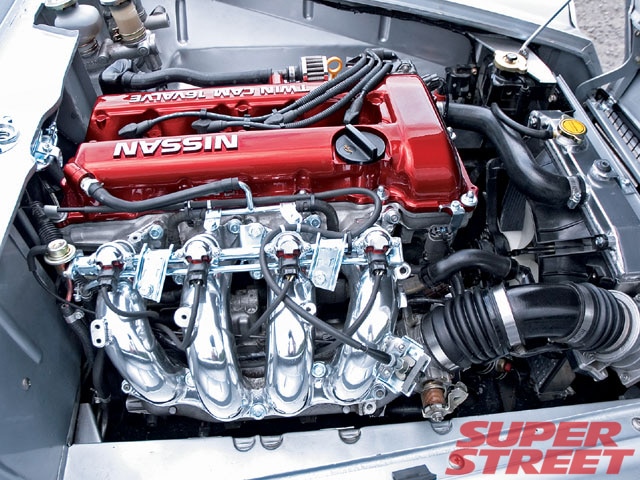 Of course there are differences: the weight savings of the all-aluminum SR20 over the stock iron-block engine, two cams instead of one and electronic fuel injection versus a pair of Mikunis hanging off the side of the block. (We probably shouldn't say this out loud, but the SOHC U20 motor was good for an extra 20 lb-ft of torque to boot.) But now, thanks to less-tortured airflow into the throttle body and some of the SR20's emissions junk placed on the scrap heap, the SR20 puts out an honest 140hp to the rear wheels.

Getting there was not without issue, however: despite the similar configurations, the SR20 was not a drop in. Unlike for, say, the 510/Bluebird, there aren't over-the-counter kits to make this work. The result appears trim and uncluttered, but the short answer involves Jason's pal Michael Spreadbury, a plasma cutter, and triple the time and money anyone figured it would take.

It would have been rough enough to get the SR20 working and call it a day, but Jason also decided to keep all of the computer-diagnostic items intact with the electronics; since Nissan's CONSULT system is still in place, the car speaks quite clearly. Any potential issues can be sorted via the plug-n-play method. The Check Engine and Charge lights are mounted in stock dash locations, and a 55-amp alternator from a Subaru Justy was charged, if you'll excuse the pun, with keeping all of that new wiring working. "Have lots of friends who are dedicated to the same cause," Jason advises.

A '99 Civic fuel pump resides inside a custom-built Jack Scoville gas tank that's 16-plus gallons big (stock was just 11.4); for those who don't know, Jack Scoville was one of the first and best road-racing Datsun Roadster pilots, winning the '69 D-Production ARRC championship with his car appearing in Datsun ads touting the racing victories.

Competition front coils and modified front spring perches dump our Fairlady two big inches closer to the ground, while a rebuilt buggy-sprung rear suspension gets the ass down another inch; the result is a subtle, almost imperceptible rake that still sends the right subliminal messages. Add to that a fatter front sway bar and KYB gas shocks on all corners.

The brakes, hiding there behind the 16x7 Panasports and the 195/50 Yokohamas, are deserving of special mention: an 11-inch, 30mm wide Coleman Racing rotor (with a custom-fabbed hat) graces each front spindle, while a custom caliper mount lets the 300ZX Twin Turbo caliper, polished and custom-engraved with "Datsun" lettering on each side, do its work. The rear drum brakes are also polished aluminum, and all four corners wear Porterfield pads and shoes. A 7/8-inch 280Z master cylinder and stainless brake lines are also part of the package.

The body's crisp lines are untouched (no need to mess around when you've grown accustomed to her face), and are brought into sharp relief thanks to a coat of silver Honda S2000 pigment sprayed by Tim Bridges of Springfield, OR. Euro-spec trim bits include the side mirrors and the amber taillights. The Fairlady emblems were added on too, but despite what sounds like a fussy look, the tone-on-tone chrome-on-silver result is quite different, and tasteful. The rollbar-installed by Al Epperle of Salem, OR-was painted by Scott Daniels.

Inside, the standard-issue low-back buckets that prang you between the shoulder blades have been given the heave-ho, and were replaced with a set of red leather chairs from a '93 Miata. Beyond that, a smaller-diameter MOMO wheel and shift knob are in place, the center-mounted tach is an Auto Meter piece, and all of the plastic gauge lenses were replaced with glass. The only other change Jason wants to make revolves around the dashboard: rather than the '68-up padded dash, he wants to revert to a '66-style all-metal dash, with toggle switches instead of safety levers, and an instrument cluster full of Stewart-Warner gauges.

This particular Fairlady draws eerie parallels with its erstwhile theatrical namesake: owner Brainard, as Henry Higgins, takes something that was born a certain way, and was then primped up to go beyond the limits of whatever could have been dreamed of at the time. Though it is something entirely new and lovely, at its heart, it is still the same beast-one that, changes or not, it's hard not to fall in love with. 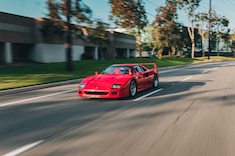