JDM Wishing It Could Be USDM? You Bet. As one of Toyota's few US-market-only vehicles, the Scion tC is virtually unknown to Japanese consumers. Though they have been getting the xA and xB for years (under the guise of ist and bB), there is no Japanese counterpart available for the tC and it will never be sold in any Japanese dealership. But if a J-man truly desired a tC, the primo two-door could be exported back to its country of origin (yes, the tC is manufactured in Japan) to go heads up with the likes of a Levin or Trueno, which are about the closest things to a tC. This is exactly what G-games, a subdivision of the mighty RAYS Engineering empire, did; they bought a tC new from a US Scion showroom and had it shipped back to make this year's Tokyo Auto Salon as a demo car for the RAYS booth.

In the typical Japanese fashion, G-games decided their project would work best if their tC emulated our American style, or what's been dubbed "spo-com" (short for sport compact). But really, they had no choice; the only parts readily available for a tC can only be brought in from the US. While the 2.4L 2AZ-FE struts its stuff with one hundred sixty some odd horsepower, G-games bolted in a GReddy turbo kit to give it even more, using a TD05H-18G at its heart; there's also an optional intercooler kit to match, a SUS manifold and a racing downpipe that leads out to an Evolution 2 exhaust. GReddy also supplied injectors to feed the motor 440cc shots of fuel, which are then finely tuned through an e-Manage Ultimate piggyback engine management controller. On the flip side, an Informeter from GReddy is custom mounted on top of the dash in an Auto Tech Interiors pod next to a SARD boost gauge, and works harmoniously with the e-Manage Ultimate to provide OBD monitoring and data-logging.

G-games then sent the tC off to RedRineR (insert cliche/funny ESL joke about Jonny here) Sound Connection to get some LA bass pouring out of its trunk. A very large enclosure was built to house two of the biggest Kicker subs we've seen in recent memory along with 2400W RS56.2 amps, but it's unsure which JDM double DIN monitor was stuffed into the factory audio console. There are also Bride Zeta 2 seats installed to take residence over the OE recliners and 5Zigen pedals. 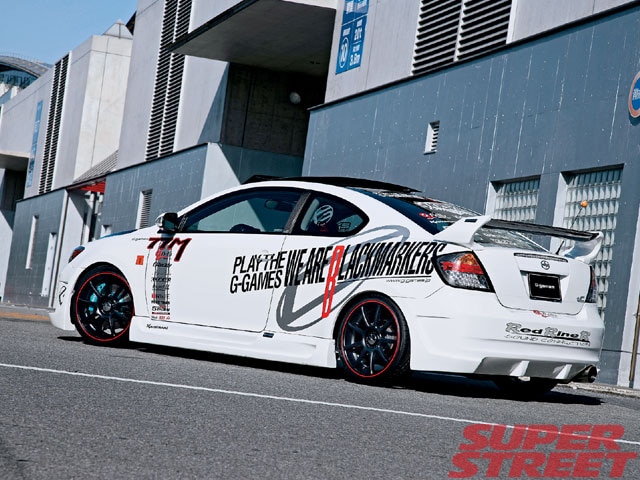 If you've been keeping tabs on the Scion scene at all, you know that the people who dedicate their loyalty to these types of cars are the hardest of the core. They are, in essence, the current "Honda Civic ricers" (please take no offense; this is merely an example) who do all in their power to separate themselves from the rest of the car world. Some go mad, like 5Axis, taking modification beyond the point of no return; others do a simple take, like a lip kit or clear taillights. But no matter how extreme or tame the look, one thing's clear: their "look" really unites them as purists-"Scion extremists", we say. We'd like to think G-games shared this mentality when they installed a urethane Kaminari aero kit to the chassis, but we're sure they didn't. What you did get was a great look that managed to continuously stop crowds at TAS. They may have even missed the very point RAYS was hoping to get across: that its latest G-games 77M wheels come in the limited Time Attack colors the TE-37 and CE-28 received last year.

We don't need to tell you that the G-games tC was a big hit for RAYS, but it probably didn't hurt to have Eika and Hiro (two authentic JDM race queens) prancing around in school girl outfits-just like we do at home. G-games and the American style? Mission accomplished.