The next chapter of Japanese style (a.k.a. what happens when our scene grows up) 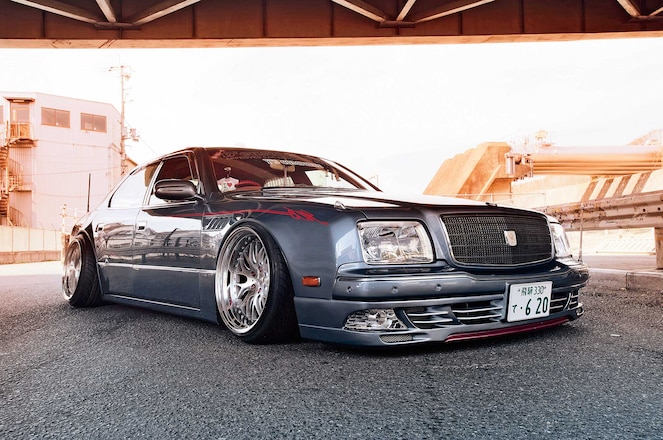 Updated June 2020: In putting together our recent article on the Top 5 Most Popular VIP Cars we've featured, we somehow ended up at this gem of forgotten editorial from 13 years ago, onetime SS editor Carter Jung's somewhat exhaustive look into VIP style origins and characteristics. While the cars in the gallery were admittedly pretty dated, the meat and potatoes of the story is still largely correct; we updated some facts, polished up some language, and added a glossary of VIP terms at the end, but the piece is otherwise as it ran originally.

The "tuner scene" over the last 30 years has evolved a little like this: First there were the dragstrip-tearing Hondas. Then came the rise of show cars. Drifting's been smoking up tracks for years, and Time Attack's made driving lines sexy. But when the scene grew up, only some stayed faithful to Japanese brands, opting for bigger sedans to haul around adult life in. We sorta matured past the squeaky-voiced, no-hair-on-the-playing-field laddie to a deep-throated, gorilla-chested adult. And the name of this new man? Bippu-san. Or if you prefer English: Mr. VIP.

You've seen them at car shows and on the street—big-bodied sedans rocking muted colors and oozing elegance and style. It's a Japanese tuning aesthetic that's sexy and sophisticated as hell. And like the first Galapagoan iguana to leap into the seas, it was only a matter of time before VIP cars would hit the US. It's our scene, evolved. To learn about the origin of the new Bippu species, we have to take an HMS Beagle of a trip across the Pacific to Japan, circa early '90s. 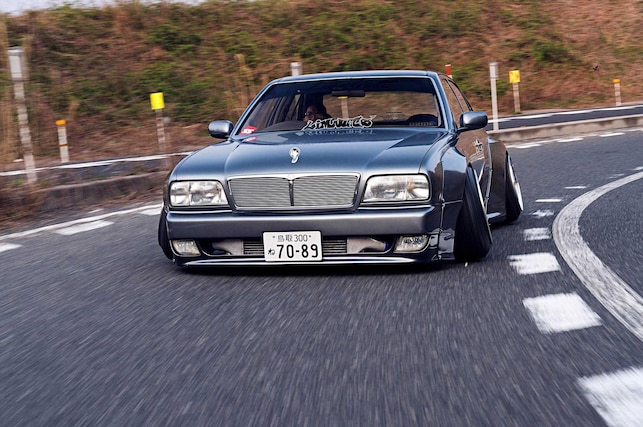 It's 11 in the evening, and you just finished dinner with your company. Tired after a long day's work, you long for your bed and some quality time with your hentai anime. Still warm from the last shot of sake, you hop on the Hanshin Expressway, one of Osaka's major beltways, and make your way home. Cruising at a comfortable 60kph in your little Fit, the hum of the road is shattered with what sounds like the shriek of a thousand castrated elephants followed by a blur of light that rocks your car violently from side to side. Startled, you swerve as a sequence of similar rockets fly by. Damned street racers!

An all-too-common scene in Osaka, street racers in the early '90s would often take to the roads in high-speed chases and tire screeching drift battles. Terrorizing the city streets like a bad scene out of Tokyo Drift, Tetsu Q. Public's cries for help pushed the Osaka police towards a crackdown on illegal street racing. As a result, speed cameras, checkpoints and stings were setup to quash the road rebels. 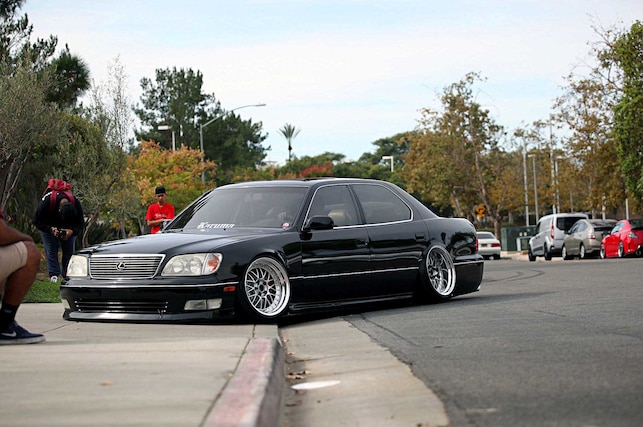 Feeling the heat, many Osaka street fighters looked for a more subtle way to cruise the streets. Since sport coupes were being targeted, innocuous-looking sedans made for a better option. VIP was born. Taking Euro styling cues from luxury-sport AMG-modified Mercedes, modified dark-hued saloons emerged on the Osaka streets, blending in seamlessly with the public.

At about the same time Osaka's VIP culture was coalescing like cold bacon grease, up north in the Kanto area of the Tokyo prefecture, the more thuggish element known as the Bosozoku (Bo: abbreviation for violence; So: short for speed; Zoku: tribe or group), a motorcycle mob turned car hooligans, looked for a new form to roam the streets. Picking up sedans flavored on the incognito tip, the Bos element would cut stock coils and mufflers and slowly cruise about the streets looking to stir up trouble like Frank the Tank after one too many beer bongs. 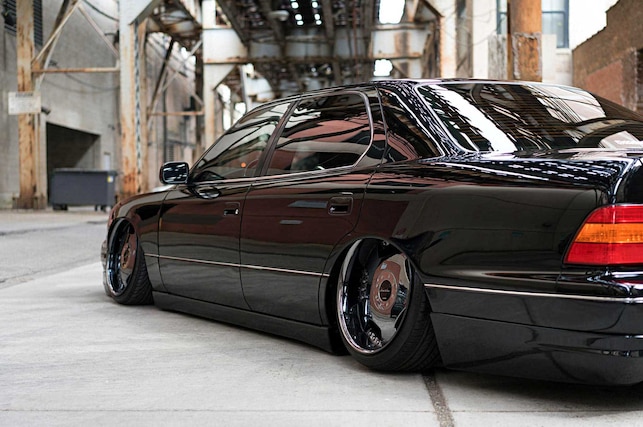 Unlike the street racers of Osaka, this breed of Bos Bippus was loud and bold. Known to cause havoc and mischief-think Curious George meets the Hell's Angels-the members of Bosozoku were infamous for deliberately driving slow on public streets, causing traffic congestions on the highway, skipping tolls and just plain driving recklessly. Modeling themselves after the elder Yakuza element, they picked large black sedans as their weapons. What better to dirt in than an understated four-door? 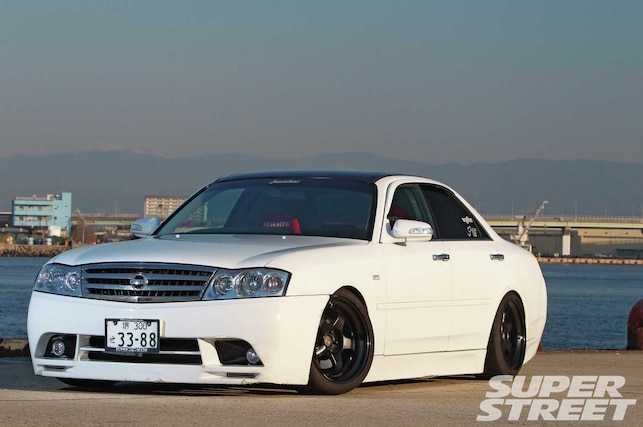 With VIP's underground inception, it's only natural for its styling cues to be subtle. Unlike show cars with ostentatious paint jobs and aggressive body kits with wild wings, VIP cars are camouflaged for urban duty. If you're a brash Bosozoku tired of being busted, or a street racer sick of getting sweated, you'd want your key to dangle as low as possible. And it doesn't get any more low-key than a flagship saloon built for the executive demographic. It's the mafia equivalent of opening a money-laundering storefront.

Over time, VIP transcended its seedy element. A new form of tuning, it appealed to a wider audience looking to modify a luxury sedan. And for the Japanese VIP purist only a few platforms qualify, with the viable makes residing heavily in the Toyota and Nissan camp. US variants of the Lexus LS and GS, the Infiniti Q45 and M45, as well as other J-exclusives proliferate under the VIP banner. As of recently, however, VIP Style tuning has crossed over into the more affordable realm of subcompact K-cars and larger Minivans. Bippu Fits and Odysseys? Best to believe it. 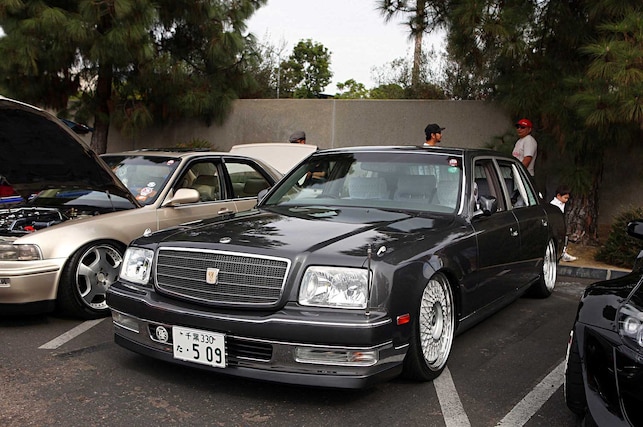 Although makes may have transcended the flagship saloons, there is still a common theme when it comes to VIP styling: clean. Black is the traditional Bippu color, but other muted hues such as whites, maroons or silvers are acceptable. Full body and lip kits are simple, taking the stock lines and mildly exaggerating them. Spoilers, if any, are small and most graphics are frowned upon. At most, owners will place small crew or shop stickers on the front windshield or on custom license plate frames. Add any anime characters, flowers, tribal or six-foot long Honda or Civic stickers and you'd have to lose a pinky finger. Instead, chrome emblems and grilles are used to contrast the body of a VIP ride.

The feeling of understated luxury is carried over onto the cabin of a VIP car. A dealership's wet dream, factory style accessories proliferate—"factory style" being the key words. Aftermarket floor mats, seat covers, wood trims and steering wheel covers give the interior a sense of lavishness. About the only flashy modification you might see in a VIP cockpit is the ICE. Thanks in part to US trends, integrated monitors and audio is executed la flying first class. Other tell-tale VIP traits are rear curtains, rear view mirror ornaments, tables and pillows. If you can't tell, attention is carefully paid to the small details. After all, it's the sum of minute details that separates a room at a Motel 6 and one at a Ritz-Carlton. 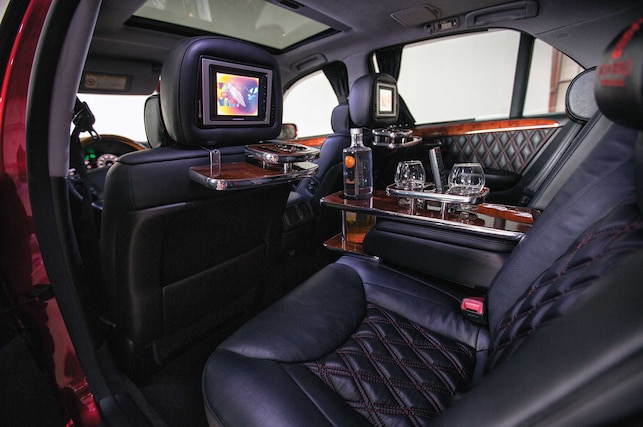 As for tuning, the typical VIP car is light on the modifications. Built motors, huge turbos and nitrous are for the birds and racecars. Instead, mufflers, brakes, suspension bars, camber kits and coilovers are about the only things a Bippu boy rocks. Height adjustable airbags once left to the lowrider world are now popular means to slamming your JDM ride.

While VIP cars aren't going for the "Hottest Engine" or "Hottest Performance Vehicle" awards, what definitely is hot on a VIP car is its wheels. Paradoxically, while most of the exterior is on the hush-hush tip, the wheels scream louder than a pack of triggered Honda fan bois. Huge, gleaming rims with aggressive offsets lathered in a thin coat of tire is the final quotient in the buff VIP look. Before you think about re-drilling the 16-inch wheels off your Accord, don't. Bippu's be flossing 20s and up, holmes. 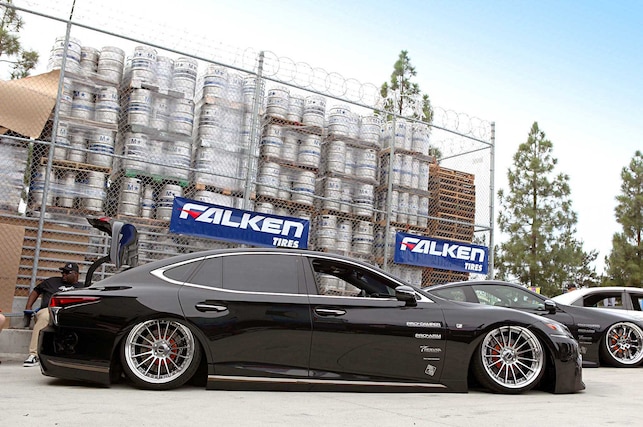 The Wave of the Future

Now that VIP's managed to slip past Homeland Security, what can we expect? Well, if there's one thing we Americans are good at, it's adding a twist of our own ingenuity. Builders have applied VIP style to non-traditional VIP platforms, while others have taken their rides to US tuners and thrown in high horsepower setups. And thanks to a variety of VIP-friendly events around the US, VIP styling is tearing down four-doored Bippu walls.

So how does one define VIP? You can't. At its core, VIP defies the norm. It is a form of James Dean-like automotive rebellion against authority, and the search for something different and altogether new. With only a loose set of guidelines, it is what we make of it. It is one future for our scene, the maturation of JDM, and, like the scene, will continue to grow and evolve.

Appetite for VIP whet, yet? Here's a list of VIP-related tuning links to get you inspired (read: broke as a joke).