...On The Receiving End Of A Pounding From This Turbocharged EFI Twin-Cam TE27 Corolla

In the early `70s, the Japanese performance car was something of an oxymoron. Tales of the Nissan Skyline's racing exploits stayed abroad, and the Toyota 2000GT seemed too exotic for most. Datsun made some inroads--specifically the Sports Roadster models, and later with the Z-car and 510/Bluebird. While Mazda's rotary seemed hot, it fought to overcome reliability issues. 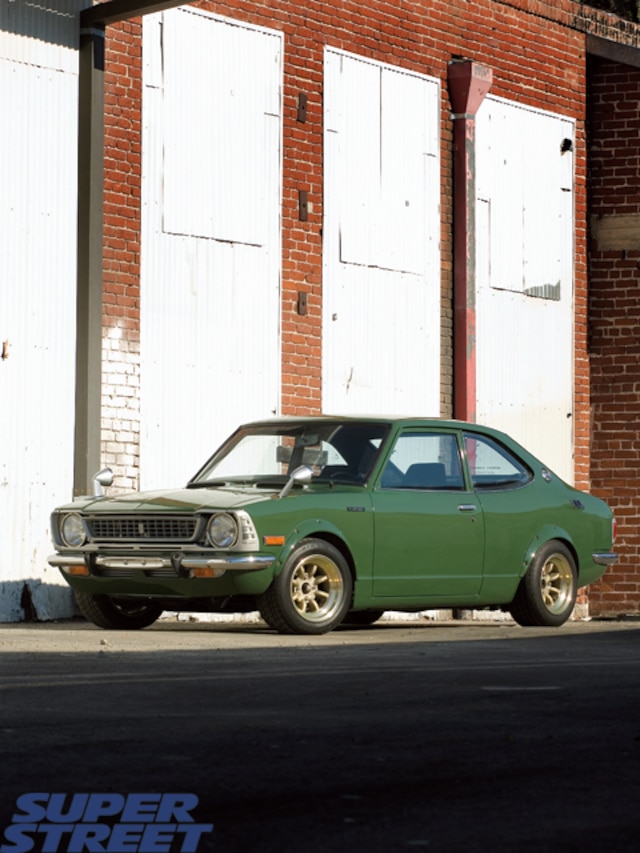 Toyota offered the option of something "spicy" in the form of a Celica. The Corolla, which had made Toyota a force not only in the States but around the world, was perceived here as a good, solid, basic economy car--like a VW Beetle built to 1970s (not 1930s) standards: excellent quality, dependable, quirk-free; nothing flashy about it. It remains a default choice for small-car buyers even today, and one of the major reasons why Toyota has displaced GM as the world's largest car company. But exciting? With a few notable exceptions (hello AE86 twin-cam GT-S1!), not really. While the grandpa brigade upstairs at Hot Rod magazine managed to chop three seconds off their quarter-mile time and earn a .77g cornering figure from their model back in 1972, few then were into the Corolla for its performance merits.

At home, however, a horsepower war was raging. While the Corolla's top engine was the two-barrel OHV 102hp 1600 Four, the home market was able to choose the immortal 2-TG which featured an aluminum DOHC head with hemispherical combustion chamber and a 115hp power rating. High performance Celicas like the not-for-US-sale GTV received it, but so did select Corollas, like the sporty Levin and Sprinter Trueno models (yes, these monikers predate the AE86). When emissions controls heaved into view, Toyota replaced the 2-TG's carbs containing electronic fuel injection-years before these types of controls showed up on US-spec cars, earning the twin-cam a further E in the high-winder's alphanumeric-bet soup.

In the early '70s, American cars regularly had 350 horsepower to tote their lardy butts around, while Japanese manufacturers were struggling to get a foothold in the industry. Would a 115hp twin-cam engine have had any resonance with buyers? Would the extra cost, in a price-sensitive end of the market, have justified the extra dozen horsepower? Most likely not. Thus, it stayed home while America got the sporty SR5 models with five-speed stick, fender flares and other sporting accoutrements. 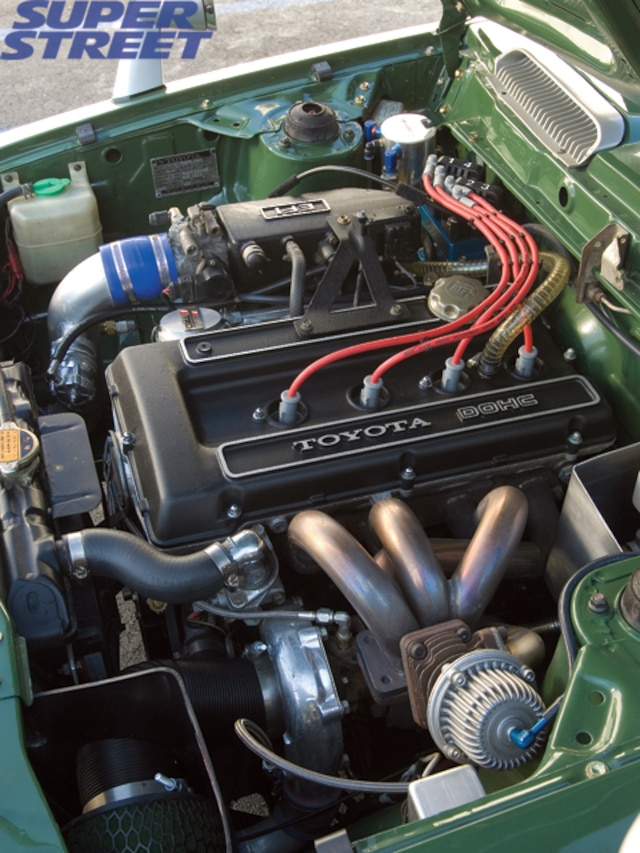 When Ronald Cajayon of Orange, CA first started building his '74 TE27 SR5 Corolla hatchback some time ago, he could have sourced a 2TGEU, dropped it in, and just soaked up mad old-school props. But that wasn't enough: Cajayon wanted real power. One thing led to your mother and pretty soon, there was an extra 400cc of displacement, compression dropped to 7.5:1, plus a cantaloupe-sized Garrett turbo hanging off the exhaust header-all good for 190+ horsepower at a searing 8500rpm headed straight for the rear tires. By itself, the horsepower doesn't sound massive-shoot, a new Civic Si does a little more than that now, and it feels pretty good, right? But a new Civic Si also weighs 800 pounds more than the TE27. Lots of other cars have more power, but many of them will need to slim down to reach the power-to-weight ratio of this baby.

Ray Gonzaga of Racetoys in Diamond Bar pieced the engine together from only hand-crafted, premium TRD and JDM Toyota components. The aluminum head was treated to a mild port and polish with new TRD valves and springs, while the mild cams (customary with a turbocharged engine) offer 9.5mm lift and 272/264-degree duration. A custom air intake with HKS Mini-Pro and a 7M-GTE (late '80s turbo Supra) throttle body feed a stock intake manifold. The custom fuel rail, Bosch fuel pump and race injectors, and Toyota 2JZ-GTE regulator provide the gas, while a breakerless ignition and Nippondenso Iridium plugs send out the spark. All are controlled by a Simple Digital Systems engine management system.

The turbo itself is regulated by a Blitz boost controller, a Blitz blow-off valve, a HKS wastegate and manual boost controller, which Racetoys designed just in case. The intercooler and piping were all fabricated by RaceToys as well.

Sounds pretty stellar. And it is, make no mistake about it. But when you pop the hood, you'd be hard-pressed to find anything other than stock pieces in there, so well-integrated are they in the overall package. It's a testament to Racetoys' uncanny ability to make everything resemble factory parts. Oh, that turbo's not hidden or anything, and there's no squelching the incredible sight of that twin-cam head with its plugs right in the middle (and really, why would you want to?). But, what's missing is the usual brightly-colored fittings, polished components and stickers that greet us in the workroom. 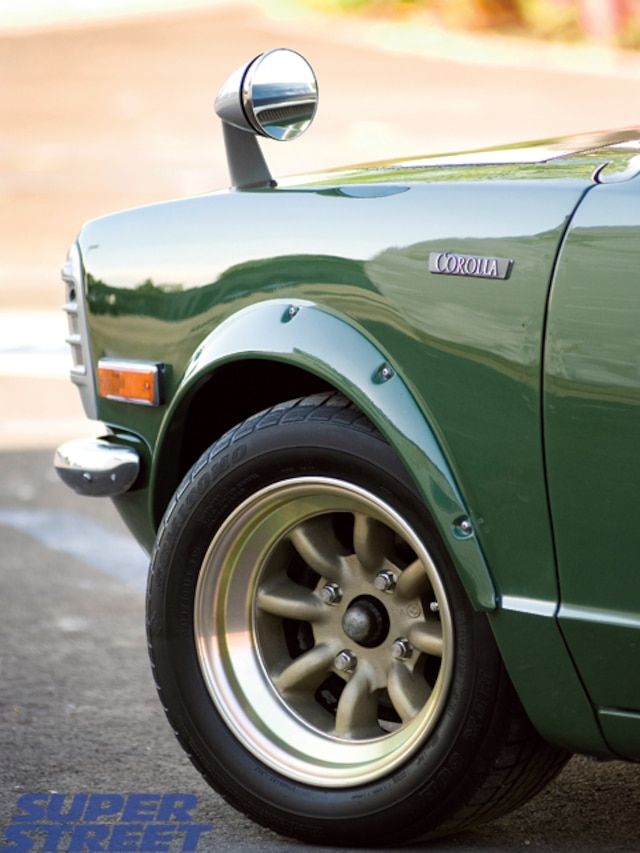 That clean look extends to the outside of the car as well. Other than a JDM front valance, Hella lighting, smaller chrome pre-'74 bumpers (to replace the federally-mandated kneecap-wreckers) and a couple of sponsor decals, the body is clean and untouched. Those flares? Available on US-spec SR5 Corollas like this one. You don't lose the shape of the car in the graphics: P.J. Bonifacio's smoothly-applied British Racing Green paint suits its supple, sensual curves. Even the wheels, 13x8 Watanabes rolling on 215/50R13 BFGoodrich meats, look wide but not uncomfortably constrained by the sheetmetal or wheelwells. This makes the fairly mild drop-roughly two inches all around-seem all the more dramatic.

The inside is stealthy too: among a flurry of JDM pieces (dash kit, shifter and console) are low-back TRD seats covered in a factory black, neoprene material to look closer to stock, and a 330mm Nardi wheel fitted with an old-school Toyota horn button.

With that kind of power under the hood, Cajayon doesn't need to advertise. But even so, people still flock to him. "A friend in Japan said I can auction my car there for more than $20,000 ... but here in the US, there are too many low-ballers and people who want to jump on the old-school bandwagon. My advice to someone who wants to do one of these? Be patient. Find a car that has value-like the GT or SR5 models-and do your research, know your goals and limits, be unique and always respect your fellow builders and enthusiasts."

Power Ratings: A Brief History
In 1972, the new 1588cc engine, offered in US-spec Corollas for the 2-TC, put out 102 hp. Back in the day, magazines called it a great leap forward over the previous 72hp, 1200cc engine. But in '73 and '74, the 2-TC's factory power rating dropped to 88hp-a 14hp decrease. Suddenly, the 115hp 2-TG twin-cam engine looked like it could have made a bigger step up than otherwise might be indicated in this story. Yet it never advanced.

Well, in '72, the US government changed the calculations for how the car companies could measure horsepower. In the '50s and '60s, car companies would use as few extra power-sapping components (like power steering, air cleaners and air-conditioning compressors) as possible to maximize power figures on a dyno. They would even run tubular headers. This is referred to as "gross" horsepower. For varied reasons (most likely to do with large numbers of American boys dying in accidents behind the wheel of 400hp musclecars in the late '60s), the government stepped in and demanded that power figures be measured by a "net" figure-ie with air cleaners on, blowing through factory exhaust manifolds, etc. While there was a greater strain on the test engine, the engines in the cars themselves changed very little, if at all. So even though there was a roughly 20 percent power drop on paper, it was impossible for drivers to feel by seat-of-their-pants. The 115hp 2-TG, had it been tested, might have been rated at just 95hp. This still wasn't that big of a leap from the factory's 88hp 2-TC to justify the cost of bringing it to the US. 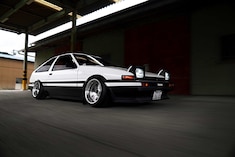