One girlie does drag right

Anna Comingore is probably the perfect woman for all of you car nuts: she's a model and she races. But Anna wasn't always the bikiniracer we all know and love. Believe it or not, Anna has a Bachelor's degree in Forensics and Sociology and originally wanted to work on homicides. She didn't start modeling and racing until 2003. How'd it happen? Call it fate or a life-changing experience. Having dinner with a sister doesn't seem like a life-changing experience. But having dinner with Ricky's sister is another story altogether (Damn, Ty; now Ricky's gonna have to kill you. - JN). But Anna's dinner with her sister became just that- a life-altering experience. One Friday night, the two siblings walked into an Italian restaurant on the outskirts of Vegas and were greeted by the owner and maitre d' of the establishment, Rami. Here's the shocking part: Anna asked him out and the dummy said no-he had a "girlfriend" at the time. We can respect his loyalty, but we'd dump our collective women for Anna in a split-second. However, everything eventually worked out and the Italian restauranteur and Filipino-American model got hitched. 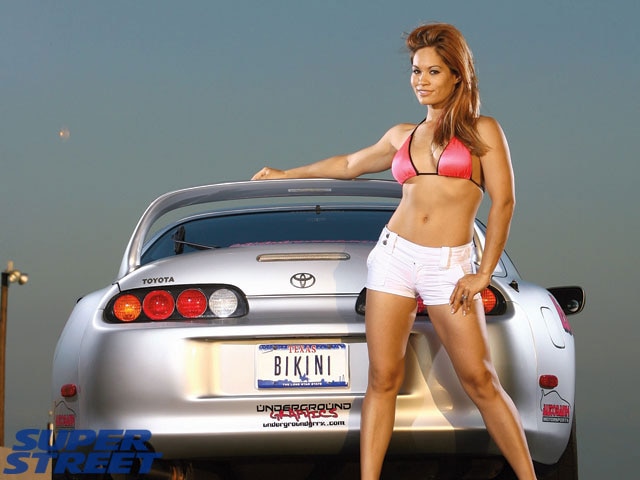 That's not where the story ends, but where it begins. Anna's new husband Rami would cart her around to car shows and racing events. It didn't take long for her to get the urge to give racecar driving a try, so they took her Toyota Supra to the track. Rami, a big autocrosser, had little interest in taking the Supra on the 1320; he suggested that Anna do it. They had just bought the car, so it was pretty exciting for her. That single run with the Supra was all it took for her to get hooked. Anna officially made her debut at the Mazda NHRA Sport Compact Nationals in August 2004, coming in 2nd in Sport RWD.

The car didn't remain stock for long. An encounter with an Eclipse prompted the model-turned-racer to increase power to the upper-300 range. So what was it that exactly happened? She laughs about it now: "My crew chief said, 'It's an Eclipse, don't worry about it. You'll probably take him', but it was a total sleeper. We never bothered to look under the hood. He walked away from me at about the 60 ft." That's when she started adding "little things to make the car fast." Indeed, the JZA has a few choice bolt-ons like: a Max Air intake, RMM downpipe, straight pipe, HKS Super Sequential Blow-off valve, HKS Type S intercooler, HKS Carbon Titanium exhaust and a HKS EZ-II Boost Controller. With that combination, the car easily pulls low 11s.

That's making fantastic time, considering the Supra could still be classified as a street car. KYB AGX struts, Tein S-Tech springs along with CCW skinnies 16x5.5 up front and her factory wheels in the rear, shod in BFGoodrich Drag Radials-that's all it takes Anna to kick your ass on the quarter-mile. But she's not done yet. Her goal is to get the Supra into the 10s. With a little weight loss (on the part of the car, jerk), Anna's pretty confident that she can do it (we'd like to do it with Anna, too). 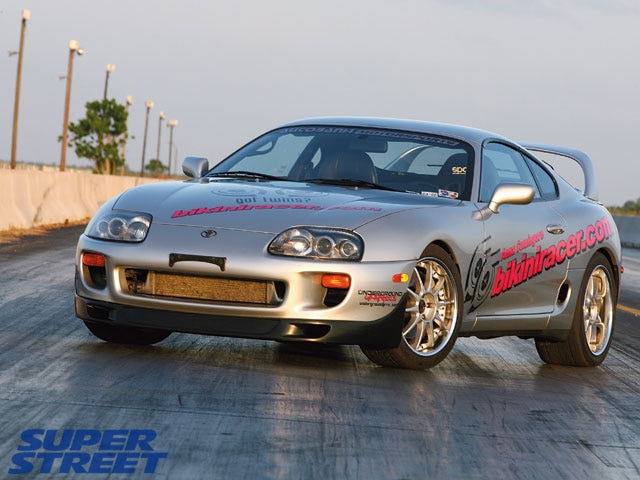 A regular race weekend for Anna and Rami consists of packing up the truck and car in the enclosed trailer on Wednesday or so. The couple leaves Colorado Thursday night, with Rami driving through the night; sleeping at a truckstop on the way is not uncommon. Anna, Rami and their dogs wind up sleeping in the truck and trailer again on race day and the day after. No posh hotel for the bikiniracer.

It's pretty awesome talking to Anna and listening to her speak about her experiences. Even though she regularly races in a bikini, she's no girly-girl. "Getting into racing has been a learning process, I learn something new every time I go to the track. At first I learned about the beams, then staging, then courtesy staging. If I lined up against someone who had a faster car, then my goal was to get him at the tree. If not the tree, then at the 60," she said.

And about that bikini myth-it ain't no myth. For Anna, it's not uncommon to go to a race and also compete in the bikini contests. "I do race in my bikini, I'm in a bikini under my [nomex]," she explained. This is no easy feat; it requires that she be ready to stage at the tree, use a golf cart or something to go compete in the bikini contest, throw her clothes or suit back on and then get ready for another run. Dirty Nads suggested that she could save a ton of time and make a nomex race suit to look like a bikini; in reality the bastard stole my idea. Good thing I didn't tell him about the ass-less chaps.

ICE In the fridge