In one summer, Cynce Tester busted some serious ass, working 80 hours a week at two jobs to save up the $15 grand needed to finish her car in time for last year's SEMA. That's a good hustle, considering most people have trouble dropping coin for a set of wheels, let alone an extensive build such as this. But most people aren't like Cynce. And her Scion tC isn't like any other Scion. After a long history of driving beat-up cars, she saw the potential in Scion and took the plunge, enlisting Teske Design to guide her along the righteous path of building it right from the start. "I really want to show the boys what us girls can do," she says. And here's what Cynce did. 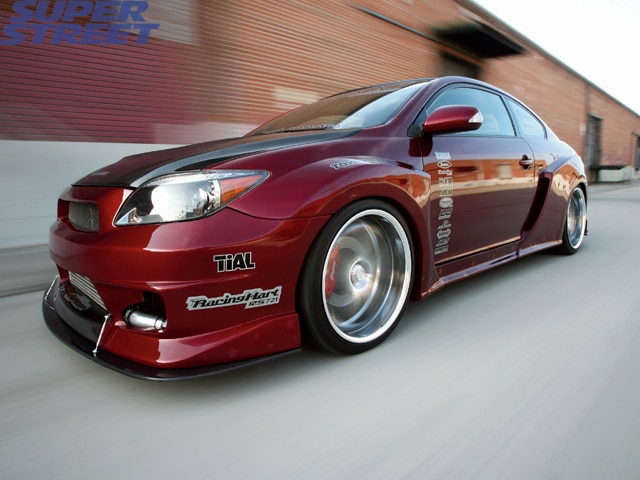 Almost immediately, the car went from stock to shock. No body panel was left untouched as it was converted to widebody status with an AIT Racing K1 Series body kit. The fenders and side skirts were molded into the body with the front and rear bumpers also receiving a custom touch before being bolted on. It was then repainted with a Kandy Apple Red from House of Kolor with a gold base coat to make it pop. Cynce also replaced the stock hood with a carbon fiber piece from Kaminari, color-matching the underside of it to the car and added carbon splitters from APR to both bumpers. Pearl Ghost stars were also painted along the side skirts and underneath the hood, matching Cynce in a totally unique way: "My car and I have matching "tattoos," she says, "I have these stars all over, just like the ones on the back of my thighs." Cooler than a tribal tat, that's for sure.

The next task was to make some power. And what could be easier than adding a little boost? Well, things don't always pan out so easily. Although the installation of her Dezod Development turbo kit was cake, tuning it wasn't; it wound up becoming a major disaster. Not just the actual turbo kit itself, but because the engine dropped a valve, which resulted to a thrown rod and five holes punched through the block. Lucky for Cynce, her dad's a seasoned mechanic; within a day of blowing up the original motor, he swapped in a fresh replacement out of a totaled tC. She was back up and running in no time at all. 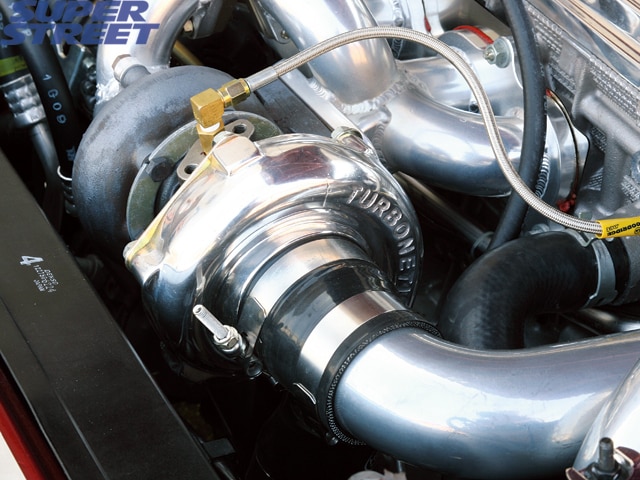 In addition to the turbo kit, both a blow-off valve and wastegate from TiAL are used to relieve the system of built-up boost pressure. Turbonetics' T3/T4 hybrid turbo with custom specifications from Dezod hangs off a Dezod manifold, which leads out to a Dezod downpipe and DC Sports exhaust. A huge Spearco intercooler fills up the AIT bumper and nearly all the piping has been silver powder-coated while the turbo components have been ceramic-coated. Cooler air is directed towards an AEM DryFlow air filter with the help of a GReddy air diversion panel and getting the tC into complete tune was achieved with a GReddy e-Manage, which is now a plug 'n' play unit because of Dezod's e-Manage harness adapter. With a new motor in place, Cynce's tC finally put down 280hp at 6,400rpm.

Realistically speaking, a show car like this is unlikely to see any serious track duty. But that doesn't mean it can't handle like it could. To do this, a set of H&R adjustable coilovers were installed to lower the car a couple inches closer to the pavement and a DC Sports CS-2 strut bar was added to take a little flex off the chassis. A 12-inch, 4 piston big brake kit from Rotora gives the tC some stopping strength as do the Powerslot rear rotors and of course, it rolls smooth on a set of 19x8.5 Racing Hart RS721 wheels that have been married with a set of 235/35R19 Toyo Proxes4 tires. 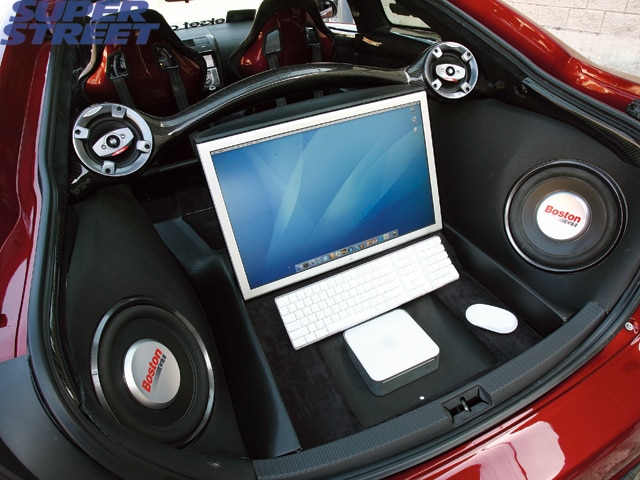 But hold up, wait a minute - there's some crazy, serious business going in Cynce's interior. More than just an audio sensation, there's enough high tech gadgetry to impress the MySpace masses with computer gear that's faster than even any of the desktops our art directors use. Check the trunk for a custom-mounted Apple Mac Mini, 23-inch Apple LCD monitor, Apple i-Sight camera and a PS2! Oh, and there's also some stereo equipment, too: J&G Customs hooked the tC up with a Pioneer AVIC-D2 with navigation, 1000- watt Boston Acoustics amps, front and rear speakers and a 10-inch sub. In the passenger compartment, the factory seats have been upgraded to Cobra Imola S-GT seats that have been recovered with black leather and suede accents by Stitchcraft. AEM gauges, like a Tru Boost, wideband AFR and oil temp, were mounted along the C-pillar while Sparco helped out with a Mugello steering wheel, Globe shift knob and carbon fiber pedals.

If building this tC has taught Cynce anything, it's that building tuner cars isn't easy, especially if it's for a big-time event like SEMA. She says, "Pre-planning, pouring my heart and soul into it - not to mention my wallet - is all very crucial. And you'd be amazed what a little black dress can do for you at SEMA."