The power of the SR20DET goes beyond the race track 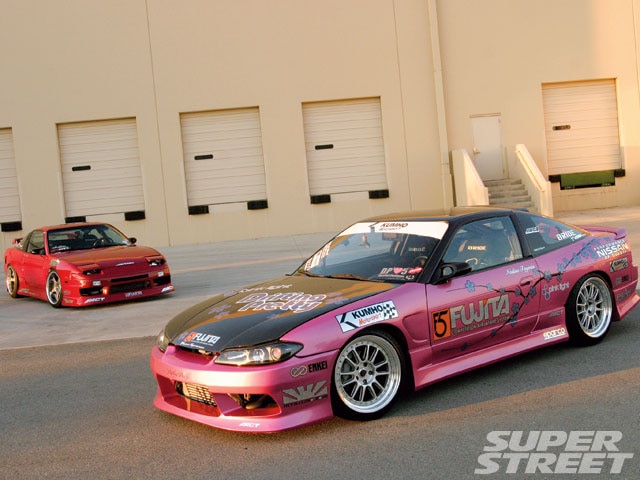 This is a story about romance and cars, two themes that are as conflicting as Israel and Palestine, Harry and Voldemort, Rosie and Donald, uh, you get the point. It's not supposed to happen. Cars are for manly men. Romance is for gutless, purse carrying busters who weep at romantic comedies and Kodak commercials. But the tables have turned. Meet Benson and Nadine Hsu, a couple connected through a love for the Nissan 240SX and the sport of drifting, proving that romance and cars can actually be one and the same. 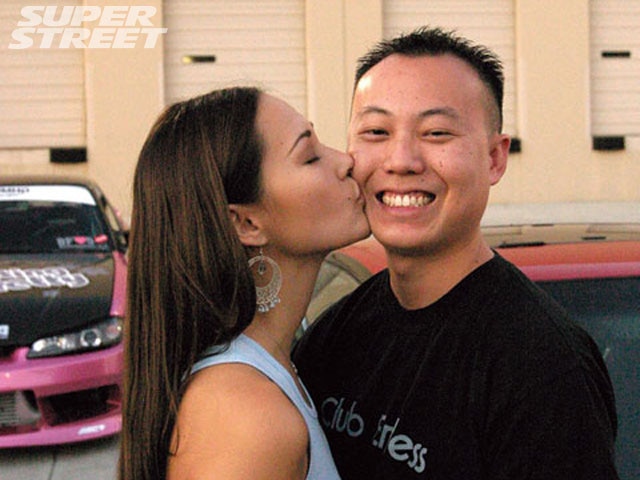 They met seven years ago at an online community for 240SX enthusiasts, which hosted monthly events where everyone nerded out to what is now a drifter's choice of ride. They decided to carpool to these events, where they started to gravitate towards each other, sparking up a lovesick chemistry only a Tom Hanks-Meg Ryan movie can emulate. Or as Nadine puts it, "After a couple of months of meeting and pursuing him, I wondered if he was gay, until he finally asked me if I wanted to `go steady,' which I happily agreed to." Since then, they've become professional drifters, tied the knot in 2006 and built their dream cars, two of the most impressive 240SXs in the industry. 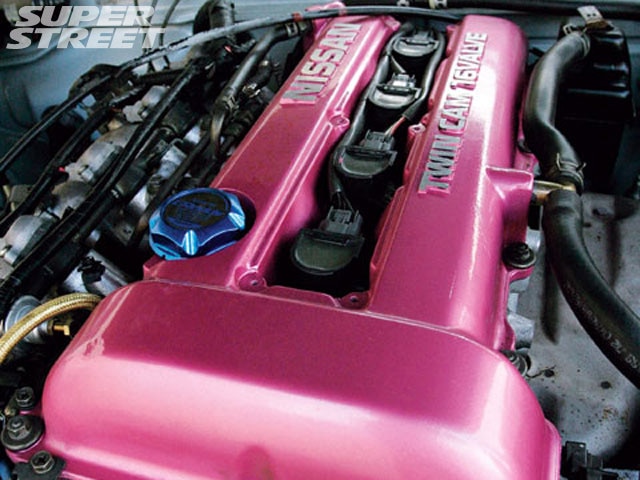 Nadine's ride is an '89 240SX powered by a SR20DET that throws down a stout 300 hp when it skids through the corners. It's a dedicated drift car that spearheads the all-female drift team, Drifting Pretty, which was also founded by Nadine in 2003. Designed for a rapid spool up and low- to mid- range power bands, an A'PEXi AX53 turbo commands the SR20's size-to-output efficiency. It can create upwards of 600 hp depending on the application. In this case, the application features 740cc Nismo injectors, Sun Automotive Hyperground setup, and an A'PEXi Ex Ti exhaust system, all of which produce enough power to the 18x9 Enkei RP03 wheels, gracefully pushing Nadine to sideways immortality.

Her drifting skills are much owed to her husband, who helped her learn the sport. "Benson is my mentor," she explains, "He's helped me jump so many hurdles in drifting. He makes sure I learn new tricks at every event, and above all, he's been there during the hard times, when I cry like a baby because I get frustrated with my driving." They even compete against each other in various drifting events in the country, though Benson has the upper hand in races won. These battles don't transfer outside the track, where they're more supportive of each other. Benson's expertise in the sport pushes Nadine to perform better, especially when gender plays a big role. "Women are different than men," Benson clarifies. "They really need a lot of emotional support when they're out competing in a male-dominated sport. So when I help her, I'd probably say it's 80-percent emotional support and 20-percent technical." 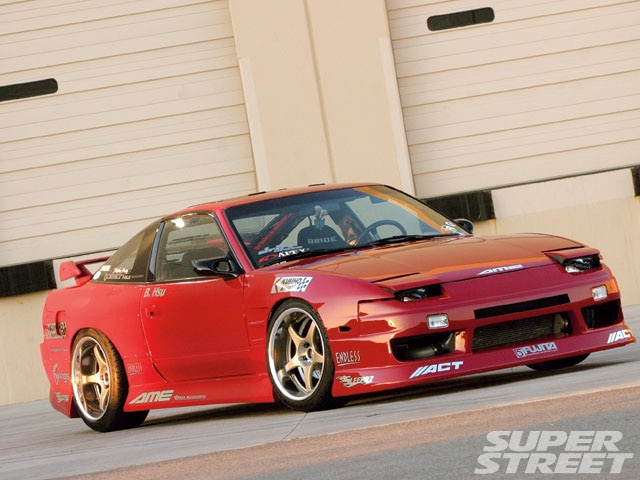 Benson knows the hardships of becoming successful on the track, whether it's driving or building the right car. He has owned one car all his life, this '91 240SX, which is not only complete in all respects, but also historical in the U.S. drifting scene. His car was featured in the first Drift Day, first D1 Driver Search, first Drift Showoff, which he won, and first season of Formula D, where he raced in Irwindale, Houston and Atlanta. His car is on its third engine, third set of suspension, has burned through five clutches and has been painted twice. "I learned everything about cars, racing and drifting with this car," Benson adds, "But the most important thing is if I didn't have this car, I would have never met Nadine." We'll give you a few minutes to get your barf bag. 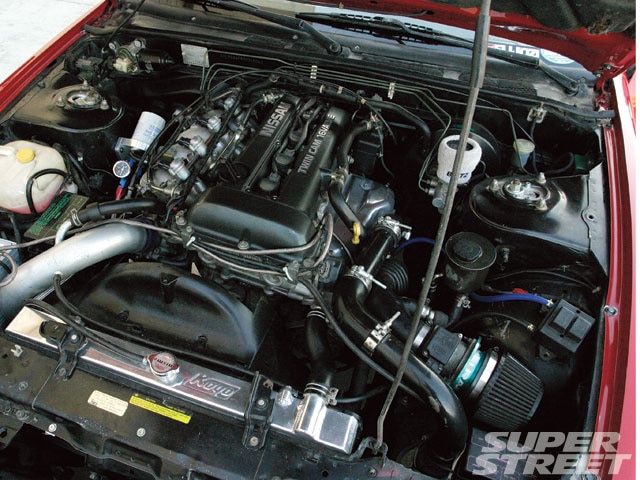 Benson's 240SX, not surprisingly, also has a SR20DET with an OEM S15 turbocharger, Tanabe Racing Medallion exhaust, HKS Type-S intercooler and a Mine's tuned ECU. His car produces 220 hp at 1 bar and rides on a set of 18x9 AME Circular Spec R wheels, custom painted a light gold. He's owned it for seven years and dropped stacks of coin to improve its mobility and good looks, making Benson request a call to the public not to "jack him." After all, he's a married man who needs to protect his investments. "At this point in my life, I'm trying to figure out where drifting and cars fit," Benson says, "My priorities have totally changed and I'm trying to find that perfect balance, though I'm sure I'll be drifting cars until I'm on my deathbed or until tires aren't made anymore."

The couple has graduated to one of the hardest aspects of the sport, tandem drifting, in which a set of two cars follow each other throughout the track using the same lines and speed. Tandem drifting is often employed in professional competitions, where the lead driver feints maneuvers to upset the chase driver and to see how close the chase driver can get to the lead driver, where sometimes an overtaking occurs. It can also be an aesthetic exhibition of skill and technique, where numerous cars parade around the track not once colliding with the other. Benson and Nadine have an advantage in case a collision happens during a tandem drift. "I know at the end of the day, if we crash, it's going to be okay because what's mine is his and what's his is mine," Nadine laughs, "So no blame will be passed."

"But the bad thing is that if we crash," Benson adds, "That's double the cars we have to fix!" Either way, they have enough love for each other that if one messes up no penalties are incurred, like sleeping on the couch or no bumpin' uglies for the night.

One of Benson's favorite photos in their living room is of them tandem drifting. "It's like taking the `couple's picture' to the next level!" he says. It's also something that's rare in the industry because there aren't many husband and wife tandem drifters out there. This connection is why Benson and Nadine are as unique as a married couple can get, a link that creates an enduring relationship and even a stronger will to win on the track.

Props Benson--thank you for being one of my inspirations in the build up of my pink drift monster. Without you, I wouldn't have been able to focus and re-build this car, let alone drift it! Thank you for introducing me to the wonderful world of drifting and thank you for showing me how to be an awesome ricey dori gal; to my daughter Kristy--I love you honey, and I hope I can help you build a cute drift car in a few years; big thank yous to Richard Tang and Fujita Air for your help in the finishing touches of my car; Andy at MyNismo.com/Performance Nissan--thanks for fitting the ol' S13 with such extravagant parts--your faith means so much;farewell to Enkei and thank you Tobin, who gave me a chance over at Enkei (best of luck to you as you trek on in thisindustry with Falken. Schikane fo lyfe!!); last but not least, thank you to the wonderful, faithful members of theDrifting Pretty program. You ladies fuel my drive to keep going and strive never to leave the drifting world in this lifetime.

Props First of all, my wife Nadine and little Kristy who have always been supportive of me and thetime and money spent on my car; Kent & Dominic at AMEWheels and Endless USA; Jim Desmond at Sleeperz; Harp at Taka Motorsports; Robin at DesignHaus; C-Wings; ACT; Phase2 Motortrend; Superior Nissan; Tanabe;Battleversion; and KAAZ