Home  |  Features  |  1987 Toyota Cressida - Too Many Styles, Not Enough Cars
Subscribe to the Free

So you're asking yourself, "WTF is your grandpa's ride doing in these pages?" Well, hopefully I can convince my boss into making this a future Super Street project. What do you think? Probably not, but let's try. Unfortunately, not all us have cars as nice as the ones we feature.

Some say that in Southern California, you are what you drive. This melting pot of culture has given me multiple personalities. When it comes to cars, I like them all. I've had domestics, imports, old cars, new cars, beaters and luxury cars. If I can slam it, I'll like it. Building several cars to suit all my interests just isn't possible (at least on an editor's salary). So I sold my VIP Lexus, my lowrider Monte Carlo and my old Starlet project. To wrap up most of my interest in one daily-driven car, I bought this '87 Toyota Cressida. Yes, a Cressida. Like me, you've probably heard they can be pretty cool, but I had no idea how badass they could be. This oddly brick-shaped car comes with all the amenities of a newer car: power windows, leather and powered seats! Perfect for a daily driver. Now to make it badass, I'm planning a 2JZ-GTE swap (Twin turbo Supra engine)-yes, it pretty much bolts in. You can even stuff a Lexus V8 in there with mounts from my boy Peewee from down under. To completely make this car ridiculous and lay the car out on the pavement, I'll have to figure a way to install an air bag suspension. And to make it JDM Wong-approved, I'll be using parts from its JDM siblings: the MarkII, Cresta and Chaser. Hopefully, I'll be able to finish this silly-ass project.

Under The Hood lots of dirt, an oil leak, an exhaust leak and soon a BHG

Brains none here, thank you

Outside the incredible Hulk cracked my windshield

1987 Toyota Cressida - Too Many Styles, Not Enough Cars
Photo / 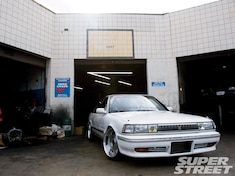 1989 Toyota Cressida - Fish Out Of Water

Driving is in his blood, you can tell by his 1989 Toyota Cressida. We recently caught up with professional drifter Ken Gushi at Asari Auto, his dad's auto repair shop. - Super Street Magazine