The Sport Of Hatin' Is Back, And It's All Because Of Dr. Craig Mechelke And His Custom Widebody '94 Toyota Supra 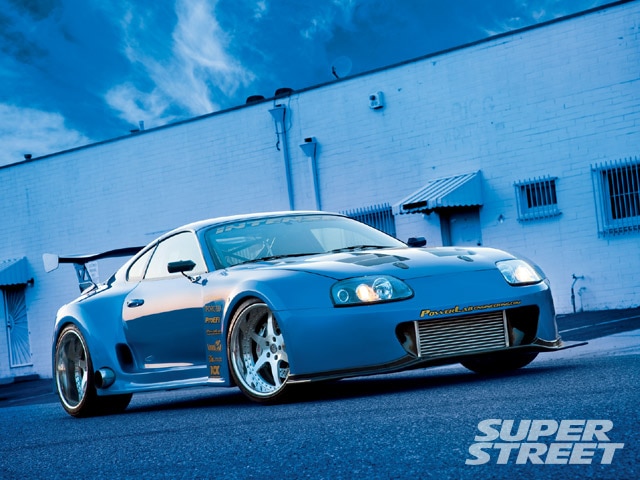 If money weren't an issue, I'd bet my rare collection of sealed vanilla-flavored dipped Yan Yan snacks from 1998, that we'd all have at least one Toyota Supra parked inside our garages, along with a Nissan Skyline, an Acura NSX, a Mitsubishi Evo and a "Uni-Market 5" Donny Baknot-custom made Jeepney that holds 16 passengers. And nestled in between these rides would be a couple of sick Honda Ruckus scooters and Babylonian stack of A Bathing Ape shoe boxes filled with beautifully colored BAPE-stas that would be donated to the Goodwill because they're "sooo Fall 2008."

But since money is an issue, as evidenced by my recent binge of the rare Yan Yan snack collection, because I was too poor to even buy myself a five-dollar foot long, having a garage like that is just a mere fantasy dream, while we lumber through our meaningless jobs, making our measly minimum wage and patiently wait for Barry Obama to give us a much-needed handout.

The lack of funds in the wallets seems to be a part of the current state of many tuners in America, and it seems to be the main reason why the Sport of Hatin' is on an astronomical rise, reaching levels unseen since Tom Jones began wearing tight pants that revealed the enormity of his man package in the mid `70s. It's also the main reason why we're probably gonna start hatin' on Craig Mechelke. Not because he's punctual, has all his teeth, and can read and write above the 10th grade level, but because he owns one of the most complete -- from top to bottom, from inside and out -- Toyota Supras in the nation. And to put the proverbial cherry on top, Craig's daily grind involves the handling of and fingering of many vaginas, and I don't mean that in any offensive way whatsoever. See, Craig is a doctor of wizard sleeves, also known as gynecology, where seeing the female form is on the daily occurrence. So take off your "Freelance Gynecologist" ironic T-shirt, pull out a pen and paper and take notes. You may still have a chance to be like Craig, but if not, you can at least list out all the other reasons why you would hate on this guy.

"I wanted to build the baddest street Supra in the world," Craig says, "A car that can not only compete in the performance scene, but can also bring home trophies in the show circuit. I also did not want an off-the-shelf bolt-on looking car, either." So his first task was to differentiate the look of his Supra from the countless Supras that not only graced these pages, but also the many that have toured the world, been featured in movies and raced around many famous tracks. So he began a search for an exterior look that needed to be original as well as functional. He took his car to several body shops around the Gilbert, Arizona area only to be disappointed. He finally ended up inside Highline Finishes, the body shop division of IntensePower and received a concept design that was custom and practical.

Highline Finishes ended up creating a one-off kit for Craig's Supra, which featured a wide body stance and a variety of carbon-fiber details that would make an F1 chassis jealous. The designer of the kit is Han Wong and he based the design on the ever-famous, oft-copied Top Secret GT300 kit. This exterior set up alone would make haters around the globe shake their heads, but the Lamborghini Monterey Blue paint would make the same haters shoot themselves.

Underneath the hood, Craig continued his trust with IntensePower and had them build the 3.0L 2JZGTE motor from the ground up. With a compression ratio of 9.0:1, the engine sports a set of HKS camshafts with a 9.3mm lift and 272 duration, a team of Wiseco pistons, Supertech valves, Blitz 1000cc fuel injectors, and a PowerLab triple intank assembly with Walbro fuel pumps. The breathing is worked on by a intake-to-exhaust system that starts off with a PowerLab custom carbon-fiber airbox with twin filters that sucks in the atmospheric air through a ProEFI 100mm billet throttle body, all of which is farted out by a PowerLab custom twin turbo manifold setup and custom IntensePower side-exit 5-inch exhaust. But, really, the main thing that's making this Supra move are two Fastrax turbochargers made from a custom hybrid of T3/T4 snails. The turbos' entourage includes a TiAL 50mm blow-off valve, PowerLab custom 4-row core with V-Band connections intercooler and a ProEFI boot controller solenoid. The entire engine bay is beautified by polished AN fittings with a dash of carbon-fiber composites throughout. Add in a IntensePower custom direct port nitrous kit made by Nitrous Express, and you have yourself an approximate push of 1,000 horses at your grasp.

If you need more reason to be hater playa' of the year, pull out your surgery stirrups and check out what's underneath the Supra's skirt. Craig asked for a major suspension rehaul and IntensePower provided. They installed a set of HKS Drag Coilovers that lowered the Supra 1.25 inches on all four corners, while providing a launching pad for the ultimate in 1/4-mile performance. Further stiffening the widebody chassis are TRD front and rear stabilizer bars, IntensePower custom made front and rear strut braces, and an 8.5-second NHRA-legal chromoly cage. "The fact that this is an NHRA legal chassis sets it apart from all the other cars in the show scene," Craig boasts. But it also sets it apart from the cars on the track as well. Working the stop the 20-inch iForged Flux wheels wrapped in Pirelli PZero Rosso tires from rolling are front and rear Brembo Grand Turismo brakes. If these brakes fail to stop the Supra on time, Craig is safe when the NHRA-approved parachute is pulled out, stopping the car before hitting the wall.

I don't even want to get into the interior and how svelte it is inside. "To build the car, it cost me $150,000," Craig says, "It was all worth it though because you won't see Supras like this around much. You may now put back on your "Freelance Gynecologist" T-shirt and be off with your hatin'. And thank you, Dr. Craig, for making us feel bad.