The King Of Wiring Brings You His Own Personal Masterpiece 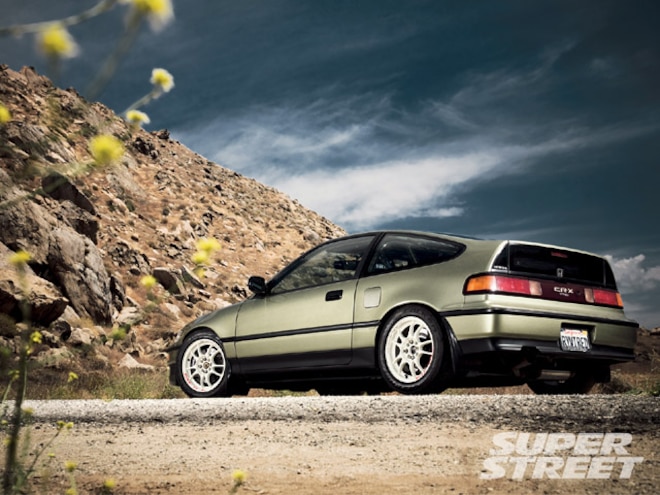 Hondas have really made a return to the spotlight in a big way. Not so much for all the hoopla and obsession over what's "JDM" and what's not. That's old news. And no, big body kits have not made a comeback either, despite what some guy on whatever internet forum claims will happen. Hondas are back in a big way because people have gone past just simply purchasing JDM parts and have taken customization to a whole new level. Custom fabrication is the weapon of choice now and enthusiasts have really gone above and beyond to set themselves apart-particularly in their engine bays. A simple wire-tuck just doesn't cut it anymore. People are shaving engine bays, tucking brake lines, and doing custom fuel line set-ups. Many have gone as far as to do full brake booster deletes and clutch master cylinder tucks. Doing engine bay wire-tucks are almost as common now as lowering a car and getting wheels. The new hotness right now isn't even tucking wires. Enthusiasts are showing wires now but in "mil-spec" form. Mil-spec harnesses are custom engine wiring harnesses that have tefzel wiring, new pins and plugs; all shrouded in Raychem heat shrink. The coolest thing about it is the mil-spec disconnect is that it's visible on the firewall. No mil-spec harness is complete unless you get to show off the quick-disconnect. If you're wondering what that plug looks like, just imagine the big plug that OCP used to shove into the side of Robocop's head. Ryan Basseri, better known simply as "Rywire", is probably one of, if not the most well-known custom harness creator within the Honda community. He's responsible for creating some of the best engine harnesses around. The guy is a wiring genius and can wire basically anything. In fact, he's even done a full mil-spec Honda Ruckus! We're almost curious to see what his house is like in hopes of finding a mil-spec blow dryer or PC harness. When word got out that he was building a Honda for himself, all eyes were on his build to see what type of custom one-off modifications he would introduce to the rest of the Honda community. He surely did not disappoint.

"I decided to build a CR-X because I've always been a big fan of them," Ryan explains. "They have a bit of a cult-following and I just can't seem to stay away from them. The second generation CR-X is my favorite Honda of all time and I've actually owned about seven of them in my lifetime. I just decided to do up a really nice one this time around." We sense a bit of modesty in those words. Only because the CR-X he had built before this current project was definitely no slouch. This one just happens to be better in every way. If you somehow think that you're a bigger fan of EF-chassis CR-Xs than Ryan, take this into account; his CR-X is his weekend cruiser and his daily beater, which he uses to drive from NorCal to SoCal and back almost on a weekly basis, is an Acura NSX. Now that's love.

"I really wanted to challenge myself with this build," Ryan states. "I wanted to learn how to build a Honda the right way. No short-cuts, just quality parts, quality work, maximum effort. Just do it right the first time you know?" The main problem however, was trying to find quality time. Being a self-made businessman assembling something as time-consuming as custom engine harnesses doesn't leave much personal time to do anything, let alone build a car. "It definitely took a lot longer than I anticipated."

Everyone knows building anything worthwhile takes time but what might have seemed long to Ryan was only a span of five months. It was just a matter of finding time to get all the custom work done. The chassis started out as somewhat of a crusty red shell. Matt Woodworth at Hoodfab was responsible for stripping and re-spraying the entire body in a Desert Sage Metallic tone.

While the EF was in paint, Ryan prepared the K20A for its eventual new home. He modified the Type R head with IPS K2 cams, Eibach valve springs and retainers, and bolted on a polished RBC intake manifold.

Ryan wanted as many eye-catching details as possible to draw attention to his engine bay so he had many things chrome-dipped including, but not limited to; the crossmember, brackets and custom radiator hard-lines. The stock radiator hoses weren't used because of the K-swap and custom cooling pipes were made to accommodate the one-off tucked radiator. Yes, you read correctly, a tucked radiator. The Griffin Thermal Products custom radiator is tucked snuggly under the radiator support and mounted with custom brackets. Coolant makes its way to the engine by way of a custom fabricated upper water neck and K-tuned lower water outlet.

The choice was made to convert to manual brakes also with a Road Sailin' Industries brake booster delete kit. Removal of the booster compliments the "naked engine bay" look that he was going for. It also shows off his ability to create custom brake lines, another skill he provides that sets him ahead of the competition.

Once the K20A made its way into the freshly painted CR-X, Ryan was able to install his Rywire.com mil-spec full race chassis harness. No single electrical component was left untouched on this CR-X. This means that light harnesses and interior accessories have all been "Rywired". He even went as far as to create custom switch-panel and relay/fusebox panels. The stock instrument cluster was also replaced with an AIM Sport MXL Strada digital cluster.

With all electrical tasks accomplished, Ryan sent the CR-X off to RedZone Performance to apply the finishing touches with their 3-inch v-band polished intake and exhaust system.

If you haven't noticed by now, we have probably used the word "custom" more times than ever before. To say that Ryan Basseri's CR-X is a great build would almost be an understatement. It might possibly be the best CR-X ever built. With the hood on and rolling down the street, you might not think much of it other than the paint. Where it truly stands out is in the details and custom fabrication. The guy went as far as to tuck the rear brake and fuel lines, a detail that most builders today would never think of doing. If they did they probably didn't think to do it until they saw Ryan Basseri do it. The Rywire CR-X is just one of those builds that you have to see in person to truly grasp. It's no wonder why he drives his NSX everyday. This EF should be stored in an art museum somewhere, it's an automotive masterpiece. 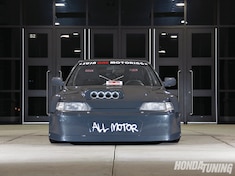 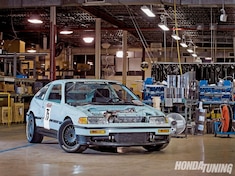 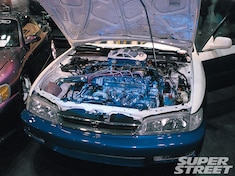 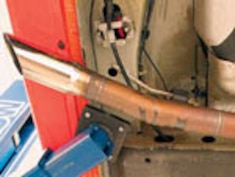 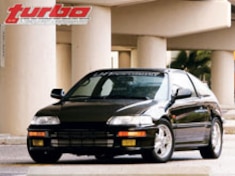