I don’t normally open up Super Street with a full-blown feature but for our annual Japan/JDM issue, I thought I’d break away from the norm. Odd as it seems, and I can’t explain why, cars in Japan that are shot at gas stations get people really excited. What better way to kick off our 2013 adventure to Japan than with the car and the aero kit that’s sparked the most positive car talk I’ve seen over the past few months. At a gas station.

This Scion FR-S is by far not the most modified of most cars in attendance at Tokyo Auto Salon 2013 but the car itself and the sum of its parts were present everywhere you looked. The Toyota 86 and Subaru BRZ were undoubtedly the stars of the show, just like the FR-S was at SEMA 2012. But what the hell is a FR-S doing in Japan anyway? Shops apparently have special access to deals that somehow grant them the ability to import two FR-Ss for the price of a single, Japanese domestic market 86. Aside from the left-handed configuration and minor cosmetic items, it’s a steal—not to mention a great way to prototype certain products.

And this is exactly what Kei Miura of TRA Kyoto did. Well, he started with renderings first. I don’t think from the time we saw them come to light last April until I found out our crew would be building a FR-S of our very own, did I not have my eyes on this Rocket Bunny kit. For months we waited, and finally in late August/early September of 2012 we finally saw an actual kit materialize (the earliest prototype was found on Frederic Asabo’s GT86 in Europe but was mostly fender work). Working closely with Trust Japan/GReddy USA, the first car, a black FR-S was seen with finished panels, bumpers and rear wing; wheel fitment was still an issue since spacers were used. By then we had already negotiated with Miura-san to have him provide us with a kit for our Garage FR-S project and we completed our car beautifully in time for SEMA. Bee*R received their kit early as well, sporting it on their BRZ mostly raw and untouched for a few months until TAS (you can see finished pictures in our TAS coverage). This red one is what got all of us hot and bothered though. It is the original that all others aspiring to use the same kit should use as a basis to draw their inspiration from.

Put together just shortly before ours, this working prototype car (and I mean this in the sense of being able to see a car with matching paint on all its panels with wheels properly sized to the overfender arches) really pulled our heads out of the realm of imagination and fantasy, giving a first look at Miura’s vision for the FR-S that finally was far from a computer rendering—as it was intended to look. The stylish add-on pieces for the front end, side skirts and aggressive rear end are all of the signature Rocket Bunny touches that flow harmoniously with the factory lines (don’t forget, this is all available stateside from GReddy USA as the GReddy x Rocket Bunny kit). It’s slammed using the KW Variant 3 coilovers that seem to make their way onto this car, including ours, and Miura rips on this thing without care for the height of any bumps or the depth of any driveway. He just goes for it. Massive thumbs up. Ultra wide and small diameter 16x10.5" BBS mesh wheels, yet another TRA Kyoto trademark. We can’t beat his touch for fitting wheels as properly as he does, and no, this isn’t some stanced fad wanna-be. No rubbing, no fitment issues. It’s as on-point as one car can be.

What I ultimately want to get across to you is this: Don’t see the TRA Kyoto FR-S as “just another Rocket Bunny story” with “cool photos at a gas station.” The time and effort that Miura spent on this car can be equally representative of most tuning shops in Japan (such as the ones featured this month) in that they are unparalleled in their determination to bring the best to the table (for whichever style they represent), and Miura’s FR-S has successfully become the best in what’s the beginning of things to come for the FR-S/BRZ/86 tuning scene. People want the best for their cars don’t they? If that even sparks a revolution for other Japanese auto manufacturers to come with their own would-be FR-S competitors, then wouldn’t you welcome it? Think ahead, not just what appears simply before you.

This trip to Japan was nothing short of spectacular; it truly does get better with every visit. I hope that as you flip through this issue, you can feel just how special it was for all of us that were involved. Tokyo Auto Salon 2013 might’ve been heavy handed on the 86/BRZ tip, but what else would you expect? It’s the flavor of the month—scratch that, moment. Undisputed. And like always, we tracked down the star features of the show, ready for your viewing pleasure now and in the months to come. We were even given an exclusive opportunity to run wild behind closed doors at RAYS Engineering to meet with their design and R&D teams to see how the TE37 is produced. Lucky? Yes. But we totally don’t mind sharing with you. 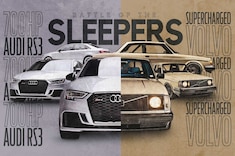