Timothy Desper has brought this 240Z back from the dead

Last summer was one of the busiest seasons I’ve ever had as a photographer and writer. I got to travel around quite a bit and shoot a nice variety of cars, and I even found time to throw in a few personal projects. As the summer drew to a close, I headed to Portland, Oregon, (my hometown) for a friend’s wedding, and at the last minute, I was asked if I could squeeze in a feature photo shoot while I was there. I jumped at the opportunity because even though I had barely any free time, I had always wanted the chance to shoot a Portland car on the city streets. And as it turned out, this 240Z shoot on an uncharacteristically hot late-August day was one of the most rewarding I have had the pleasure of executing.

What made everything work out so well that day wasn’t necessarily the car, although it is a beautifully built machine. No, what made the shoot so enjoyable was the man who built it. Timothy Desper is not your run-of-the-mill car builder but rather a true grassroots enthusiast and a strong believer in the power of hard work. Tim also has a job that is much different from the jobs of anyone else I’ve written about over the years at Modified. Tim is director of operations for the Portland Rescue Mission, a nonprofit organization that provides meals and shelter as well as other valuable services to the homeless. Tim doesn’t make a ton of money, so he didn’t send this car into a shop to be built top to bottom. He doesn’t back down from a challenge, either, because he is a patient and understanding person who has faith in the prospect of change.

“I’ve [worked with] over a quarter million individuals through free dinners, helped house thousands of men, and kept the services at the Portland Rescue Mission running for over six years now,” Tim tells me. “I’ve gotten good at using a small amount of resources and a large amount of passion to help make change happen. I don’t just see potential in old cars, I also see the great potential in the men and women I work with in partnering with them to help build new, very different lives. After tough days or nights working through the tragedy that is common in the lives of those who live on the streets, working on an old car is a good way to redirect my mind and relax.”

Having grown up in Portland myself, I knew that there is a very large homeless population in the city. As Tim and I were driving around finding places to shoot, it seemed like nearly every one of these people we came across knew Tim, and Tim knew them as well, most on a first-name basis. It blew my mind how kind and thoughtful Tim was toward all these people, and it really exemplified the importance of the role he plays in these people’s lives. Throughout the day, I had to remind myself that we were here to work, and it was easy to forget because of how much fun we were having. Tim’s Z is an incredibly cool machine. If you’ve ever spent time around an old Datsun, you know they grab attention wherever they go. Many of the people Tim works with and helps every day had no idea he owned this car, and seeing a smile form on the face of a person who struggles day in and day out just to survive was really cool. Cars have a way of bringing people together, especially a classic car like this.

This particular Z gets even more attention than most because of its bright-blue Laguna Seca Blue paint and black Diamond Racing wheels. Tim has installed a few subtle but very choice exterior mods, including a custom front splitter, a Xenon front valance, JDM ZG fender flares, and a set of vortex generators on the rear roof line. The body has also been shaved and cleaned up, although it still maintains a very stocklike feel. Tim has done a great job with a resto-mod style on this build; it looks like it could have rolled straight out of the Nissan racing division back in the early ’70s.

The inside of the Z has been upgraded in many aspects, although I noticed that (not surprisingly, but still to my dismay) there was no air conditioning. As we drove through the upscale shopping district of N.W. 23rd Avenue, the fact that it was easily 120 degrees inside the car didn’t bother me much. I was sitting in a surprisingly comfortable Corbeau bucket seat, and the ride quality from Tim’s customized S13 coilovers was not bad at all. Tim has added quite an array of gauges to the car, but aside from that, the interior is minimalistic. The original steering wheel is still in place, a nice touch that I appreciated for its retro charm. Everything in it is there for a reason; there’s no fluff in Tim’s Z.

We found a parking space along the street, so I asked Tim to park and pop the hood. The Z is powered by a modest SR20DET swap with the usual supporting mods. The GT28RS is a good-sized turbo for this application. It’s not too crazy, but just a solid way to get some good power for a fun street car. Tim has also utilized custom-fabricated lines and fittings, as well as a custom fuel cell with a 255-lph Walbro electronic fuel pump. I decided to put on my art-fart hat and try to shoot Tim’s car through passing traffic. I wanted to show this car in an accurate way; Tim drives his Z all the time and is not afraid to park it and let it be seen. He likes to use his car rather than let it sit and waste away.

As the day drew to a close, Tim asked me if I would like to come inside and take a tour of the Rescue Mission. I, of course, accepted his offer, and I’m really glad I did. After we had been outside in the muggy summer heat all day, Tim was still in perfectly high spirits as we walked around the facility. He told me about how he left a corporate job several years ago and took this job for about half his previous salary—and that he wouldn’t change that for anything. Tim loves what he does, and the people he helps love him for that reason. This car is one way that Tim has been able to channel his helping and hopeful spirit into another venue, and I’m incredibly satisfied that I got the opportunity to photograph his Z and take a peek into his unique and inspiring world for one day. If you’re ever in Portland and see a bright-blue 240Z rolling around, go say hello to Tim. You’ll be glad you did.

Thanks The guys at Hybridz.org, Nick Dunn for his friendship and skills, Dennis and Darrell Desper, my supercool wife, Janine, for letting me have car time, and all the guys who supported DIY builds. 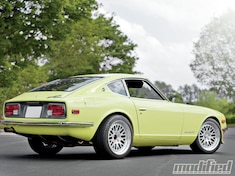 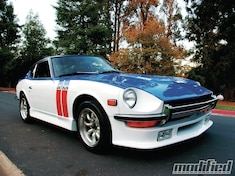