Rationale and logic are far removed

The purpose of the build might seem confusing to some, at least on the surface. Perhaps that has something to do with the fact that there really was no true purpose. The idea developed during a conversation with a friend. Caleb Lesher from Crescent City, California, saw the project as an opportunity to spend hundreds, if not thousands of hours custom fabricating. Although one goal of the build was to produce a dragstrip-ready vehicle, Caleb’s personal satisfaction and enjoyment he receives from the mere act of fabricating nothing into something guided the CRX toward its completion. “I enjoy cutting, welding, and designing, not just bolting stuff together,” he adds. In short, the journey to completion was far more important than the end result—although we’re pretty pumped about the end result!

The original ’89 HF is now a turbocharged, mid-engine, rear-wheel-drive car that produces over 470 hp and 356 lb-ft torque on 116-octane leaded. Take a moment, look over a few of the photos, then wrap your head around the very idea that this enthusiast built this car in his garage, and not only does it run, it runs like a bat out of hell! A basic B18C block and B16 head with an Integra LS transmission make up the foundation of the heart. The main power contributor is of course the turbo; a Garrett Racing GT3582r, to be exact. The bottom end is semi-built using Darton sleeves, OEM pistons, and Eagle H-beam connecting rods. The exhaust system is less than four feet with the exhaust dump tube within a foot of the driver seat. “My first impressions of driving the car reminded me of a loud, angry death trap. I just about crapped my pants the first time I launched it,” he nervously laughs.

You’re no doubt wondering about heat issues with the mid-engine setup, and that too was addressed. The turbo and intake system are designed to produce low air temperatures for longevity and reliability. Caleb states that the air intake temperature stays below 140 degrees even after several runs down the dragstrip. A Frozen boost liquid intercooling system powered by a 12-volt fish tank pump helps to keep temperatures down. “I originally bought a water and methanol injection system, but once I found out how effective the intercooler was, I chose not to run it.”

The uniqueness of this CRX does not correlate to the total build cost. The completed machine totals around $4,000, despite being one of the most custom-built CRXs on the road. Although pricing was kept to a minimum due to the fact that most of the work was done at home, Caleb uses a cost-benefit analysis when selecting parts. There are a few areas where costs are secondary in importance; things like the bottom end, suspension, and engine management. “However, I think that a lot of the time lower-grade parts can be just as good as more expensive things as far as functionally—just less bling factor,” he explains.

One of the more challenging aspects of the project was the large volume of projects and tasks. Some systems needed to be in place and working before others could even begin. This part could not be installed until this weld was completed, etc. Not surprising, frustration peaked throughout the build. “I learned to focus on one small task at a time instead of being overwhelmed by the whole thing at once!”

Caleb created the wiring harness used for this application, and as such, several weeks were devoted to researching wiring schematics, wire color definitions, and pinouts before beginning the process. “Once I started cutting and splicing wires, the process went relatively quick.” A pattern began to form. Wires were a power, a ground, or a signal, and interestingly enough, the engine turned over on its very first attempt. This was an impressive victory considering this was his first attempt at a wiring harness. That is, unless you look at the overall build and realize that Caleb has all of the ability in the world to troubleshoot and make adjustments when needed.

In order to accommodate an engine rather than storage space, the CRX needed to be completely redesigned. Throughout this portion of the build, one error could have potentially scrapped the entire build. “I tapped, shimmed, and measured for hours before making the few first welds.” He experimented with various spring rates, shock rates, caster, camber, and toe settings to find the combination and setup he desired. The fabrication and welding were performed using a hand grinder, reciprocating saw, and a borrowed metal inert gas welder. Caleb was pleased with himself the first time the Rex hit the pavement, presumably because it drove in a straight line without issue.

In closing, Caleb would like to comment that he never had formal automotive training, nor did he have any fancy, high-dollar equipment at his disposal. With his starting the Honda learning curve much later in life than most, people thought he was crazy for trying the build with his limited knowledge and resources. Regardless, he pushed forward, and there’s a personal satisfaction to all of the madness. “Doing something totally crazy and watching people’s jaw hit the floor is a hard feeling to beat.” Caleb might try to build an all-wheel-drive Integra or a Glasair Super II kit built airplane. Who knows? Caleb doesn’t need rationale to guide the next adventure, but one thing is for sure, there will be more adventures. Stay tuned.

Props
All of my friends from McKinleyville, California

Dream Car
I own them!

Inspiration For This Build
To do something crazy 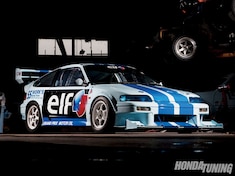 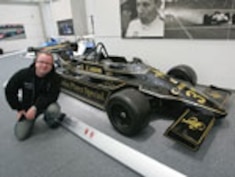 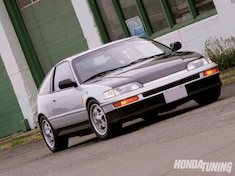