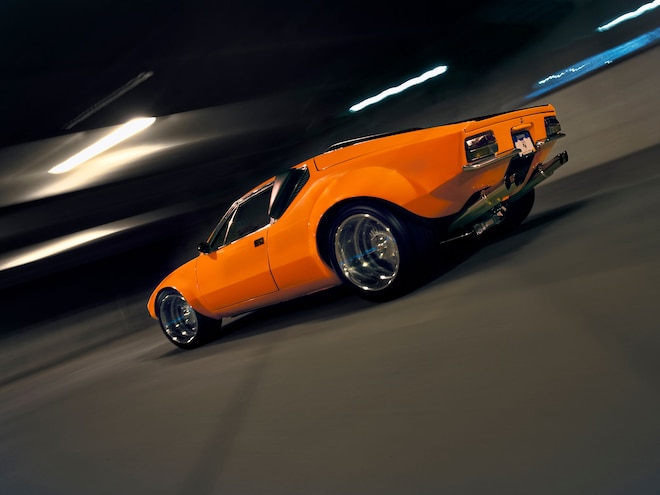 While modern cars equipped with substantial aftermarket parts and custom body bits are often deemed feature-worthy, few share company with this one-off creation. In fact, forget what you thought you knew about custom cars, because this Pantera redefines the segment. Every nut, bolt, clip and panel has been replaced or fabricated, making this beauty more rolling artwork than car.

"I've been fascinated with cars since I was in diapers and was raised in a household with classic cars, since my Dad was a partial owner of a restoration shop," owner, Marc Campolieto said. "In the early 80s the shop started doing restoration work on Panteras and that's where I really fell in love with these unique cars," he added.

Of course we don't have to tell you how wicked the De Tomaso Pantera is, because as you know, it was designed by American designer Tom Tjaarda and built in Italy at the De Tomaso factory. The steel monocoque design was ahead of its time back in 1971, as was the well-appointed interior with such luxuries as power windows and a cigarette lighter.

What wasn't quite so cutting edge, though, was the pushrod American V8 that sat behind the driver. Oh yes, for those unaware, the Pantera is a mid-engine supercar and it's got plenty of grunt thanks to a 5.8L Ford V8 under the bonnet good for 400hp. The 3100 lb rockets were harnessed by a ZF transaxle, and various magazines recorded 0-60 times of just 5.5sec with a top speed of 160mph. Don't forget, this is 40 years ago!

Early Panteras were sold at Ford dealers, but after poor reliability and small sales numbers, Ford discontinued its sales partnership in 1975. After Ford dropped the Pantera from showrooms, only a handful of shops imported grey market examples, which meant US production numbers were minimal at best. The final Pantera rolled off the De Tomaso assembly line in 1991, ending the era of a unique supercar with the chassis of a European sports car and the heart of an American hot rod.

"I've owned many nice European cars and currently own an Aston Martin Vantage and a modified Shelby Mustang GT500, and yet the desire for a Pantera never died, but I didn't want just any example, I was looking for a project with a colorful history," Campolieto said.

After countless dead-ends attempting to find the right example, Campolieto got a tip from a fellow Pantera enthusiast at PI Motorsports (a renowned Pantera shop in Orange, CA) that Pantera International (another shop specializing in these rare cars) had recently acquired a former racecar. The car had been baking in the Las Vegas desert for decades and was begging to be rescued.

"The guys at Pantera International bought it from a gentleman who acquired the car when his father passed away," he explained. "It was a racecar in the late 70s and at one point it had a built 351 Cleveland motor, Weber carburetors and Group 4 wide fenders - it was eventually put out to pasture in Las Vegas where it sat for years."

Just days before Pantera International was to start using the weathered ex-racer as a parts car, Campolieto rescued it with a deposit. A few weeks later he arrived with an empty trailer and started what would become one of the most intense restorations we've ever seen.

"It was in rough condition from sitting in the desert for so many years and it lacked an engine and transmission, but as they say in the hot-rod industry, it was straight and it was all there - even the remains of a dead bird," he laughed.

Although the road ahead was long, Campolieto set out down the lonely path to renovation with countless nights in the garage and hundreds of hours in labor. The car was painstakingly stripped down to a bare core and then methodically sandblasted to remove blemishes and bits of rust.

Since Panteras are known to have rust problems, the former racer received plenty of attention in the form of POR15 sealant. This amazing stuff actually seals in rust and prevents it from spreading. We're not just talking about sealing the fender wells either, we're talking the undercarriage, interior, firewall and anything that wasn't slated for paint or powdercoat.

Speaking of paint and powdercoat, the firewall and engine bay were sealed, smoothed and painted in PPG Gloss Black for a show-car touch. As for the powdercoat, every suspension piece was coated with the shiny stuff before receiving plenty of top-shelf parts like Polygraphite bushings-but more on that later.

After the bare shell was prepped and sealed, it received plenty of chassis stiffening braces on all corners.

"The Pantera might have a monocoque construction, but when you run them hard with a powerful motor they can flex quite a bit, so modern chassis stiffening pieces do wonders to brace them up," Campolieto explained.

By now it was time to slowly add more pieces onto the bare shell and this is where the plot further thickened.

"I wanted the best suspension available so I added custom billet coilover adapters with Koni shocks, custom spring rates and I even had the rear axle bearings converted to oversized Timken units since it's a known weakness on the Pantera," Campolieto explained.

Yup, it was the beginning of even more custom work that also included new bearings and races for all suspension pieces along with a PI Motorsports steering rack upgrade, rebuilt factory brake calipers, CNC machined rotors and stainless steel brake lines.

Since the motor that was being built for the project was slated to be rather rowdy, a hefty cooling system was needed. Like most mid-engined sports cars, the Pantera carries its radiator in the nose. While this setup places the radiator in the way of airflow, it also necessitates painfully long coolant hoses to circulate the coolant between the front mounted radiator and the mid-mounted motor. A large Fluidyne lay-down aluminum radiator with twin Spal electric puller fans from Pantera International along with polished stainless lines and silicone hoses, a thermostatically controlled electric water pump and exterior body mods to help with airflow were added to keep the beast underneath cool.

Factory Pantera wiring is another weak point on the vintage supercars so Campolieto set out with the same attention-to-detail when rewiring the entire car - yes, the entire car.

"I re-did the entire wiring system starting with a master fuse to prevent damage to the harness and circuit board along with a Pantera Electronics blade fuse block kit with LED fuse loss indicator and many relays for the cooling and fueling systems," he said.

Re-engineering the wiring system, even on an older car is no small feat, but it allowed him to run such modern amenities like the Pantera Electronics HID headlights and the aforementioned electronic cooling system modifications.

Now past the point of no return, he had to make the big push to see the car to fruition. "It was a massive undertaking that took several years and nearly $130,000, but it was well worth it since I finally built the car of my dreams," Campolieto said.

Like the impeccable underpinnings, the source of motivation is an utter piece of artwork, albeit a powerful one.

"I had the Windsor Ford shortblock bored and stroked to 408 cubic inches (that's almost 6.7L), filled with forged internals like Keith Black pistons, a TrickFlow cam, RHS heads ported by MadCap Racing Engines and topped with a ported Victor Jr intake manifold and a Holley 750 carburetor," he explained.

When fired by the MSD ignition and hooked to the custom PI Motorsports headers and exhaust system the big beast is good for 587hp and 500 lb-ft at the crank. If that's not enough, he's also plumbed a 125hp shot of nitrous that's fed by two giant bottles mounted inside the engine compartment.

Good thing the oiling system of the motor is taken care of with a Milodon 7-quart baffled oil pan while the fueling system is comprised of a refurbished tank, plenty of Aeromotive components and stainless steel braided lines.

With the built bullet ready for blastoff, the last two loose ends were the interior and exterior bodywork. Outside, the car received a show-car treatment that started well beyond the flawless paint.

"The entire body was assembled with stainless steel bolts and washers, the panels were gapped to perfection and each body piece was smoothed for a mirror-like finish - the work underneath is just as important as the paint," Campolieto explained.

The concours quality Tangelo Pearl paint with a gloss black stripe was laid over steel Group 4 fenders that swallow the ultra rare and ultra wide 17x10" front and 17x13" rear Boyd Coddington wheels. On the deck lid you'll find a custom LED third brake light and the patented "sugar scoop" synonymous with the De Tomaso Pantera. Another touch of class came in the form of ram-air ducts that took the place of the rear quarter glass, oh yeah, they're functional too.

Life on the inside of this rocket is also out of this world thanks to plenty of A-grade craftsmanship, especially the leather wrapped and contrast stitched dash and console reworked by Auto Weave. Of course only a keen eye would catch such details as Corvette C4 seats, the factory gauges painstakingly rebuilt by Redline and filled with VDO internals along with the Ford Taurus window motor conversion and the array of new-old-stock switches, buttons and accessories within.

"I wanted the interior to be as classic as it was modern and tidy, so I mixed modern touches like the dash and console treatment with the reworked original gauges and the other period-correct pieces," Campolieto said.

After a multi-year restoration with countless hours invested and a serious pile of cash spent, we can safely say that no bolt, nut, clip or the like went untouched during the flawless rebuild. There's no way around it, the proof is in the pudding because not only was it perfectly executed, but it was also tastefully done. Have you taken your car down to a shell only to modify every single piece that lands back on it? Campolieto has.