Drop those unwanted pounds in no time!

Most waste little time in pulling the spare tire to drop a few pounds. Others delete their rear interior completely. Then there's Jorge Hurtado, of San Antonio, Texas, and his '86 CRX. Jorge (George to his friends) and his Si are originally from Cali, he states, "I purchased the CRX back in '05 for around $300 in Oxnard... I can't remember how many people made fun of the car, including my friends." The car was indeed rough around the edges, but Jorge loved it more for what it didn't have, namely a few hundred pounds of unnecessary gear found in newer-model cars.

Although the CRX has long been praised for its lightweight chassis, the homely mug of the first-gen was often a put-off for tuners, but that was never the case for Jorge. "An LS-VTEC came together, a paintjob, and wheels. The CRX was fun to drive, and it wasn't that nasty anymore." Jorge had a blast with the little Honda until boost mixed with a missed shift resulted in a blown B series. That's when he got an idea for something bigger. "The H22 was just sitting in my garage, and when I pulled the blown motor, I saw they were roughly the same size, plus I already had a B-series trans." After digging through the Internet and some measurements of his own, Jorge found that the dimensions of the H22 were almost the same as the outgoing B series. He also realized that to his knowledge, an H2B swap had never been shoehorned into an '86 CRX. He recalls, "I purchased a QSD H2B kit and started working on fabricating. Using all of the B-series stuff fits better, and you don't have to cut anything up." Using a custom-designed bracket system and HaSport mounts, he found the swap required no frame modding, and after a few days, the CRX was up and running.

After a couple of passes to dial in the chassis and tire size, the CRX put down a respectable 11.88 on 24-inch slicks. Jorge states, "After that run we drove the car home with the slicks rubbing the shocks and rounded off lug nuts on one wheel...time finally came to give the CRX suspension some attention." The old-school Si was treated to a set of Tokico five-way adjustable shocks and Bilstein 996 coils in the rear. Some much needed corner balance and toe corrections had the suspension dialed in for the new Spinwerkes wheels wrapped in 23-inch M&H slicks. Jorge had already removed most of the easy stuff to save some weight, but with the car down for the suspension changes, he proceeded to pull off a few hundred pounds' worth of extraneous metal. He then went further, and shaved an additional 40 pounds with a custom rear axle. After the crash diet, the svelte CRX tipped the scales at a mere 1,375 pounds!

To take further advantage of the weight loss, upgrades in the power department were next on the list. A set of 450cc DSM injectors added more fuel, while breathing was improved with a custom ported intake manifold and 74mm throttle body. On the hot side, a custom Bisimoto V2 Prototype header was bolted on, and 225 hp at the wheels was achieved. Known as a weak point on most H-series engines, the timing belt tensioner was something that Jorge was determined to work around. His solution involved using all Honda parts. He adds, "The T-belt tensioner on this engine is actually a B-series tensioner. The two tensioners are the same dimensions, and I customized it to work with my H22. Now it's fully adjustable." The custom B-series piece paired with Bisimoto cam gears gave Jorge far more control over the tuning of the H22; his new setup delivering consistent 11.30-second runs with trap speeds a hair under 120 mph. Very impressive numbers for an H22 sporting bolt-ons and a ton of weight reduction. In the wake of newfound success, his higher trap speeds gave him a new problem in the form of dreaded lift. He states, "The rear of the CRX would lift and sway when I'd release the throttle above 100 mph. I used iPhone cases to create wind cuts in the rear window, and now it stays straight with no movement. It's so much easier to control."

Jorge is treading in uncharted waters with his first-gen CRX, making headway for others to follow in his footsteps. He's not resting on his laurels, though, and plans on stroking this motor in search of 300 naturally aspirated horsepower and consistent 10-second runs. Finding so much success with such a simple recipe thus far, there's little doubt that he'll reach his goal in no time.

Photo 6/10   |
Essentially a stock H22 with bolt-ons inside of a bare-bones chassis brings home 11-second timeslips.

Daily grind
Everything at H-Car

Dream car
My other first-gen

If your car weighs less, you typically won't require as much power. It's true, just look at Jorge and his CRX, weighing in at a scant 1,375 pounds; he only needs 225 hp to run consistent low 11s. Starting with an already light platform is a great first step, and his CRX weighed in at 1,900 pounds right off the showroom floor. Getting the car under 1,500 pounds, however, wasn't an easy task. He added, "We cut off everything including the bumper supports, exhaust hangers, and crash bar. I made a custom rear axle, even downsized the brakes to save weight." Jorge went so far as stripping all the underbody sealant designed to prevent rust, which might sound crazy to some, but living in Texas means there are no worries on that end. After removing everything that wasn't needed, the CRX's current power-to-weight ratio is better than a new 500-horsepower-plus GT-R! 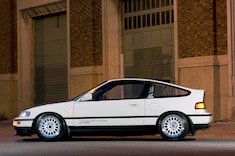 Reynard Maurcio always wanted a new Honda CRX, but since he couldn't just go out and buy one he found a '91 CRX and built it to as close as he possibly could