For the past 20-plus years, the Honda performance envelope has been pushed with a vengeance, sending our community into unchartered waters. But if there's one specific area that has garnered the most attention, both good and bad, it's unquestionably the art of engine swaps. Like large, metallic Legos, every piece of Honda's unintended modular creations has been tampered with, mixed and matched, and used in ways Honda execs could never possibly envision. The almost limitless options have kept many long-term fans interested while also garnering new enthusiasts.

Jimmy Nguyen is no stranger to engine swaps in search of improved performance. His first dive into Honda waters was an automatic '98 Civic coupe that he not surprisingly grew bored with, and decided to swap a five-speed B18C5. It was his first time behind the wheel without the assistance of an automatic slushbox, and admittedly, he wasn't exactly a natural. He explains, "I got a ticket the first day it was swapped to five-speed because I was still learning how to drive a manual. I burned rubber when taking off when I was on my way to work, and a cop pulled me over for exhibition of speed!" No doubt a sour experience, but one that he chalked up to a taste of bad luck. His next project was a little more complex. A '92 Integra served as the foundation, while the powerplant consisted of a B20 block and a VTEC head. Not long after the swap, another bout with bad luck came in the form of a fender bender. The next few years would serve as a long break from cars completely.

He explains, "I was out of building cars for five years, until I was in Little Rock, Arkansas, where I was working. I started looking at a car to buy, but wasn't looking for anything in particular, just something cheap to daily drive. I came across a red CRX in Jonesboro, Arkansas, and made the drive down there to check it out." What Jimmy found was a somewhat stock CRX armed only with a "mini-me" VTEC swap and a cherry bomb muffler. A thorough once-over and, with the body in good condition, a deal was struck. Between the time he'd first began looking for a daily driver and the time that he actually purchased the CRX, Jimmy had already compiled a parts list for his new car. "I knew what was going to be done to the CRX. I drove it around stock for maybe a month or so while I was in Little Rock."

Relocating back to California, Jimmy and his friend Phirun wasted little time and completely stripped the car to a bare shell. Late-night stints of tracking down and ordering parts became a regular occurrence as Jimmy's wish list grew smaller and smaller. He adds, "I found an EF8 bumper, rear foglight garnish, and 16v wing on Craigslist. Then I ordered EF8 headlights and doors from N1 Concepts. I would be on eBay and Craigslist looking for parts all the time."

With much of the exterior parts in his possession, Jimmy began on the bodywork himself. He sanded and straightened the body to the best of his ability before the car underwent a complete color change to Ibis White from an Audi. "After the paint, I focused on the motor. I had a buddy who was parting out his '94 Prelude, so I bought the H22A1 long-block from him. I contacted QSD for an H2B kit, but then I ended up ordering most of their catalog at that time." 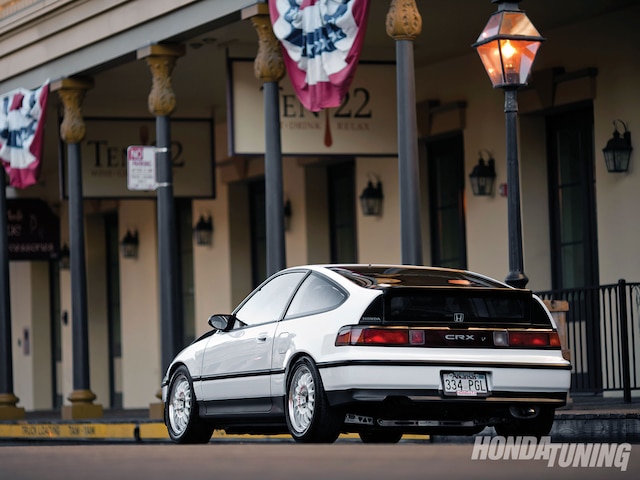 On the "H" side, the engine was fitted with Type S pistons and ARP head studs with a Supertech-equipped head and Blox B cams adjusted by AEM adjustable gears. On the cold end you'll find 52mm TWM individual throttle bodies, while on the opposite end is a High End H2B header and custom 2.5-inch exhaust system.

On the "B" side sits a JDM B16 transmission and Integra axles. The CRX engine bay isn't the largest by any means, and with the sheer size of the H series, one might assume that a cluttered, overcrowded bay is to be expected. Jimmy wanted a well-balanced car that looks every bit as good as it drives. He adds, "When it came time for wiring, me and my teammate did the wire tuck, then the brake line tuck. Then me and my pops dropped the motor in the chassis, and I took the car to West Lane Muffler and Performance for tuning." The combination netted an impressive 257 hp with over 170 lb-ft torque. Perhaps more important is the fact that the close gears of the B series trans ensure that power is never far away.

With the added grunt of the H-series mill, the factory HF brakes wouldn't stand a chance. To offset the newfound power, a complete Integra caliper and rotor swap was in order, along with Hawk pads. Spotless Sprint Hart CPR wheels wrapped in Falken Azenis complete the classic white-on-white look.

Jimmy certainly isn't the first to come up with the "big engine, little car" scenario; decades of hot rodding make sure of that. What he has done however, is taken a unique approach in building his CRX, incorporating a classic look with a massive leap forward in performance.

Props
I'd like to thank my family, my fiancee Nicole Phan, the crew DSDone, West Lane muffler and Performance. Thanks everybody for the support.

Inspiration for this build
My crew dsdone and my family

Future builds
Hopefully none, I'm still enjoying this one

The topic of H2B swaps versus B, K, and standard H swaps goes back a number of years and far too many pages. Here are a few things to consider when thinking about an H2B setup.

Cost: when you break down things like engine mounts, engine management, etc., the K swap tends to be quite a bit more expensive than the H2B.

Displacement: A K24 will net more torque right out of the box, but again, price may be an issue.

Fitment: H2B will reposition the engine higher than a standard H swap in order to get the correct axle geometry. This means that most swaps will require the hood to be lifted a few inches in the rear for clearance.

Ancillary parts: Due to the vast array of B- and H-series parts both new and used, the price for "extras" when completing the swap is reduced significantly.

Availability: Hit any junkyard in your area and you're bound to find H- or F-series long-blocks and B-series transmissions. Search online and you'll find them even quicker.